China has spent more than half a trillion dollars on building the world’s largest high-speed rail network system.[1] This system has revolutionized the way business is done by dramatically lowering the time and cost of getting around the country. Additionally, it has significantly reduced the growth in China’s domestic flight industry, by far the greatest contributor to China’s greenhouse gas emissions in the transportation sector. While this system has proven effective at reducing emissions in the short run, it is also fueling a new appetite for travel that was not present before in the vast majority of Chinese citizens. The Chinese government will have to reassess its fare subsidies in order to ensure that its massive population doesn’t become hooked on travel, which could spill over into higher demand for auto and airplane travel. 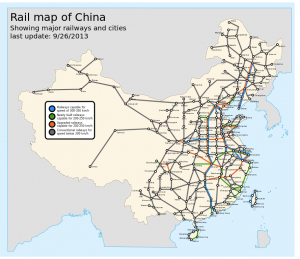 One of the greatest areas that China has mitigated its emissions is in domestic air travel. While emissions from domestic flights increased steeply during the 1990’s and the first half of the 2000’s, these increases have slowed down significantly since China opened up its first high speed rail lines. This is because the Chinese government has set high-speed rail prices at roughly half of what a plane ticket for the same route would be. Many air carriers have given up completely on travel routes of less than 300 miles, and they are struggling to compete on routes up to 470 miles.[1] These trains are running at capacity, however, as almost every single train route is sold out in advance.

These government subsidies have greatly contributed to a reduction in the number of domestic flyers in China, but that number is set to increase again. The low train ticket price has forced air competitors to lower their prices as well in order to compete. When this phenomenon is coupled with the meteoric rise in China’s blue-collar wages, is risking offsetting much of the gain made by the initial switch to rail. The Chinese government may have to consider ending or reducing its ticket price subsidies to ensure that these important gains are not lost. Otherwise, a race to the bottom between different transportation options may ensue.

China is also coupling its massive high-speed rail expansion with equally ambitious subway drilling. Half of the subterranean drillers in the world are now working in China, as this massive effort is required just to keep pace with rapid urbanization. Considering that China has more first-time car owners every day than anywhere in the world, this strategy is an essential piece of their overall emissions reduction strategy. At the same time, the United States has consistently decided against drilling subway tunnels in many of its fastest-growing metropolitan areas. This includes Austin, where the soft limestone would actually make it one of the most economical underground projects in the United States.

One of the most concerning aspects of China’s railway expansion is that it is changing the preferences of Chinese people. Much of China’s population is still rural and generally tied to ancestral homelands.  A large part of the labor force in large cities consists of migrant workers from these rural regions who leave their families behind. Before rail expansion, most of these migrant workers would only be able to travel home once a year – for the Chinese New Year. Many of these same travelers are now making monthly, or even weekly trips to see their loved ones.

Additionally, China’s success with high-speed rail has been modeled as a strategy for other nations. What seems to be behind this success, however, is that China is one of the most densely populated countries in the world (even more so when excluding Mongolia, Xinjiang, and Tibet). Many large economies, including the United States, lack the density required to make high-speed rail a successful abatement strategy. C. William Ibbs, a professor of civil engineering at the University of California, Berkeley, observes that, “except for Boston to Washington, D.C., we don’t have the corridors of high population density that China has”. Considering that most of Europe’s railways have been modernized, India is the only other large economy with great enough population density to make high-speed rail a viable alternative to auto and airline travel.

All in all, China is one of the few shining stars in the developing world by subsidizing low-emission train travel instead of gasoline. This article, however, also shows that even the right subsidization policies can have unintended consequences. It remains to be seen if a rising Chinese middle class will remain content with cheap high-speed rail options or if they will inevitably choose car ownership and cheap airline tickets as their paychecks grow. Despite these concerns, China’s transport development strategy is keeping many Chinese off the roads and out of the skies in the short term, and may prove to be an effective blueprint for other developing nations.