Black carbon is a problematic short-lived climate forcer. While global emissions of black carbon are far lower than those of CO2, the sooty particulate matter has an approximate GWP20 of 2200, meaning its warming power is far more potent than that of CO2. Black carbon is emitted by inefficient combustion of biomass and fossil fuels, making residential burning, transportation, industry, and agriculture all culpable sectors. Industry, in particular, presents an interesting opportunity for emissions reductions. The majority of industrial emissions result from coke and brick production, with coke production being far more concentrated—in 2011, 60 percent of global coke production took place in China. 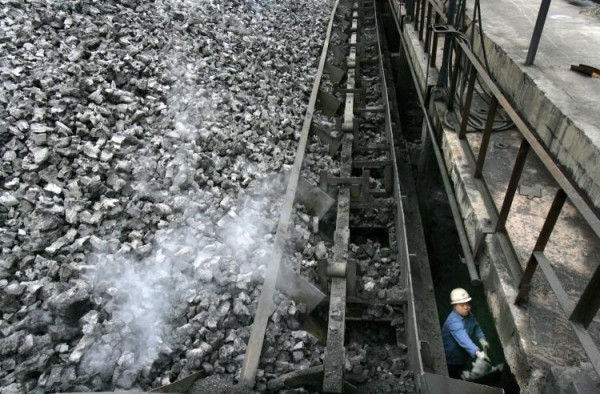 Coke stockpiles at a steel plant in Chongqing, China.

Coke is a super clean fossil fuel made through pyrolysis of coal, which is used in industrial processes requiring very high heat, such as iron production. Coke itself burns very cleanly, however its production emits large concentrations of particulate matter. This section focuses on coke dry quenching (CDQ), a technology that can significantly lower black carbon emissions from coke production. Because of China’s major role in coke production, CDQ adoption in China is of particular interest.

These policies caused a large, very quick, technological shift from traditional technologies to mechanized technologies, which produce far less black carbon. From 1990 to 1995, 70 percent of China’s coke was produced using traditional ovens; by 2010, China produced over 99 percent of its coke using machinery coke ovens. Despite this huge success, black carbon emissions from coke production still make up 15 percent of China’s black carbon emissions, and have been steadily increasing—a direct result of intense growth within the industry.

In most coke producing regions, major steel and iron conglomerates are responsible for coke production, making the issue relatively concentrated and therefore easy to address. This was the case in China prior to 2008. Since 2008, however, the Chinese government has actively promoted adoption of dry coke quenching technologies. The Ministry of Industry and Information Technology of China started the Program of Promoting Coke Dry Quenching Technology in Iron & Steel Industry and Coke Industry in 2010, with the goal of increasing adoption to 90 percent within the main iron and steel manufacturers—40 percent of producers overall—by 2013. This program, with financial support from the government has reached an adoption rate of over 80 percent of the primary iron and steel manufacturers, amounting to about 23 percent of China’s coke producers. The remaining 77 percent of producers are relatively diffuse and less able to afford CDQ technology, making further dissemination of CDQ more difficult.

Price is the biggest constraint for these smaller producers, as installation and maintenance cost, on average, 109.5 USD per ton of coke. Despite this high cost, it provides a large amount of savings in terms of energy and CO2 reductions–approximately 0.55 GJ of electricity per ton of coke can be recovered in the form of steam for electricity generation, resulting in a reduction of CO2 emissions. This process has the potential to reduce energy costs and produces higher quality coke.

The centralized and authoritarian nature of the Chinese government makes CDQ a question of political commitment. Previously the government had implemented a number of policies to deal with overcapacity in the coke industry, including policies that limit financing available from banks. Beijing has recently produced a new plan of action for approaching overcapacity, this time from the perspective of environmental protection. The new plan uses market mechanisms combined with strict environmental and energy standards for industry, including closure targets for producers using outdated technology. The plan will work in tandem with the national pollution action plan 2013-2017, which also stresses energy efficiency and environmental protection in industry. In addition to these new plans, the Chinese government recently implemented the World Health Organization’s Interim Target-1 standards for particulate matter, with the goal of reaching an annual average of 35 ug/m3 by the end of 2015. The plan makes it easier for firms to leave overcapacity industries, so the plan may induce struggling smaller coke producers to throw in the towel. In addition, the strong policy emphasis on industry and environment indicates that government funding is likely a viable option for funding CDQ adoption amongst smaller producers.