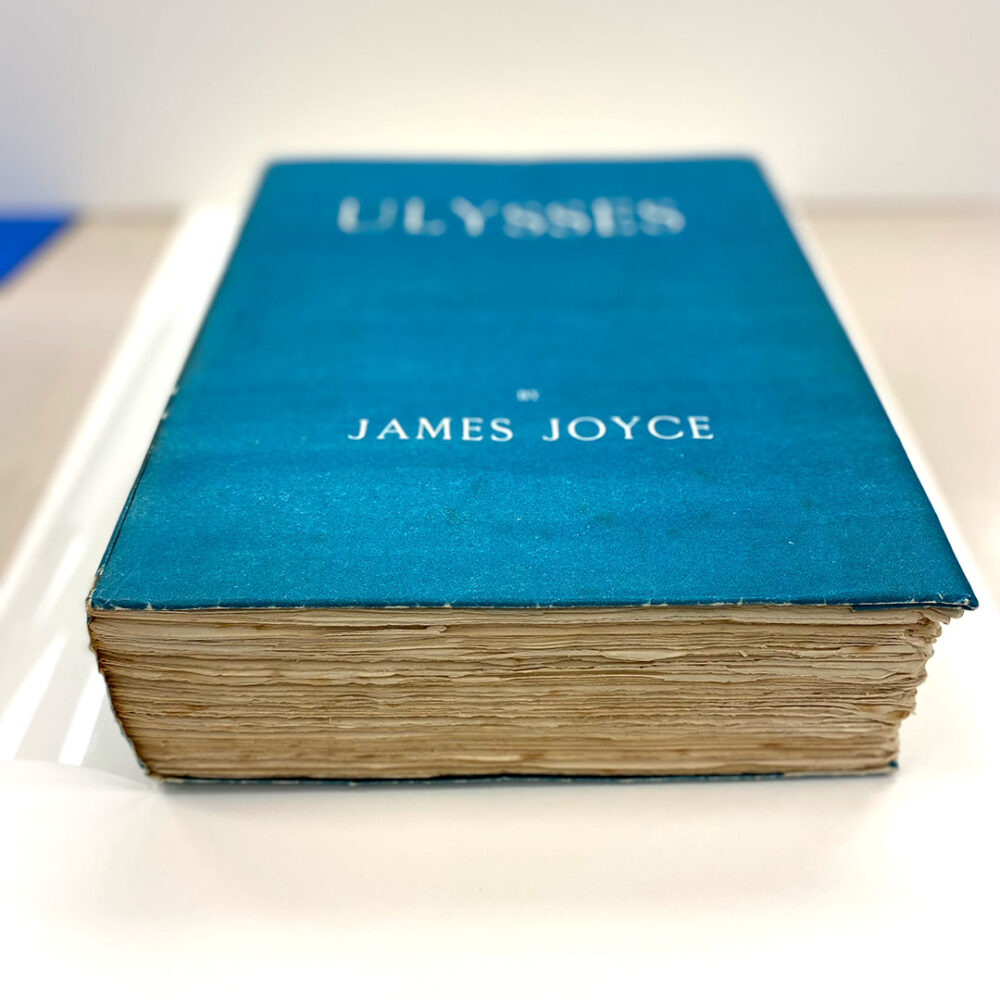 This is the first article in a series devoted to objects that tell the story of women who supported author James Joyce and the publication of his landmark novel, Ulysses (1922). Learn more in the exhibition, Women and the Making of Joyce’s Ulysses, curated by Dr. Clare Hutton and on view through July 17, 2022. Subscribe to eNews to receive all the articles in this series.

James Joyce’s Ulysses, published in Paris by Sylvia Beach on February 2, 1922, the occasion of Joyce’s 40th birthday, would have been a very different book had she not been so generous in her support. He had first considered writing a work called Ulysses in 1906, but struggled to make significant progress during the years of upheaval brought about by World War I, health problems, and financial difficulties. When the serialization of Ulysses in New York ground to a halt owing to legal proceedings against The Little Review during the autumn of 1920, Joyce told Beach that his “work will never come out now.” He had met her at a party a few days after his arrival in Paris in July that year. Joyce had quickly become a regular visitor to Shakespeare and Company, Beach’s English language lending library and bookshop, which functioned as a kind of salon and meeting place for writers and artists, conveniently positioned opposite “La Maison des Amis des Livres,” the bookshop owned by Beach’s lover, Adrienne Monnier.

Beach was determined to make Ulysses a success, partly because of the difficulties Joyce had faced in the attempt to produce the work elsewhere. The prospectus, offered to potential purchasers of the first edition, points out that Ulysses was “suppressed four times during serial publication.” It promises subscribers the text “complete as written,” a tiny and telling phrase which shows that Beach would not allow Joyce to be censored. In this she differed from others who championed Ulysses, including American poet Ezra Pound, who had quietly omitted words like “pissed,” “bugger,” “venereal,” and “cunt” from the typescripts of Ulysses he was handling for The Little Review.

Maurice Darantiere, the master printer whom Beach commissioned to print Ulysses was instructed “to supply Joyce with all the proofs he wanted” and quickly found that Joyce was “insatiable.” As the text began to find its way into proof, Joyce began revising and expanding, and Beach found herself having to put “every single centime aside” in order to meet Darantiere’s significant printing bills.

Beach allowed Joyce to play a significant role in designing the look and feel of this iconic first edition. He chose the typeface, Elzevir, and specified the color of the paper cover: the turquoise blue of the Greek flag is intended as a subtle reminder of the book’s Homeric substructure. Beach also arranged for the sale of the first edition, which appeared in three different states. All copies were numbered: the first 100 were signed by Joyce and printed on Dutch handmade paper; 101 to 250, in a slightly larger format, were printed on a heavy handmade laid paper from Arches in France; copies 251 to 1,000, were also printed on a handmade paper, lighter and slightly thinner than Arches.

Copies of the first edition are regarded as a must have for collectors of modern literature. Signed copies are especially prized. Number 17 was formerly owned by Sylvia Beach and Maurice Saillet (1914–1990) who had been employed by Monnier.  This copy is in a pristine state and was subsequently acquired by Carlton Lake (1915–2006), a curator at the Ransom Center from 1968 to 2003.