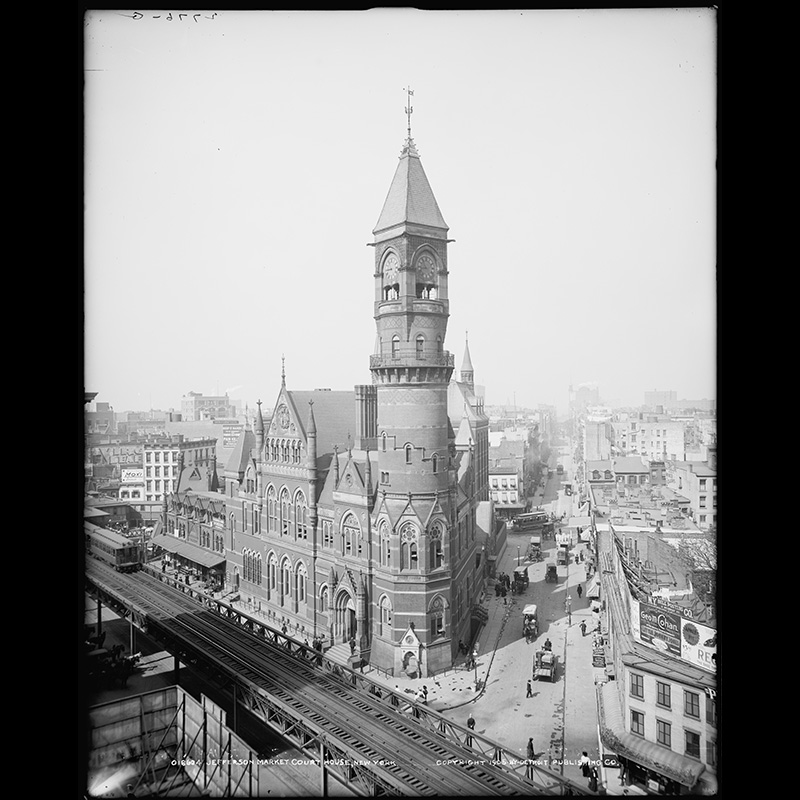 This is the eighth article in a series devoted to objects that tell the story of women who supported author James Joyce and the publication of his landmark novel, Ulysses (1922). Learn more in the exhibition, Women and the Making of Joyce’s Ulysses, curated by Dr. Clare Hutton and on view through July 17, 2022. Subscribe to eNews to receive all the articles in this series.

What was it like to be put on trial for the “crime” of publishing an instalment of Ulysses serially in The Little Review? It is difficult to get a detailed sense of this as a lived experience, or to know how to express that experience in visual terms. No transcript was made of the trial proceedings, and there was no written decision handed down. But this photograph of the Jefferson Market Police Court in New York’s Greenwich Village communicates something of the world in which Anderson and Heap found themselves moving when the case came to trial before three magistrates at the Court of Special Sessions in February 1921.

The imposing building, now a branch of the New York Public Library, was one of several local courts at the time, and was not especially familiar to John Quinn, the lawyer representing Margaret Anderson and Jane Heap, who more ordinarily represented commercial clients in higher courts. The building, a commanding example of High Victorian Gothic, included multiple holding cells, a women’s prison, and various courtrooms, and must have been an intimidating place to be. Writing to Ezra Pound, John Quinn described “police officers in blue uniforms with glaring stars and buttons, women and men by twos and threes awaiting arraignment or sentence. . . chauffeurs awaiting hearing; pimps, prostitutes, hangers-on and reporters.”

Placed in this scene, Anderson and Heap were clearly fearless, and brought many supporters and friends to witness proceedings. What they do not appear to have fully reckoned with is that John Quinn, the lawyer acting in their defense, did not believe that the case was winnable, and was inadequately prepared. Nor did they realize that Quinn had become extremely hostile towards them, partly because of the risks taken by The Little Review but, more significantly, because they were gay. An unpublished letter from Quinn to Pound refers to Anderson and Heap as “two pissing rabbits. . . doing the lesbian business.” All the qualities which one might seek in a lawyer—someone who is calm, unemotional and in control of the fact—seem to have been lacking in Quinn. His homophobia is particularly shocking.

The judgement that the last instalment of chapter 13 of Ulysses was obscene had far reaching repercussions for Anderson and Heap personally. Anderson floundered. Her memoir of the period recalls not knowing “what to do about my life—so I did a nervous breakdown that lasted several months.” Heap, by contrast, was animated by the criminal record which now stood against her. She reorganized The Little Review as a journal of “protest” and continued as editor until a final issue of 1929.

For Joyce, and for the text of Ulysses, the ruling was also extremely significant. Ulysses had been deemed obscene even before it was finished, and Joyce set about rewriting it in response to the legal judgement. In revising for publication in volume form by Shakespeare and Company, he frequently took the opportunity to up the ante. Details which had been deemed too candid and too explicit for the New York legal system in 1921 now became more candid and more explicit in revision.

The significance of the Little Review Ulysses trial of 1921 is not widely known or appreciated. For example, the trial of 1921 is often confused with the later and more well-known U.S. trial of Ulysses in 1933 (“United States v One Book Called Ulysses”). Another confusion which often arises is the question of who or what was on trial. Was it James Joyce, the editors of The Little Review or the specific content of the third instalment of ‘Nausicaa,’ as published in the July–August 1920 issue?

On this it is possible to be completely clear: it was Anderson and Heap, as editors of The Little Review, who stood trial, but the evidence on which the magistrates had to base a decision was that of Joyce’s text. The trial turned on close reading, on what exactly Leopold Bloom was up to on Sandymount Strand, and “whether the tendency of the matter charged as obscenity is to deprave and corrupt those whose minds are open to such immoral influences.” The odds were stacked against Anderson and Heap. Quinn’s legal practice was ordinarily commercial and his defense was inadequately prepared. Clearly he was the wrong lawyer for the task. Once the magistrates read the infamous fireworks scene, they decided the pair were guilty as charged, took their fingerprints, fined them $50 each, and ordered them to stop publishing Ulysses in The Little Review.