BLACK CARBON AND THE ARCTIC

The Arctic is warming at twice the rate of the rest of the world, an alarming fact that has the potential to accelerate sea-level rise, disrupt Arctic ecosystems, and upset ocean circulation patterns. The culprit behind the escalated warming is the albedo effect: less ice means less reflected radiation, and less reflected radiation means more warming and more melting. Much of this effect is linked to black carbon, which not only absorbs radiation being reflected by the ice (and so increases ambient air temperatures) but also settles on the ice causing the ice itself to absorb more radiation. Black carbon emitted in the Arctic and subarctic regions, therefore, has a higher impact as a climate forcer than black carbon emitted at lower latitudes. 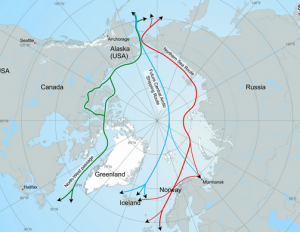 As the polar ice retreats arctic shipping will become faster and cheaper.

A recent study estimated that technologies such as scrubbers, diesel particulate filters, liquified natural gas, and low-sulfur fuel could result in a 70 percent reduction in black carbon emissions in 2030, cutting the greenhouse effect in the Arctic by 50 percent. Whether such action is realistic, however, is another question. Despite the relatively low cost of these technologies and widespread acknowledgment that black carbon and other particulate matter are particularly damaging to Arctic warming, no international restrictions or emissions standards have been put into effect.

Currently, melting is outpacing action on introducing particulate matter emissions standards. The Arctic Council acknowledged the threat posed by black carbon in 2009. Since then there have been a number of reports detailing the importance of black carbon mitigation. However, as the International Maritime Organization (IMO) pursues revisions of the Polar Code, restrictions and regulations concerning black carbon and higher efficiency technologies remain conspicuously absent.  Their absence is because regulators currently lack standardized methods for measuring black carbon emissions, making emissions difficult to restrict. The Marine Environment Protection Committee, under the IMO, has delegated these considerations to the Subcommittee on Bulk Liquids and Gases, which is in the process of developing a technical definition for future black carbon measurement, identifying the best measurement methods, and possible mitigation technologies. Currently the Sub-committee is favoring measurements that focus on the actual radiation absorbing capacity of black carbon, to best capture the effect of emissions on warming.  Finding appropriate measures, however, is difficult. Measurement techniques must be applicable to the decided upon definition and be commercially available, appropriate for field use, and cost effective.

In January of 2013, the group of environmental NGOs, including the Clean Shipping Coalition (CSC), Friends of the Earth International (FOEI), World Wide Fund for Nature (WWF) and Pacific Environment, summited a request to the Sub-Committee on Ship Design for preliminary inclusion of black carbon in the Polar Code. The request, however, was denied; the IMO opted to wait for results from the BLG subcommittee before adding black carbon to the code.

THE POTENTIAL OF ECAs 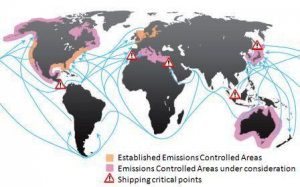 Despite being left out of the Polar Code, the implementation of Emissions Control Areas (ECAs) under the IMO’s MARPOL initiative could indirectly lead to black carbon mitigation. ECAs under Annex VI, which is aimed at reducing air pollution from ships, limit the amount of specific pollutants at ports within ECAs. Regulations usually focus on fuels use and accompanying technologies necessary depending on fuel type. For example, one of the largest ECA currently being implemented regulates sulfur emissions in the EU. These require that vessels use low sulfur fuels (distillates) or the use of scrubbers or exhaust gas cleaning systems in vessels using traditional high sulfur diesel. All of these approaches cause some level of black carbon mitigation.  The U.S. and Caribbean have included particulate matter in their ECA standards.

Both diesel particulate filters (DPF) and use of liquified natural gas (LNG) have the potential to reduce black carbon emissions by 99 percent. DPFs are more cost effective in the short-term, but the feasibility of LNG as a bunker fuel is increasing, especially if the number of ECAs continues to increase. Since the establishment of the SECAs* LNG ports have sprung up throughout the region. Unfortunately, LNG marine fueling terminals are still rare in other parts of the world. The reluctance to switch to LNG is a combination of things. First and foremost, it is because switching to LNG requires shippers to make large capital investments in LNG technologies without guaranteed future supply. On the flip side, natural gas suppliers are reluctant to invest in bunkering infrastructure without longterm purchase contracts with shipping companies. More ships have begun to use LNG as bunker fuel since the implementation of the European SECA; it’s not unreasonable to conclude that more ECAs could push the shipping industry toward LNG. 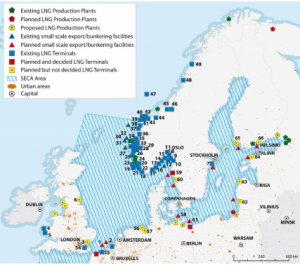 Black carbon in the Arctic poses a major threat to mitigation efforts throughout the world. Its role in Arctic melting is undeniable and, therefore, represents a threat to low-lying regions all over the globe. The shipping industry, as a major contributor to emissions in this key area, must do more, and fast. Despite slow action on specifically mitigating black carbon, black carbon emissions may be on the down-swing. Increasing environmental standards in the EU and North America are pushing fuel switching and retrofit adoption, both of which significantly reduce black carbon emissions. For this trend to continue, however, it is necessary that more countries adopt ECAs, especially those at northern latitudes. Absent these changes, we’ll likely see massive increases in Arctic shipping, accompanied by faster warming and melting rates throughout the Arctic.