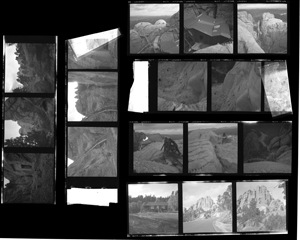 Alfred Hitchcock directed a string of masterpieces in the 1950s including Strangers on a Train (1951), Rear Window (1954), The Man Who Knew Too Much (1956), Vertigo (1958), and Psycho (1960). At the height of this remarkable run came North by Northwest (1959), a unique marriage of Hitchcock’s trademark suspense and humor. Ernest Lehman, well known in Hollywood for adaptations such as Sabrina (1954) and The King and I (1956), wrote the screenplay, his only original work and which is widely regarded as his best.

View a slideshow of Lehman’s photographs of Mount Rushmore from his research trip. The photographs were developed from previously unstudied negatives found in the Lehman collection.

This is just one film scene highlighted in the Making Movies exhibition at the Ransom Center. Follow our RSS and Twitter feeds or become a fan on Facebook to see new items from the exhibition revealed each day for the next few weeks as part of “Script to Screen.”

For Central Texas readers, join us on the red carpet for a special opening celebration for the Making Movies exhibition tomorrow night. Details at www.hrc.utexas.edu/redcarpet.