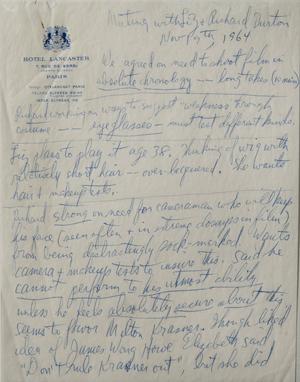 The Making Movies Film Series runs throughout the summer and features films that are highlighted in the Making Movies exhibition. Tonight, the Ransom Center will screen Mike Nichols’s Who’s Afraid of Virginia Woolf? (1966), starring Elizabeth Taylor and Richard Burton. Throughout the series, Cultural Compass will highlight an exhibition item related to each film.

Edward Albee’s play Who’s Afraid of Virginia Woolf? opened on Broadway in 1962 and gained notoriety for its profanity and sexual themes. It was selected for the 1963 Pulitzer Prize for Drama, but the trustees of Columbia University overruled the advisory committee and awarded no prize for drama that year. Despite the controversy, Warner Brothers acquired the film rights to the play in 1964 and recruited Hollywood’s top screenwriter, Ernest Lehman, to write and produce the movie.

The usual procedure for adapting a play is to “open it up,” adding characters and locations to make the film more visually appealing. Lehman worked his way through several drafts of the script but eventually returned to the original play, making only a few minor changes. He was able to cast, against type, “the world’s most famous couple,” Elizabeth Taylor and Richard Burton, and he hired Mike Nichols for his first film directing job.

In spite of the scrutiny surrounding the film, Who’s Afraid of Virginia Woolf? became one of the highest grossing films of 1966 and earned every eligible Academy Award nomination. Yet the film’s impact reached far beyond its artistic and financial success. Despite fierce opposition, Lehman and Nichols prevailed in their fight to keep the original language of the play intact. The movie was directly responsible for the Motion Picture Association of America abandoning the old system of self-censorship and adopting the film rating system that is still in use today.

Shown here are Ernest Lehman’s notes about his meeting with Elizabeth Taylor and Richard Burton on November 19, 1964, to discuss their roles in the film.