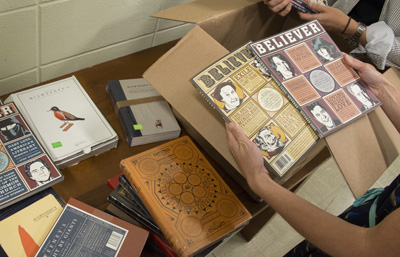 When a new archive arrives at the Ransom Center, it is quickly whisked away to a designated quarantine area in our basement. The first order of business is for staff to inspect the collection carefully—under the diligent leadership of one of our conservators—for signs of bugs or mold, or any other damage that could jeopardize our collections. These inspections are serious affairs, for it’s critical that we not introduce pests or mold into our stacks. But they’re also exciting. They are our first opportunity to dig into a new collection, and they’re often filled with unexpected discoveries.

The McSweeney’s archive arrived at the Ransom Center in excellent condition, and sorting through the contents of nearly 60 bankers-sized boxes elicited curiosity and delight among our staff. I wasn’t entirely surprised by the rich material that filled the boxes. I had my first glimpse of the archive in September 2007 in the crowded basement of the publishing house’s headquarters in the Mission District of San Francisco. The Ransom Center had first inquired about the McSweeney’s archive in late 2006. Several conversations followed, but the publishing house wasn’t ready to part with its files at the time. I had been an enthusiastic fan of the publishing house for years. I believed then, and still do, that McSweeney’s—with its taste for experimental and new talents, its innovative approach to design, and its willingness to take risks with each volume—brought a new vision to publishing and introduced something different and significant to twenty-first-century literature. The publications coming out of McSweeney’s are unlike anything you’ll find elsewhere. We were thrilled to hear from the publishers at McSweeney’s years later, when their files had grown to overtake their basement, and they wanted to find their archive a home where it would be cataloged, preserved, and made available for study.

The archive is filled with manuscript submissions, letters from authors, illuminating editorial notes, and design renderings that trace the 15-year history of this publishing house. These materials will ignite the interest of students and scholars who will study this archive in the years to come. Equally fascinating are the published volumes themselves. Each book, each issue of the Quarterly and The Believer is utterly unique. Taking them out of boxes, one by one, and seeing them all together, one is immediately struck by the legacy McSweeney’s has already left on the world of publishing.

I can’t wait to see what they come up with next.