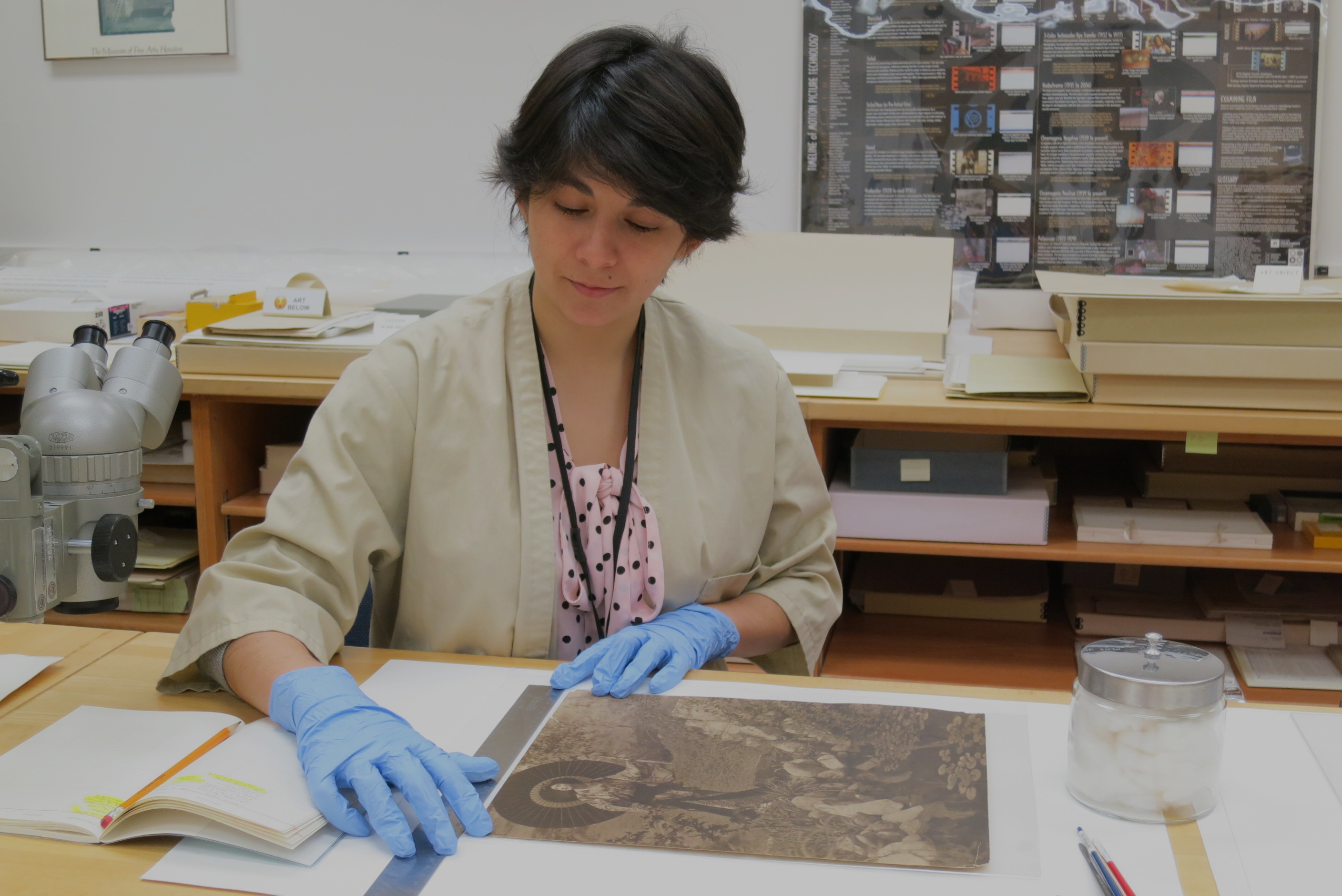 Meet the Staff is a Q&A series on Cultural Compass that highlights the work, experience, and lives of staff at the Harry Ransom Center. Diana has a Bachelor of Arts in Conservation from Bogotá, Colombia and she specialized in Photograph conservation in Mexico City, Mexico. She has worked in private workshops and labs and came to the Ransom Center following her work at the Frida Kahlo Museum and the National School for Conservation (ENCRyM) both in Mexico City.

I like the fact that we can actually touch the objects and handle them carefully but with confidence. Usually when you go to a museum, you are not allowed to touch anything, you are only allowed to see and be very careful. In conservation, while performing a treatment, it is usually necessary to handle the objects to take care of them. This allow us to better understand the materiality of the object.

What is your favorite item that has come through your office?

I was very lucky when I first arrived because the “First Photograph” was coming back from an exhibition in Germany. The case needed some maintenance after the exhibition, so it was brought to us at the Photograph Conservation Lab, and I had the chance to view the photograph outside of its case and look at it closely to check its condition. It was amazing.

What was your most challenging project?

In Mexico City, I worked on a huge collage with photographs from the end of the nineteenth century. It was a commemoration of Mexico’s independence, with portraits of independence heroes as well as politicians and diplomats of the time. It measures approximately 8 x 10 feet and has more than 700 photographs. It had several structural problems that needed attention and became very complicated due to the size and the mixture of materials in the collage, and it was a lot of work to treat each photograph, one by one. Here at the Ransom Center, I worked on very tightly rolled panoramas that needed to be flattened for the World War I exhibition. The work was delicate and complicated, especially because the paper was brittle and had some tears that needed mending.

What is the most useful tool in your profession?

For everyday use, the microscope and the spatula are the most helpful tools for identification and treatment of photographs. Equipment used to perform scientific analysis is also very useful and helps us to better understand the chemical composition of the objects and works of art we work with. It is very important for us to first identify the photographic technique of every print or negative that comes to the lab before performing any treatment, as this determines how fragile a photograph might be. For example, some photographs are more sensitive to light, while others are more sensitive to handling. Identifying photographic techniques also allows us to choose appropriate conservation treatments.

Does your Spanish proficiency aid you in your work?

Sometimes, especially because of Texas’s strong connection with Latin American culture. Many archives are from native Spanish speakers, and others have Spanish inscriptions. My language skills help me understand some details about the objects, and are sometimes helpful when interacting with patrons interested in the Ransom Center’s collections.

What drew you to photo conservation?

My father, who was a photographer and filmmaker, first influenced me. I used to see him filming and taking pictures, and then I played with his cameras. When I started in conservation, I liked working with paper, so my first job was as a paper conservator in an archive where photographs started to be more and more common. I was asked to survey a new collection that had an important number of photographic materials, and at that moment I realized I did not really know how to talk about the materiality of photographs or their decay with time. I realized that I didn’t know much, but I wanted to. That curiosity and my father’s influence were what helped me decide to work in this field.

You worked in the Frida Kahlo Museum in Mexico City. What did you like most about working there?

It was great to learn about her as an artist, but also as a person by seeing her pictures. Her father was a renowned photographer, so there is a large collection of family photographs, together with images of her in bed after one of several operations, with an apparatus installed in the bed that held a canvas and allowed her to paint while recovering. Others show the work in progress of some of her most important paintings. There are also photographs with or from other artists and friends of Frida such as Nickolas Muray and Diego Rivera. These pictures show an intimate part of her life that nobody had seen before and have an incredible value for researchers and scholars.

When Frida died, Diego locked up her personal effects and other belongings, including unfinished paintings, in bathrooms at the Blue House that had been converted into storerooms. Diego entrusted the archive to his friend Dolores Olmedo, with the instruction to keep it locked until 15 years after his death, but Dolores decided to keep it locked until after her own death. So 50 years passed before the storage rooms were opened and the museum was able to process Frida’s personal archive and establish conservation needs and exhibitions. I feel very fortunate to have contributed to the preservation of her archive.

There’s a Frida Kahlo portrait at the Ransom Center.

It’s remarkable that we have it here. The painting is one of her most important pieces. Actually, I had the chance to courier it back to the Ransom Center. It was featured in an exhibition that highlighted surreal artists, and I had the chance to return it to the museum when the exhibition ended. I think it’s another favorite from the collections for me.

What do you like to do outside of work?

I like to read and dance a lot, go to the gym and exercise, go out with friends, and go to the movies.

What type of dancing do you do?

Everything! If it is informal, I like to salsa and merengue or dance to other Latin music, but I used to do contemporary dance and ballet.

What was the last movie you saw?

I saw Wish I Was Here with Zach Braff.

What is your favorite place in Austin to spend your day off?

I like so many places in Austin: around the lake, downtown. Areas surroundings Austin, like Enchanted Rock, are beautiful, and Barton Springs, of course, in the summer.

Do you have a favorite contemporary photographer or a favorite gallery in Austin?

I like very much the work of the photographer Alec Soth. The Ransom Center organized a pop-up show recently; I especially like his “Paris/Minesota” project. On the subject of galleries, I like The Contemporary Austin.