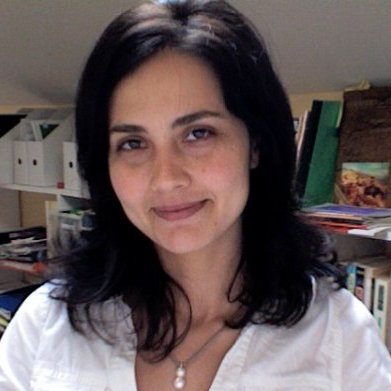 Lina del Castillo is Assistant Professor at the Teresa Lozano Long Institute of Latin American Students as well as in the Department of History at The University of Texas at Austin. She will moderateFriday’s, October 30, “The Political Worlds of Gabriel Garcia Marquez” panel at the Gabriel García Márquez: His Life and Legacy symposium.

Her current researches explores the intersectionality of cartography, contested claims to land and resources, and the formation of the Colombian nation-state during the first half of the nineteenth-century. Her research interests include various branches of Latin American History, including the formation of eighteenth-century Colombia, medicine, technology, gender, race, class, and relations with the United States.

Del Castillo has contributed chapters to Mapping the Transition from Colony to Nation (17th Kenneth Nebenzahl, Jr. Lectures in the History of Cartography, The Newberry Library), Mapping Latin America: Space and Society, 1492-2000, Iberia and the Americas: Culture, Politics, and History, and Humboldt y otros viajeros en América Latina. Her articles have been published in Araucaria: Revista Iberoamericana de Filosofía, Política y Humanidades, Historia Crítica, and Terrae Incognitae: The Journal of the Society for the History of Discoveries.

García Márquez was involved in the negotiations between the Colombian government and guerrillas. Do you have insight on how this developed?

The ‘secret missions’ of Gabriel García Márquez are themselves novel worthy. Following the triumph of the Cuban Revolution, Gabo extensively covered the rise of Fidel Castro. Castro fascinated him, not just because of the political revolution he launched, but also because of Castro’s passion for literature. The two men forged a deep and lasting friendship. Beginning in the 1980s, Gabo believed his ties to Castro would facilitate peace between Colombian guerrillas and the Colombian government. He was right.

By the 1980s, Gabo had also befriended Colombian president, and accomplished poet, Belisario Betancur. After Betancur was inaugurated on August 7, 1982, the M-19 proposed dialogue. With a number of active members estimated between 1,500 and 2,000, M-19 was the second largest guerrilla group in Colombia after the Revolutionary Armed Forces of Colombia (FARC). Gabo knew that M-19’s leadership had close ties to the Cuban regime. After President Betancur created a peace commission in September 1982, Gabo facilitated a secret meeting between members of the peace commission and members of the M-19 in Cuba.

Uncertainty and bloodshed followed, but by March 8, 1990, the M-19 finally laid down its arms. Betancur later remarked how peace had a great debt to Gabriel García Márquez. In recognition of his earlier efforts, Gabo was guest of honor during the inauguration of the demilitarized zone in San Vicente del Caguán on January 7, 1999, where President Andrés Pastrana’s administration sought peace with the FARC. Gabo’s mediation, together with Pastrana’s disposition toward dialogue, also brought the National Liberation Army (Ejército de Liberación Nacional, or ELN) to the negotiation table. García Márquez and his wife, Mercedes Barcha, witnessed the formal installation of peace talks with the ELN in Havana in January 2002. Unfortunately, neither effort resulted in a concrete peace agreement with either guerrilla group.

Gabo lived long enough to encourage a new round of peace talks in November 2012. That these talks have been held in Havana may, in part, be attributed to Gabo’s behind-the-scenes ability to win the hearts and minds of powerful political figures over the course of generations.

Although I have lived in the United States since the age of 5, and have received the bulk of my education here, I nevertheless was continually drawn to stories about my native Colombia. And Gabriel García Márquez told the best ones. Perhaps this is because he told them after having been separated so long from his country of birth. This longing is something I identify with.

I have always been interested in learning more about Gabo, his life, and his writings. This symposium offers a unique opportunity to do so. I am also star-struck by the line-up. Salman Rushdie and Elena Poniatowska will deliver the keynote addresses. But there will also be dozens of speakers who will reflect upon the ways Gabo touched their lives, directly or indirectly. People who were moved and inspired by his writings will discuss how Gabo helped them to find their own voice. Scholars and researchers who have dedicated their lives to studying his work will offer much-needed commentary on what they know, and what still remains to be understood. The symposium, in short, will point to the ways in which future researchers might enrich and enlighten not just our knowledge of Gabriel García Márquez, but also of the worlds he inhabited, changed, and created.

Can you share examples of Garcia Marquez’s interest in politics within his literary works?

Marquez’s fictionalized account of the devastation wrought by a U.S. banana company on the Colombian village of Macondo has haunted collective historical memory. There was, of course, a very real historic labor struggle in the banana-growing region of Colombia. By late 1928, this struggle culminated in the largest labor strike ever seen in the region. Over 25,000 banana workers were pitted against the United Fruit Company. The strike ended with a massacre of strikers by the Colombian army in the town of Ciénaga, near Santa Marta. García Márquez drew on his early memories of the event together with the stories his parents and grandparents told in order to recreate it.

“When José Arcadio Segundo came to he was lying face up in the darkness. …. Prepared to sleep for many hours, safe from the terror and the horror, he made himself comfortable on the side that pained him less, and only then did he discover that he was lying against dead people.”

García Márquez’s fictionalized account still remains the primary point of reference for the history of United Fruit in Colombia. Evocatively, in Macondo, torrents of rain washed away efforts to call attention to the massacre, and dissolved the hopes of those seeking to hold the perpetrators accountable. The annihilation of the strikers was thereby erased from memory. After all, argued the police officers responding to the complaints of the family members of the disappeared, Macondo was a happy place. Nothing happened in Macondo, nothing is happening in Macondo, and nothing will happen. In this way, Gabo explains how Macondo erased the event from memory. And yet, in large part because of García Márquez’s portrayal of this fictionalized event in Macondo, the memory of the 1920s massacre in Ciénaga looms large in Colombia. José Arcadio Segundo continues to ride in our minds the interminable midnight train carrying thousands upon thousands of dead bodies stacked upon one another like so many bunches of bananas to be tossed into the ocean. No journalistic account of the actual event could ever capture our imaginaries or our memories like García Márquez.