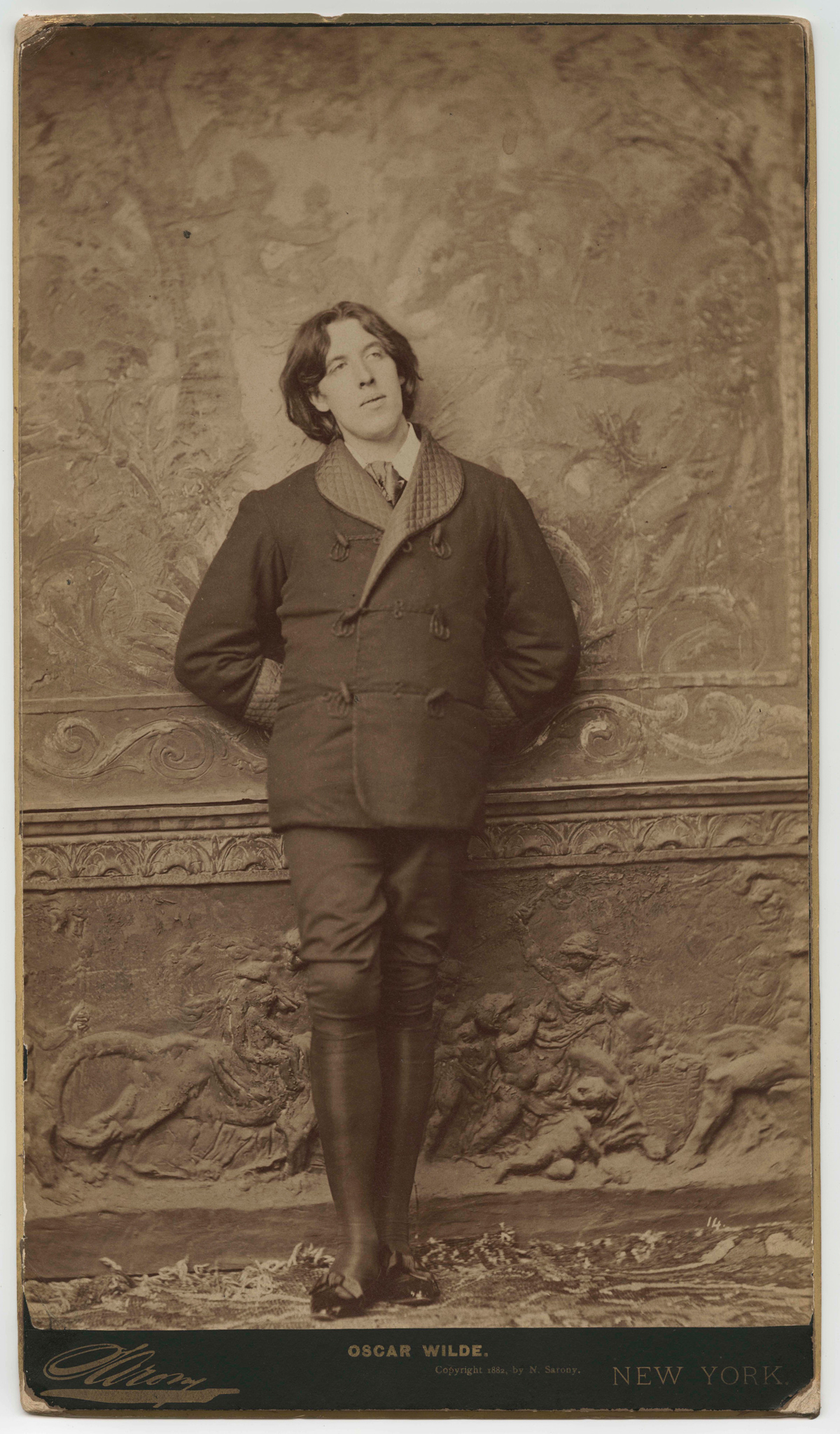 This post was written in collaboration with author and independent scholar Thomas Wright.

Oscar Wilde was many things: dramatist, dandy, essayist, lecturer, novelist, poet—and he was very much a bibliophile.

Wilde took a role in deciding the physical aspects of his published books, many of which were printed on fine paper, expertly designed, and issued in limited editions meant to please other bibliophiles.

Wilde also amassed an impressive collection of books, mentioned in De Profundis where Wilde described with affection his “collection of presentation volumes from almost every poet of my time, from Hugo to Whitman, from Swinburne to Mallarmé, from Morris to Verlaine;” his “beautifully bound editions of my father’s and mother’s works;” his many “éditions de luxe;” and his “wonderful array of college and school prizes.” But in that passage from De Profundis Wilde is in fact mourning the breaking up and dispersal of his library, a loss he suffered while sitting in prison awaiting trial for charges of “gross indecency.” His books were sold off in an anonymous auction in 1895; the destruction of his library was, he lamented, “of all my material losses the most distressing.” The only record we have of Wilde’s library is the incomplete and fragmentary catalog printed in the Tite Street Catalog (the sale catalog of the auction of Wilde’s household goods), of which only a few copies are known.

A Surprise in the Archive

Early this year I had the chance to catch up with Wilde scholar Thomas Wright. Tom is an Oxford based scholar and graduate of Magdalen College (Wilde’s college) who has produced a study of Wilde’s personal library—no small task considering that the forced auctioning of the books in 1895 scattered them around the world.

Tom’s research resulted in Oscar’s Books (issued in the U.S. as Built of Books: How Reading Defined the Life of Oscar Wilde), which describes surviving volumes from Wilde’s library and reveals a great deal about Wilde’s reading habits and his intellect—Wilde had the courtesy to frequently write in his books, both his own and those he presented to friends and fellow writers.

I recently discovered that the Harry Ransom Center holds seven titles from Wilde’s library, four of which were previously unknown to Tom. He provided me with the following notes on these seven books to share with the readers of this blog.

Wilde read and heavily annotated this book at Oxford, where it was a set text on his undergraduate course Literae Humaniores (Classics). He acquired it prior to his 1876 Honours Moderations exam in that subject. This book once belonged to the poet, critic, and novelist Richard Le Gallienne, whom Wilde befriended in 1888.

Wilde appears to have read this book during the final months of his time as an undergraduate at Trinity College Dublin, between the winter of 1873 and the summer of 1874 when he took the entrance exam for Oxford. Many of the high-brow magazine essays collected in this volume, by the English historian Edward Freeman, were relevant to Wilde’s studies as a Trinity Classics student at this time. On an endleaf of this book Wilde has written some notes relating to one of the essays. Wilde owned at least one other book by Freeman—A History of Architecture (London, 1849), which is listed in lot 48 of the Tite Street Catalog.

This title had obvious appeal to Wilde as an all-round man of the theater—playwright, dramatic critic, avid theatergoer, friend of countless actors; it also held a specific point of interest for Wilde. On pages 16 and 17 of the first volume Goddard quotes, at length, the theories of Gilbert, Wilde’s spokesman in the essay The True Function and Value in Criticism: With Some Remarks on the Importance of Doing Nothing: A Dialogue. Part II (1890) (republished in revised form in Intentions (London, 1891) as The Critic as Artist. A Dialogue. Part II).  Wilde often gave books from his own library away to friends and acquaintances. Was the man to whom he gave volume one really called Dorian? It seems more likely Wilde re-christened his friend after the eponymous hero of The Picture of Dorian Gray, which had been published in book form a few months earlier.

In his journalism Wilde praises Hawthorne’s novels. The fact that he also read Hawthorne’s notebooks attests to his deep interest in American literature and the breadth of his reading as a young man (he was 19 in December 1872). Wilde wrote the inscription during the winter vacation of his second year as a Classics student at Trinity College Dublin.

As Raffalovich sent his calling card inside this copy of Cyril and Lionel, it seems likely Wilde was given the book in the very early stages of their acquaintanceship. Wilde offered qualified praise of Raffalovich’s poetry in his review of Tuberose and Meadowsweet, the follow-up volume to Cyril and Lionel (“A Bevy of Poets,” Pall Mall Gazette, March 27, 1885).

Wilde gave this volume to the love of his life Bosie (Lord Alfred Douglas) on either their first or second meeting (their first meeting took place in Wilde’s Tite Street library). The inscription is virtually identical to the one Wilde wrote in the copy of the large paper edition of Dorian Gray he also gave to Bosie in July 1891 (the book is now in the William Andrews Clark Memorial Library at the University of California, Los Angeles).

Wilde wrote a letter to Tilton thanking him for this book gift and praising its contents. The volume contains a handwritten note by Wilde (shown above). It reads: “Theodore Tilton brought me to see the room where Poe wrote The Raven – on Friday, Nov. 10. an old wooden house over the Hudson – low rooms – fine chimney piece – very dull Corot day – clergyman with reminiscences of Poe – about chickens -”

The note is interesting as it attests to Wilde’s profound fascination with Poe—the “Lord of Romance” whom he regarded as the greatest American poet. It is also unique (as far as I am aware) among notes written in surviving books from Wilde’s library because of its personal character—Wilde is not reacting to the contents of a book here but recording an experience. While there is always the possibility he was jotting down notes for a newspaper article or lecture he planned to write, this note reads like a diary entry, and may well be the closest Wilde ever came to writing one—so far as we know Wilde never kept a diary, and indeed laughed at the earnestness and egotism of many who did.

From the Outside In: Napoleon Sarony’s Portrait of Oscar Wilde, 1882