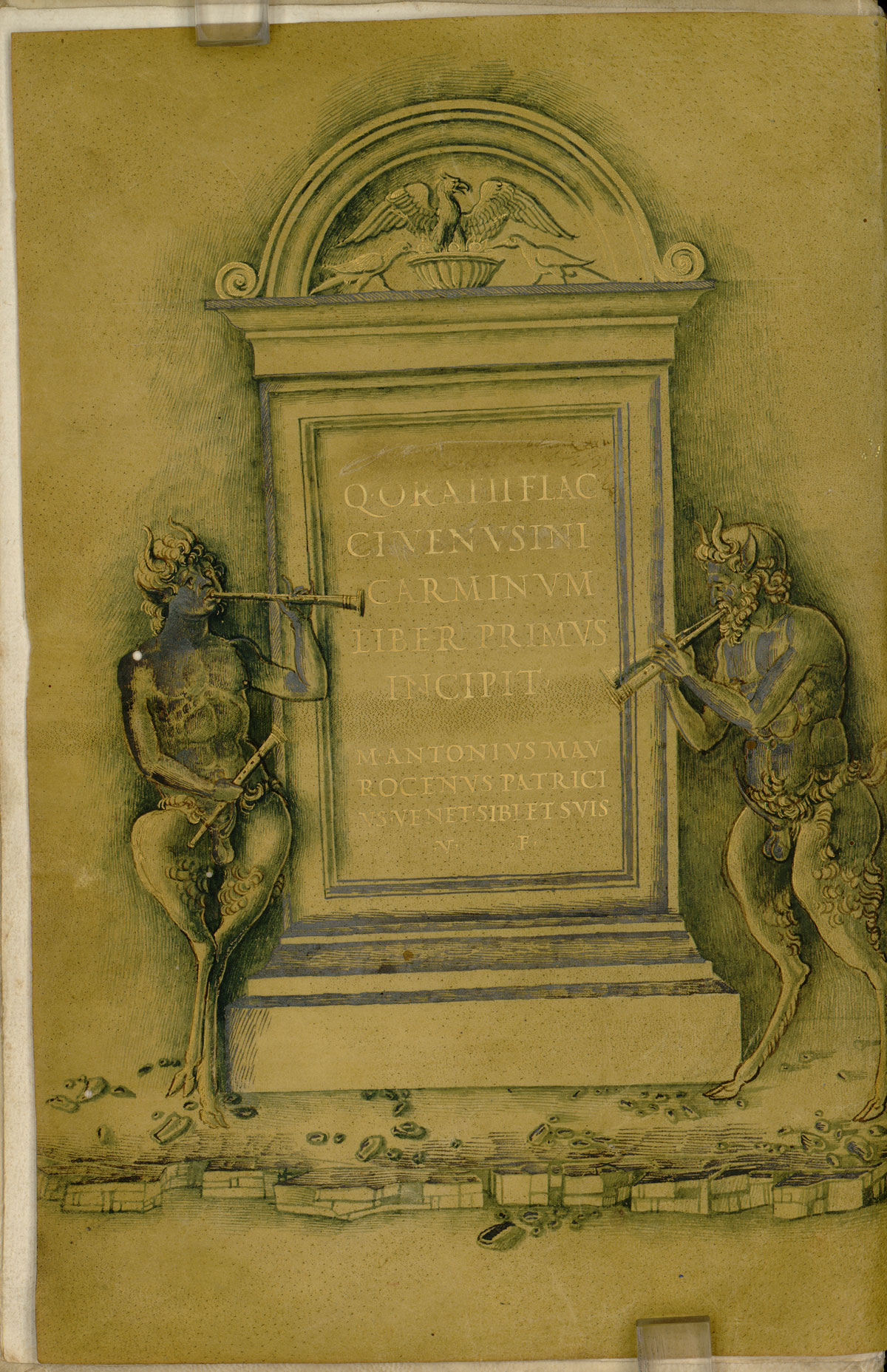 Classics-related holdings at the Ransom Center range from second century Ptolemaic Greek papyri fragments to medieval manuscripts, from early printed editions and translations to squeezes (paper impressions of classical inscriptions in stone). They are augmented by extensive printed materials, including the libraries of several classical scholars. The main strengths of the holdings are in the fields of classical philology, Greek and Latin literature, Greek and Roman history, and classical civilization. The Center is especially strong in translations of the classics.

Through the end of this month, materials from the collections are on view in the display case outside the Reading and Viewing Room on the second floor.

Made at the beginning of the Renaissance, at the request of Marco Antonio Morosini, an important Venetian book collector, this manuscript was copied by the scribe Bartolomeo Sanvito in Padua, who copied three other manuscripts for Morosini from 1460–65. This Italian collection of poems by the Roman poet Horace continues the medieval practice of helping readers locate information by using a hierarchy of differently sized letters. The large initial letter and the smaller multi-colored capitals indicate a major division in the text. Commentary on the text (called glosses) occupies the margins and the space between the lines.

View the work by Horace as well as a variety of other material, including :

Squeeze and accompanying photograph of a fifth-century BCE stone fragment from the City Eleusinion on the north slope of the Acropolis in Athens.

This squeeze belongs to a fragment that is part of an inscription concerning the regulations surrounding the Eleusinian Mysteries, celebrated in honor of the “Two Goddesses,” Demeter, the goddess of grain, and her daughter Persephone. This squeeze was a tool utilized by Dr. Benjamin Meritt to decipher the badly fragmented inscription, portions of which are stored at the British Museum. The collection, created by epigrapher and philologist Benjamin Dean Meritt (1899–1989) and classical archaeologist Lucy Shoe Meritt (1906–2003), comprises 1,043 squeezes and 14 boxes of photographs.

Aldus Manutius (1449–1515) was a humanist scholar and teacher before turning towards printing. He was dedicated to printing Ancient Greek works in their original language, and worked with several humanist scholars, such as Desiderius Erasmus, to correct errors that had been copied into the manuscripts, as well as printing them in small portable volumes for students.

This is fifth volume, and the last of the set, of the first edition of Aristotle’s works issued by the Aldine Press. It contains notes written in Greek in at least two different hands.

This manuscript volume of cosmological texts, including Aristotle’s treatise On the Heavens was copied in 1626 by Antonius Verherent, a university student.

This compendium of pre-Socratic philosophers was printed by Henri Estienne (ca. 1528–1598) who, along with Aldus Manutius in Venice, was one of the great classical scholars of the period, as well as a skilled printer himself. Estienne, also known as Henricus Stephanus, was the eldest son of the French printer Robert Estienne (1503–1559). As a youth, Henri apprenticed with Manutius in Venice, and travelled Italy collecting manuscript texts for his own family’s printing house.

Professor Gregory Vlastos’s teaching notes on Aristotelian Logic and his well-used copy of The Collected Dialogues of Plato, Including the Letters, edited by Edith Hamilton and Huntington Cairns (New York: Pantheon Books, 1961) from his personal library of 312 volumes housed in the Ransom Center.

E. E. Cummings’s decorated notebook containing his translation of Julius Caesar’s The Gallic Wars, and two of his exam prompts from Harvard University, 1914–1915.