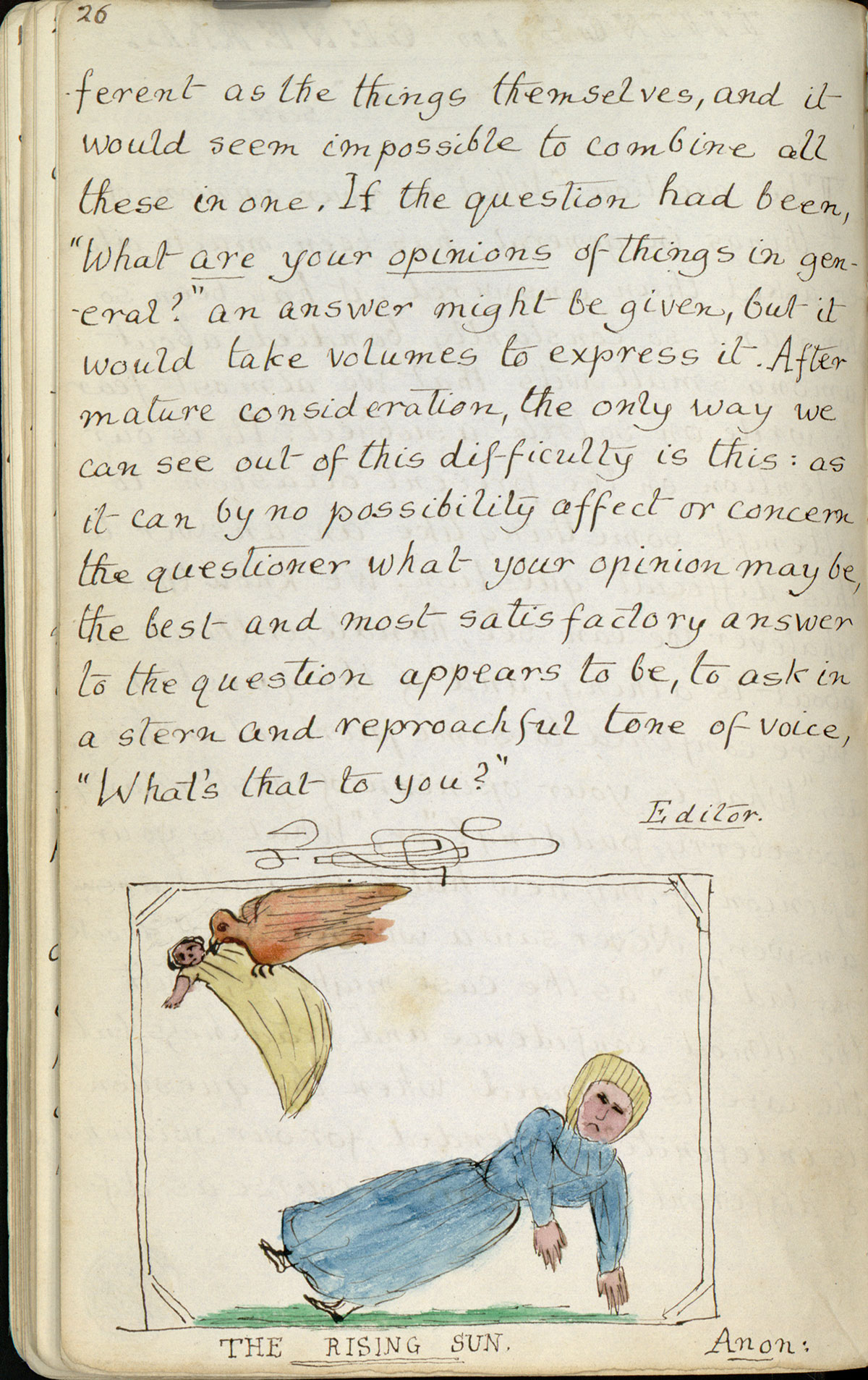 Dodgson, of course, became best known to the world as Lewis Carroll, the author of Alice’s Adventures in Wonderland (1865).

In 1850, when Dodgson was 17 or 18, he and his siblings completed their work on The Rectory Magazine. The magazine, named for the Dodgson family home, is “a compendium of the best tales, poems, essays, pictures &c that the united talents of the Rectory inhabitants can produce.”

Charles Dodgson edited the magazine and produced the majority of the content. The magazine also includes work by six of his ten siblings and an advertisement for a “maid of all work” from a contributor identified as “L.L.” The magazine includes a key to the contributors with their “assumed initials,” a table of contents, and an index. In his opening editorial statement, “Reasonings on Rubbish,” Dodgson offers a tongue-in-cheek introduction—imagining a day when “the Rectory Magazine shall draw from admiring thousands their unanimous and uncalled for plaudits” and “when infants shall lisp their first spelling lessons out of ‘Reasonings on Rubbish’!”

In compiling the magazine, Dodgson and his siblings followed the conventions of the nineteenth-century periodical press. His “Answers to Correspondents,” which appears eight times throughout the magazine, mimics a common feature of magazines and newspapers of the day in which editors would print answers to questions from readers without including the questions themselves. The result was a string of non-sequiturs. Dodgson’s “Answers” take the at-times absurdity of these features to new heights. (Fifteen years later, Mark Twain would also find the format conducive to satire, publishing six columns of his own “Answers to Correspondents.”) 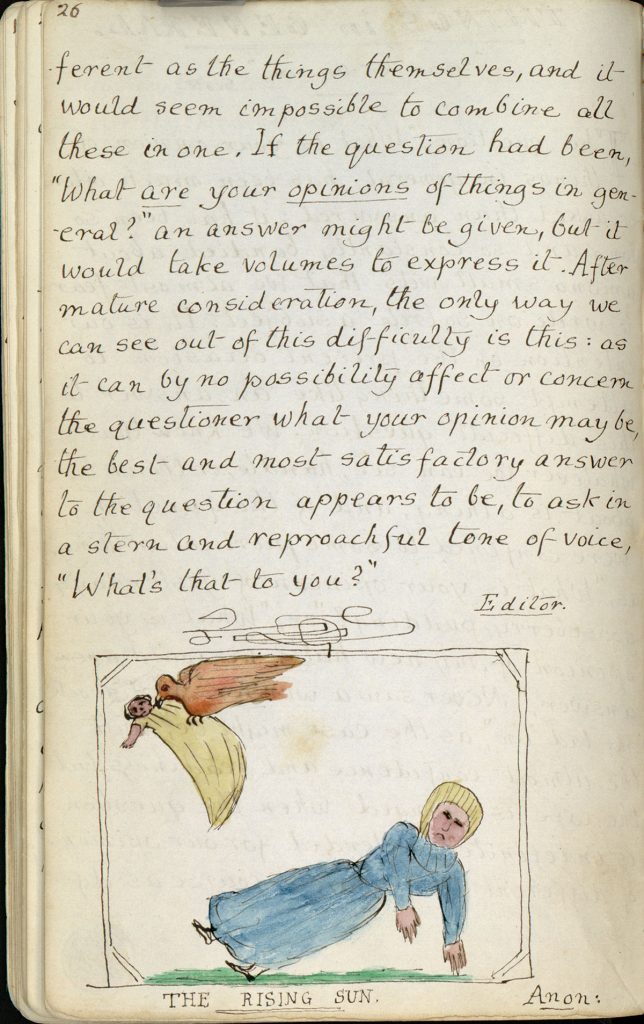 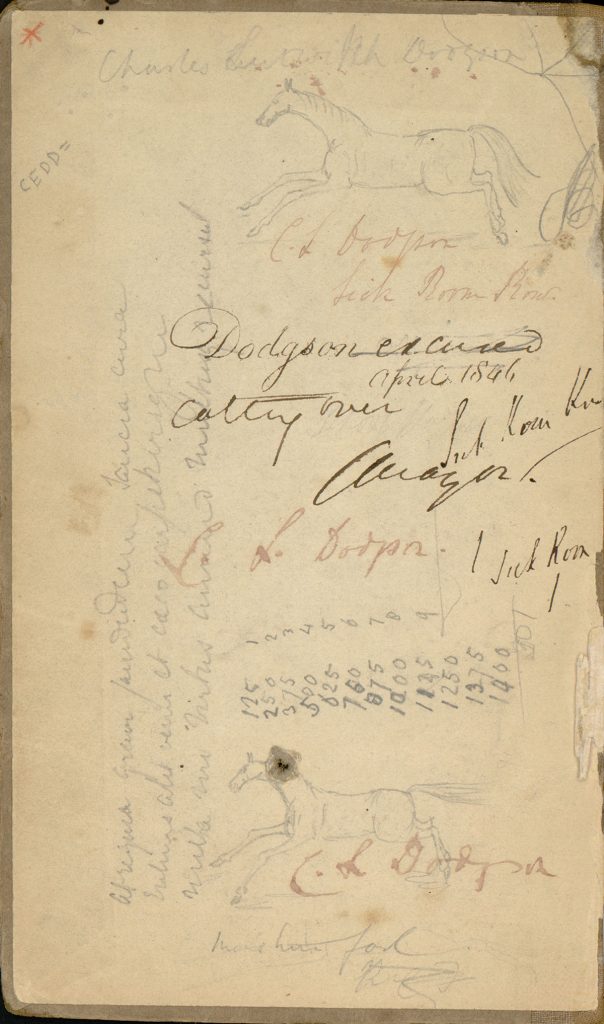 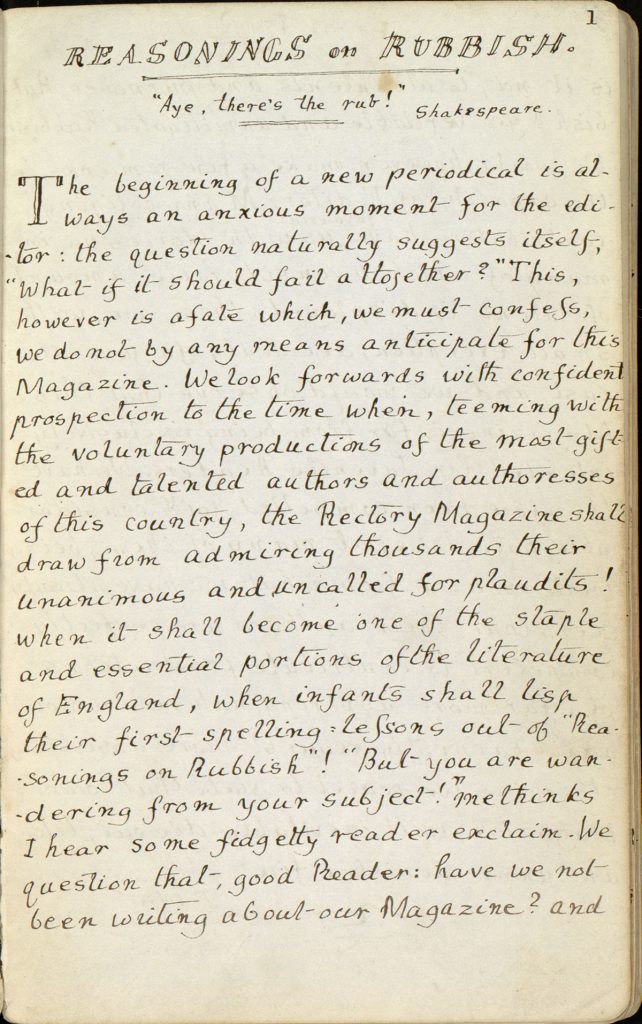 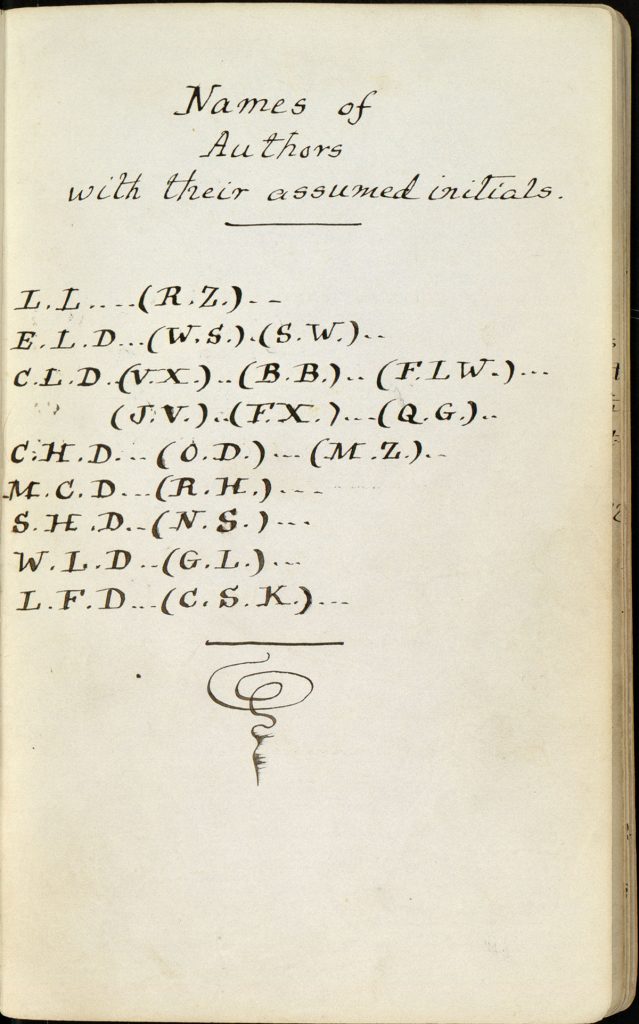 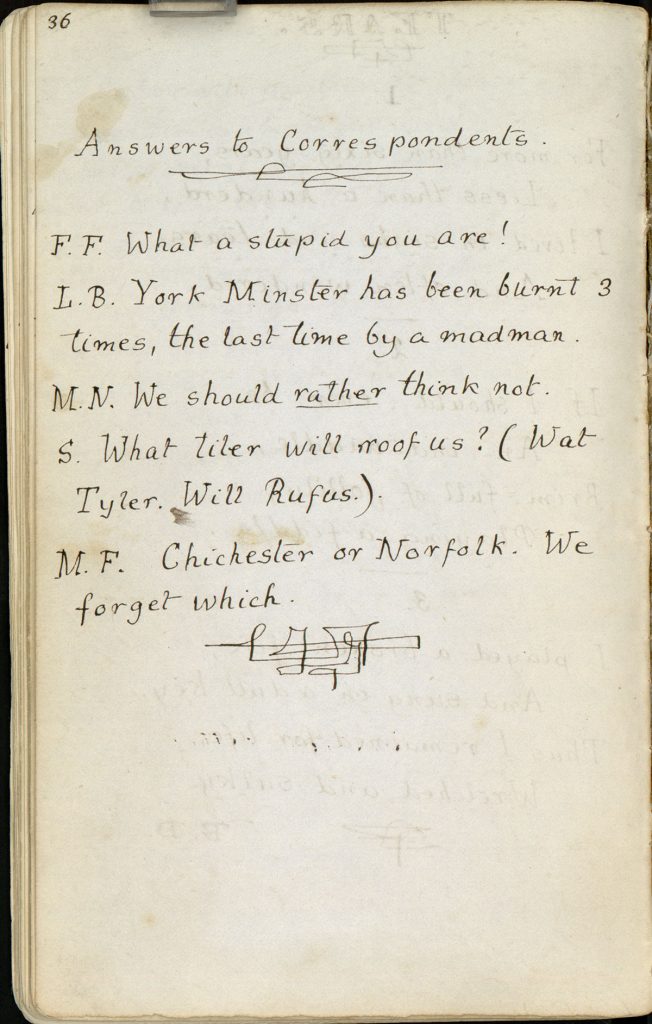 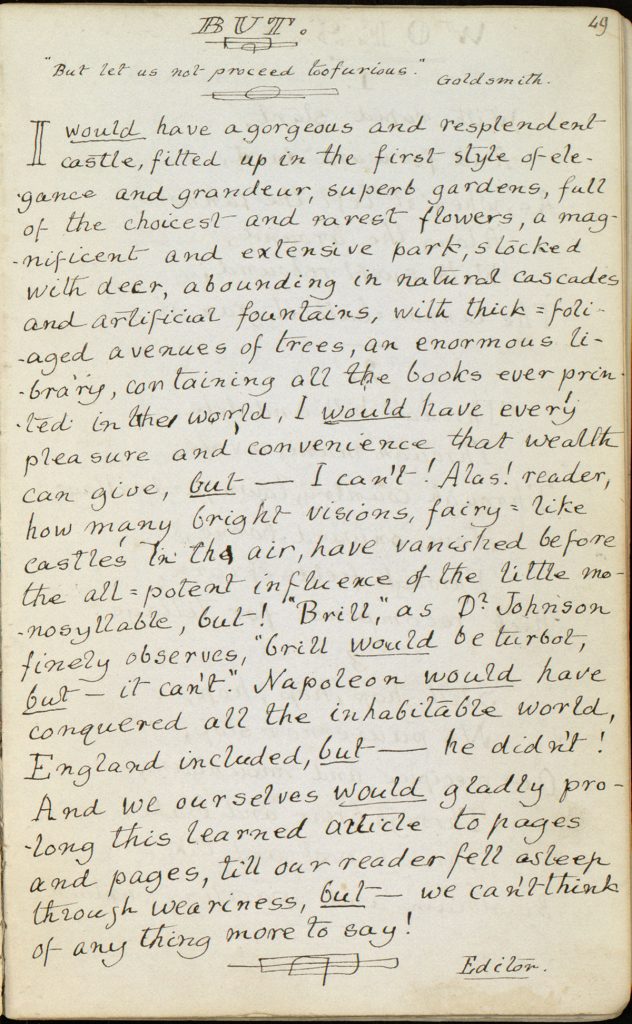 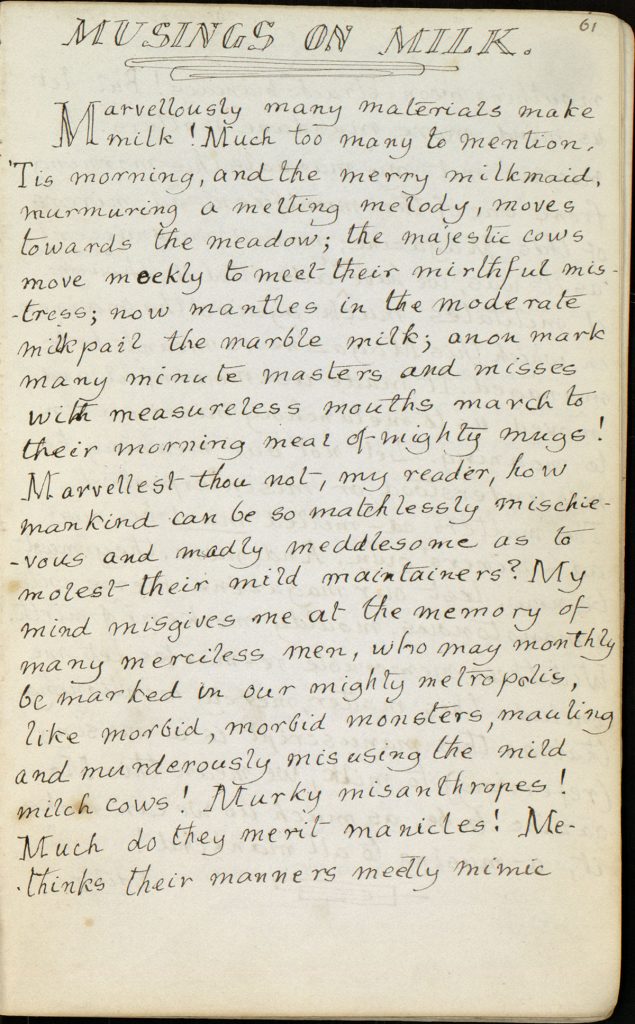 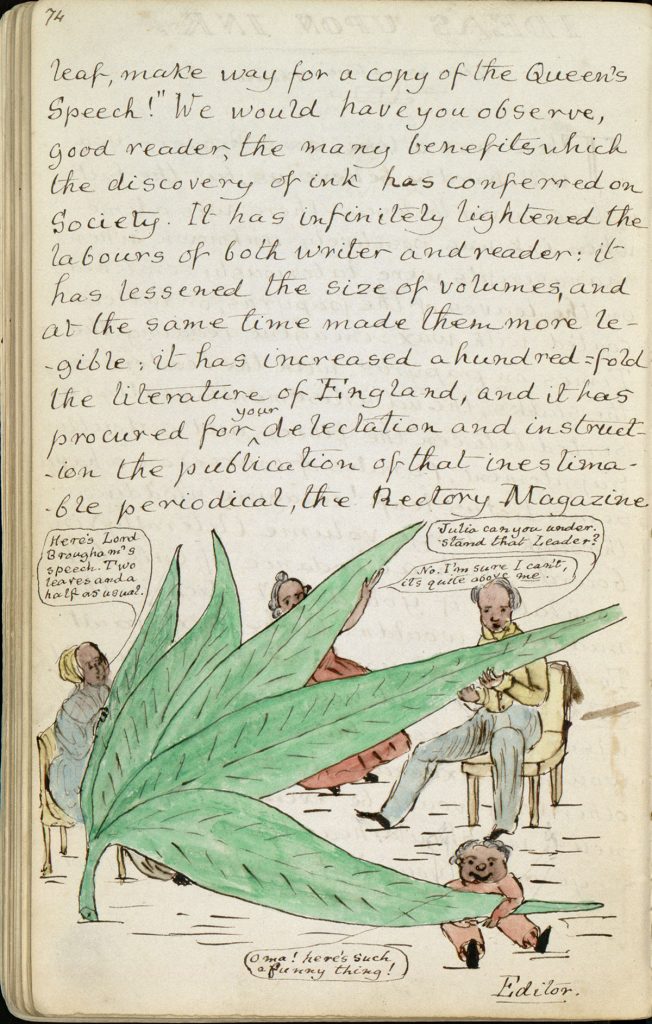 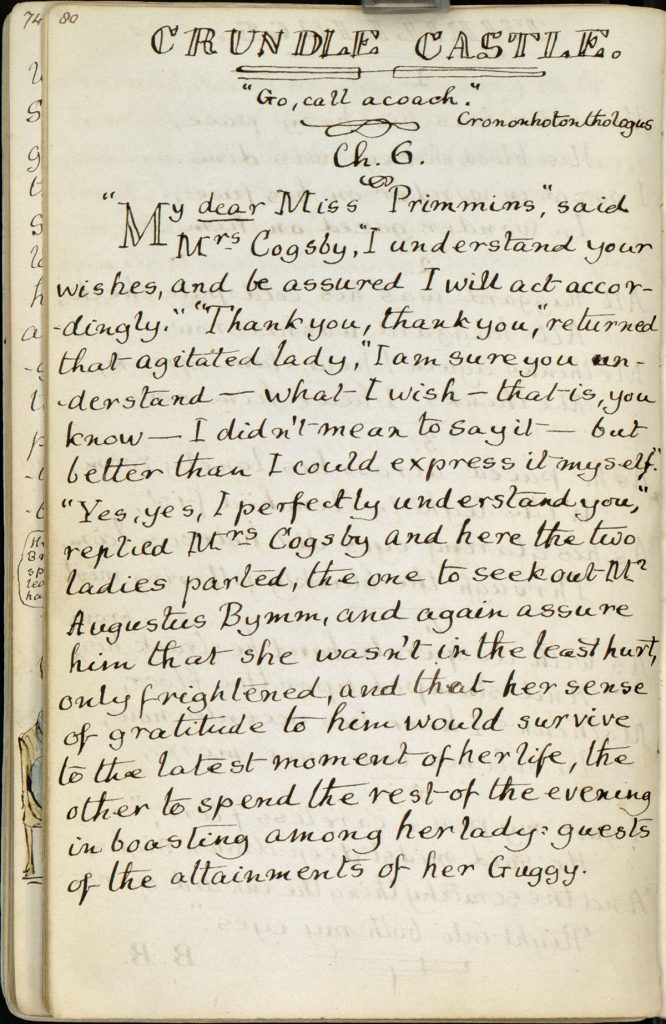 “Reasonings on Rubbish” and “Answers to Correspondents” are just a sampling of the materials in The Rectory Magazine. There are poems, serialized stories, colored illustrations, a disquisition on the word “But,” and the highly alliterative “Musings on Milk.”

The Rectory Magazine offers us a glimpse of a developing young writer whose early work continues to entertain and delight more than 160 years later.

Danielle Brune Sigler is Associate Director for Scholarly Programs at the Harry Ransom Center. Sigler oversees public programming, publications, and fellowships at the Ransom Center. Her research interests include African American history and culture and American religious history. She is co-editor of The New Black Gods.