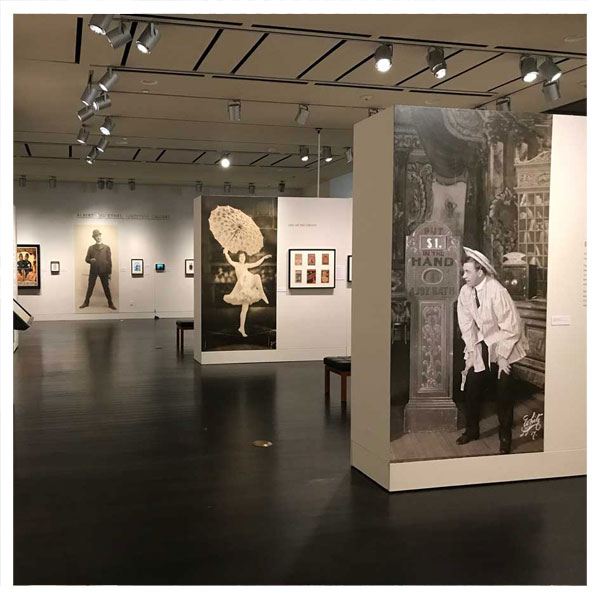 The decision to include collection material depicting blackface minstrelsy in our exhibition on vaudeville is a decision we do not take lightly. Minstrelsy is part of the history of American performance and vaudeville. We have a responsibility not to hide this troubling history, but also to display it in such a way that it is clear that we are not celebrating it.

As the curator of the Ransom Center’s performing arts collections and as the organizer of the vaudeville exhibition, I worked toward finding a careful balance in the way we included troubling content in the exhibition. Prior to the exhibition opening, I had the opportunity to share the ideas and some of the contents—particularly the blackface material—with some members of the university community. One of the faculty members present helpfully mentioned that when he sees disturbing content on display in exhibits, he at least wants to know that the decision to display it was carefully considered. Given that feedback, I thought it would be helpful to offer this article to make visible some of the many considerations that went into the selection, location, balance, and promotion of the exhibition.

In the decades leading up to the golden age of vaudeville from the 1830s to the 1870s, blackface minstrelsy was the most popular form of variety entertainment in the United States and one of the most frequently exported forms of performance internationally. Minstrel acts—including songs, popular dance, and comic sketches most frequently performed by white actors wearing black makeup—were a key influence on vaudeville and offered a basic structure for a vaudeville program in its early years. The national networks of travelling minstrel companies like Christy’s Minstrels or Haverly’s United Mastodon Minstrels provided the early basis for what would become the national network of vaudeville circuits.

To exclude minstrelsy from the exhibition would be a glaring omission and a harmful erasure of this aspect of American performance history. Minstrelsy and vaudeville have had lasting impacts on American popular culture that can still be seen today. The offensive yet wildly popular minstrel character Jim Crow, performed by actor Thomas Dartmouth Rice (1808-1860), would lend its name to the segregation laws of the South. Popular minstrel songs like “My Old Kentucky Home,” “Oh, Susannah!,” and “Camptown Races” are stripped of their overtly racist language and taught to children today. There has also been an enormous critical response to minstrelsy in contemporary scholarship that has made the Ransom Center’s minstrelsy collections among the most frequently studied in the area of performing arts.

This exhibition emerges at a historical moment when The University of Texas at Austin and cities across the country have rightfully reconsidered publicly displaying Confederate monuments in favor of placing them in museums where they can be contextualized. Museums have become important sites for understanding and contextualizing this history for a broad range of audiences.

Of the 202 items on display, roughly 11 of them relate to blackface minstrelsy in some way. They are located in two parts of the exhibition—in the section on the early influences of vaudeville, and in a section on the various kinds of acts that were included in a vaudeville program. Items were chosen for their ability to make specific interpretive points crucial to the larger narrative of the exhibition. When multiple items in the collections could make the same point, preference was given to material that was less graphically and textually obscene. For example, the Ransom Center holds an important early painting of T. D. Rice as Jim Crow that may have been painted during Rice’s lifetime. The painting includes a highly-offensive racial slur written on the canvas. Rather than display the painting, we show a lithographic print depicting Rice performing onstage that doesn’t include the slur. The print allows us to make the central point about the significance of T. D. Rice in the development of variety entertainment in America.

In the section of the exhibition describing minstrelsy as a specific act within vaudeville, smaller-size images were chosen to avoid giving blackface a visual dominance in the galleries. I also made the decision to focus this narrative on a single performer, Roy Arthur, drawing on a collection of his performance materials in the Ransom Center’s holdings. My goal was not to be exhaustive, but to use single performers to gesture toward a kind of act that many people were doing. Arthur represented an economically successful performer of historical note—he “discovered” Eddie Cantor and helped launch the career of the famous stage and screen star—and we had a range of material to choose from. Images on display serve an interpretive purpose of showing the variety within a vaudeville minstrel act. Some unique items like wigs, costumes, and props—which we have for Arthur, but not for other vaudeville performers—would have been interesting to display from a material standpoint, but ultimately didn’t further the interpretive purpose and were not selected. Labels for all of the selected items aim to articulate specific and important points about minstrelsy’s deeply problematic influence on vaudeville.

There was a lot more to vaudeville than minstrelsy, and while it was important to grapple with minstrelsy in the exhibition, it was also important to note the contributions of African American performers in the broader history of vaudeville. Bert Williams is a fascinating figure in vaudeville’s minstrel history. Born in the Bahamas in 1874, Williams was one of a number of actors of African descent who performed on stage in blackface. He took minstrel traditions and infused them with irony, exaggerating his gestures and dances in such a way as to make fun of the white performers who acted in blackface. Williams performed his most famous song, “Nobody,” as his comic character, but sang it with such emotion that audiences might empathize with his character. Large reproductions of photographs are found throughout the galleries, and I chose one for Bert Williams out of character in a suit and bowler hat—his classic promotional image that he used to emphasize the difference between himself as an actor and the character in blackface he was known for. Visitors can hear him sing “Nobody” in the galleries and watch a clip from his self-directed 1916 silent film A Natural Born Gambler.

African American performers were also part of vaudeville outside the context of minstrelsy, and it was important that the exhibition makes this clear for visitors. Performers like Bill “Bojangles” Robinson tap danced alongside the singer and comedienne Sophie Tucker in selected northern theatres that allowed racially integrated acts. The Theatre Owners Booking Association, or the TOBA circuit, offered opportunities for African American vaudeville performers throughout the country. These theatres often paid their performers less, and the travelling conditions were worse than other circuits, leading some stars like Gertrude “Ma” Rainey to suggest that TOBA actually stood for “Tough on Black Asses.” Ethel Waters, Count Basie, Cab Calloway, Sammy Davis Jr., and Jackie “Moms” Mabley were some of the stars who performed on the TOBA circuit and all are represented in the exhibition.

From early in the planning process, we recognized the importance of striking an appropriate tone when promoting an exhibition on vaudeville. There are fun, comic, and entertaining elements of variety entertainment—of course, that’s what vaudevillians were selling—but ultimately the exhibition reflects critically on the period, examining important questions about how race, class, and labor movements intersected with vaudeville during the nearly century-long golden age of its popularity. In our exhibition guide and press statements, we suggest that vaudeville was a snapshot of America in the moment of its performance—the good and the bad. We specifically mention the presence of blackface minstrelsy and racial stereotypes in promotions and in the introductory label text at the entrance to the gallery so that visitors can be aware of this part of the narrative.

It is our hope that the minstrel materials on display will help visitors to the exhibition understand the complicated history of American performance history and encourage further questions about its lasting impacts on our culture.

Dr. Eric Colleary is the Ransom Center’s Cline Curator of Theatre and Performing Arts, and organizer of the exhibition Vaudeville! on display at the Ransom Center from January 29 through July 15, 2018.