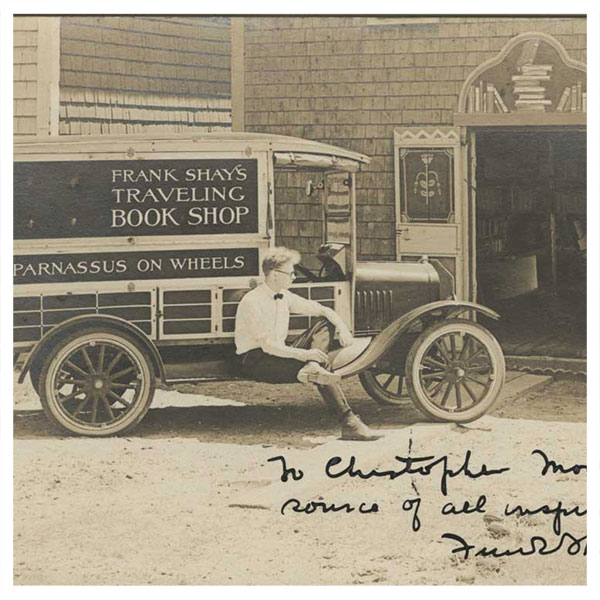 On National Bookmobile Day, the American Library Association celebrates the 930 bookmobiles in the United States that provide library services to their communities, an important form of library outreach that has been ongoing for more than 100 years.

The Ransom Center’s Christopher Morley collection documents another bookmobile tradition: traveling bookshops. Morley(1890–1957) was a novelist and journalist who contributed to the Saturday Review of Literature and served as a judge for the Book-of-the-Month Club. His friend, Frank Shay(1888–1954) opened a bookstore, Frank Shay’s Bookshop, in Greenwich Village in 1920. The following year, Shay transformed a converted Ford into “Parnassus on Wheels,” a mobile bookshop that he took to Provincetown, Massachusetts, in the summers.

Shay’s bookmobile was inspired by Morley’s 1917 novel Parnassus on Wheels. The novel tells the story of Helen McGill’s adventures in her first days as the new owner of a horse-drawn traveling bookstore called Travelling Parnassus. (Named for Mount Parnassus, home to the Muses, literature, and learning in Greek mythology.) With a horse named Pegasus pulling the van and the former owner as her guide, McGill leaves behind her writer brother who regards her only as “a kind of animated bread-baking and cake-mixing machine.” The fictional Travelling Parnassus, like Shay’s Parnassus on Wheels, was not a library, but offered readers outside of urban areas the opportunity to purchase books.

Morley’s collection includes a postcard and photo of Shay’s Parnassus on Wheels. The postcard features a photograph of Shay on the running board of Parnassus on Wheels and is inscribed by Shay to Morley as the “source of all inspiration.” On the back, Shay puns, “ready to resume the task of running down a book buyer.”

The photograph shows Christopher Morley (at right) “christening” Parnassus on Wheels as Frank Shay looks on.

Morley’s novel, now more than a century old, continues to resonate with booksellers. Its title served as inspiration for Ann Patchett and Karen Hayes who founded Nashville’s Parnassus Books in 2011 and who added a Parnassus on Wheels bookmobile named Pegasus in 2016.