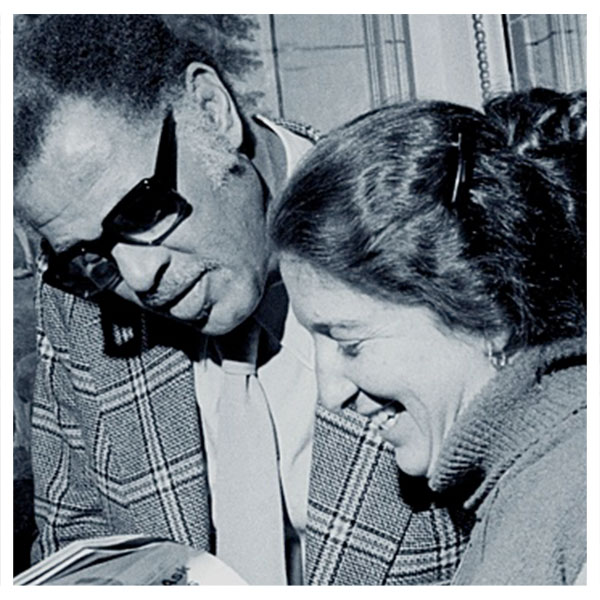 Maxine Gordon has loved jazz music all her life. From going to hear Miles Davis and John Coltrane as a teenager, to working as a road manager and promoter when she was a young woman, to becoming the personal manager and ultimately the wife of one of the most influential jazz artists of the twentieth century, Maxine has seen it all. She makes full use of these experiences in her new book, Sophisticated Giant: The Life and Legacy of Dexter Gordon (University of California Press).

This biography pays homage to her late husband, weaving in passages written by Dexter himself, who began the book before his death in 1990. It also provides historical background on the development of modern jazz and a discussion of the socioeconomic factors that shaped him. Together, these components paint a fuller picture of the man who was Maxine’s husband.

Maxine was the recipient of a Harry Ransom Center fellowship supported by the Andrew W. Mellon Foundation Research Fellowship Endowment.

The Ransom Center hosts a screening of Round Midnight, which stars Dexter Gordon, on Thursday, October 25, at 6 p.m. Maxine will introduce the film and, post-screening, sign copies of her book. The event is free and open to the public.

Ahead of the event, Maxine answers a few questions about the film, her book, and her research. 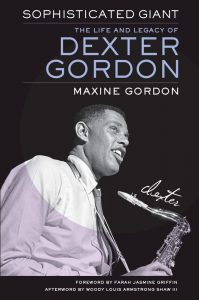 Austin Downey: This book is a mix between your husband’s voice and your own. How did you balance the two when you worked on the book, and how did this influence its overall structure?
Maxine Gordon: In working on the book, I took Dexter Gordon’s written vignettes and letters first and worked around them. It is, of course, his book. I am just the person who promised to finish what he began and I always centered him and his works in the story. I also used photos to help write the story. There are so many great photos in his archive and they, themselves, tell stories.

What does the archival material included in the book contribute to the bigger picture you paint of your husband?
I am first and foremost an archivist and, as we know, without archival material, especially the archives at the Ransom Center, we archivists are nothing. I was very fortunate to meet, online, Dell Hollingsworth, who was the Center’s music specialist at the time I was doing earlier research on Ralph Ellison. She uncovered something that became central to my work, as genius librarians do. This began a lengthy correspondence where I asked for documents and photos. One day she wrote: “You know, we have fellowships here. You could come and do your own research.” I applied for and received the fellowship, and came to Austin in one of the best research trips I have taken. Without the archival material I uncovered there would be no book. 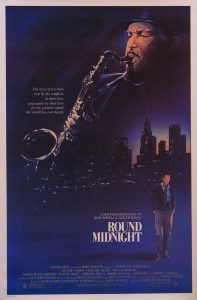 It was an interesting move for Round Midnight’s director Bertrand Tavernier to cast your husband, a real jazz player, as opposed to an actor, for the role of Dale Turner. Do you remember what the casting process was like, and how Dexter felt when he learned he’d won the role?
Well, Dexter considered himself an actor. He said that jazz musicians have acting talent. They go on stage, they relate to the audience, they prepare for the part. He did not consider it a stretch to be asked to star in the film. When he first met Bertrand Tavernier was when Bertrand decided that Dexter must star in the film. He did a screen test and that was it. He was not surprised that he got the part, nor was he surprised that he was nominated for an Oscar as best actor in a leading role. I was shocked but he was not. That was the way of Dexter Gordon.

You and your husband had a longstanding professional relationship, in addition to your personal one. How did knowing and working with him in different contexts inform the way you wrote about him?
Good question. Actually our professional relationship and personal one are not separate. Dexter lived his life in his very special manner, always improvising, always finding solutions to problems. We worked together on his career and in life side by side since the first day we met on the road when I was a road manager. He said it was predestined. I like to think he was right about that. Writing about him was not the issue in finishing the book. It was always having too much research material, too many interviews, too many facts. Luckily, I had the best editor who helped me organize sections and keep other material for the archive.

Much of your research centers on the intersection of African American history and jazz music, and you’ve worked with organizations like the Bronx African American History Project at Fordham University. Can you tell us about some of the projects you have coming up next?
My next project is a book on four jazz musicians—Velma Middleton, Melba Liston, Maxine Sullivan, and Shirley Scott. If you know the book Four Lives in the Bebop Business, by A. B. Spellman, you will know that it is my inspiration. I want to focus on aspects of these four lives, particularly the intersection of their arrival in New York City from St. Louis, Los Angeles, Pittsburgh, and Philadelphia and the influence New York had on their lives and careers. I discovered Maxine Sullivan through my work with the Bronx African American History Project and of course my work on Melba Liston comes from the Ransom Center.