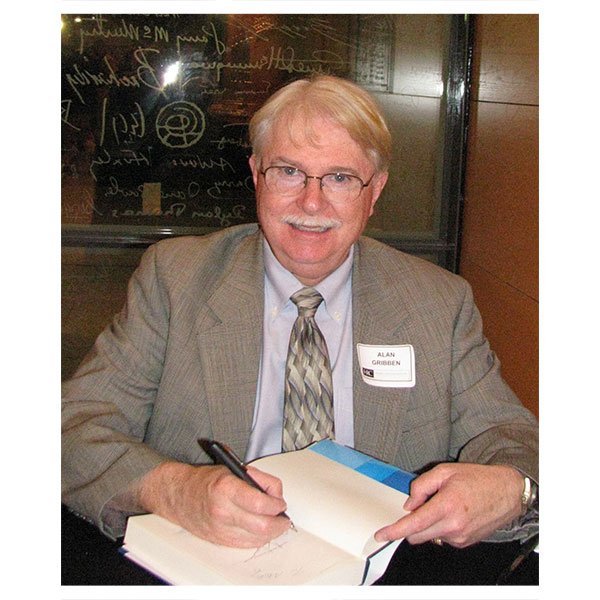 Alan Gribben has spent almost 50 years hunting down Mark Twain’s formidable personal library, which housed more than 3,000 titles. In the first volume of his findings, Mark Twain’s Literary Resources: A Reconstruction of His Library and Reading (NewSouth Books, 2019), Gribben presents the discoveries of his life’s work, uncovering Twain’s favorite books as well as his “Library of Literary Hogwash.” Gribben then takes a fresh look at Twain’s writing with an eye towards the influences of the author’s personal reading.

Gribben teaches English at Auburn University at Montgomery. He previously taught at The University of Texas at Austin, during which time he wrote a biography on Harry Huntt Ransom, the founder of the Harry Ransom Center.

Austin Downey: You’ve been searching for books in Twain’s private library for nearly 50 years. How did you first become interested in doing this?

Alan Gribben: In 1967 I had the good fortune to become employed by Frederick Anderson (1926–1979), the fifth editor of the Mark Twain Papers. I was to be one of his editorial assistants for the Mark Twain Project, a publishing series underway in the Bancroft Library at the University of California at Berkeley, the campus where I was studying for my doctorate degree in English. Two years later, I needed to choose a dissertation topic. During my editorial stint at the Mark Twain Project I made a point of inquiring of visiting scholars about research topics that might benefit the field of Mark Twain studies. To a person, they answered: “Please, someone, undertake an inventory of Mark Twain’s library and reading.” They explained that any scholar writing on Twain had to check dozens of disparate sources that revealed bits of his literary knowledge, but even after considerable effort the facts often proved elusive.

Owing to auctions authorized by Twain’s daughter in 1911 and 1951, Mark Twain’s library books had been widely scattered across the United States and consequently the contents of his collection remained relatively unexplored, providing an ideal opportunity for a graduate student who wanted to contribute something useful to the academic discipline I wanted to enter.

What have been some of your most exciting finds?

There have been many. I ordered from the UCLA library a copy of George Combe’s Notes on the United States of North America (1841) and was astonished to receive from the Interlibrary Borrowing Service Twain’s own copy, inscribed and annotated. I notified the Library of this find and it was added to the University of California Berkeley’s Mark Twain Papers collection.

In the 1970s, I drove a Volkswagen Beetle across the country to visit places where I might find parts of the library, including Twain’s home, booksellers and libraries holding Twain’s collections, and the relatives of Twain’s housekeeper, Katy Leary, who had been awarded books from the author’s library after his death. In Rice Lake, Wisconsin, I found sacks of books left on the porch for a charity store by an elderly relative of Leary’s. Imagine my surprise to discover that these brown paper bags contained almost 90 books belonging to Twain and his family! Many of them were signed and annotated by Twain himself.

I paused to remember that I had vowed never to collect any books from Twain’s library, even if the opportunity presented itself for a bargain, or in this case, were free for the taking. Because I had made clear my intentions to booksellers and collectors, I enjoyed unstinting cooperation from book dealers, collectors, scholars, and librarians. In this case I found a phone book and made calls trying to locate relatives of the elderly woman to alert them about the treasures about to be carted away. Luckily, I found a daughter who immediately met me at her mother’s home. Eventually that collection was donated to Elmira College in Elmira, New York.

How did your knowledge of Twain’s annotations help you find copies from his libraries?

Twain began writing witty comments in his book margins during his courtship of Olivia Langdon, the daughter of a coal magnate. This habit left behind confirmations that he read certain books and recorded his reactions to passages in the books, whether complimentary or derisive. Twain read intensely with pencil or pen in hand, ready to express an opinion. Twain also sought out poorly written works to add to his “Library of Literary Hogwash.” Among his mocking notes are these: “an honest and upright idiot who believed he knew something of the English language,” “quaint fashion of building English sentences on the German plan,” and “that tiresome Ericson & his dismal ‘poetry’—hogwash, I call it.” Forgers occasionally attempt to emulate Twain’s marginalia to inflate the price of nineteenth-century book, but a thorough knowledge of Twain’s handwriting enables experts to detect these spurious efforts. 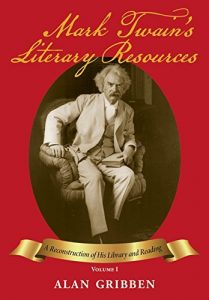 You devote several chapters to the connection between Twain’s work and the work of other writers that he read. How did you find these connections, and as a Twain scholar yourself, what do they mean to you?

In the Mark Twain Papers at Berkeley, I read Twain’s personal notebooks and voluminous correspondence looking for clues to his reading and literary resources—the plays he attended, the songs he heard, the newspapers he read. I also heard from numerous scholars who sent me tips about references Twain made in his books or writing.

I greatly admire and am indebted to Kevin Mac Donnell, an Austin, Texas rare book dealer and Mark Twain collector, for sharing his erudition about both Twain and that era of American literature. His knowledge seems almost infinite, and his collection of Twainiana contains more than 9,000 items. Mac Donnell is hands-down the world’s leading collector of Mark Twain items.

A chapter in Volume One of my Mark Twain’s Literary Resources titled “Stolen from Books, Tho’ Credit Given” addresses his indebtedness to travel guidebooks produced by other authors as he was writing his own. Twain sold his books through subscription services rather than in retail stores. The buyer of a subscription book expected bulky tomes. Twain was giving subscribers their money’s worth in extra pages of descriptions. Twain would elaborate on what others wrote, embroider details, and correct their impressions in his The Innocents Abroad, Following the Equator, and other travel narratives.

In countless instances of literary allusions in his writings, Twain borrowed details. For example, in Huckleberry Finn’s chapters that deal with Jim’s imprisonment, Tom Sawyer and Huck create cruel tasks for Jim purportedly necessary for his escape. Twain was imitating the authors of popular dungeon literature of the time: Dumas, Casanova, Saintine, and Baron von Trenck. In Huckleberry Finn, Twain also has fun with the Duke’s misquoted version of Hamlet’s soliloquy.

What did you find in the Ransom Center archive that contributed to your research? What do you think is the value of archival sources?

The information in the annotated catalog is scholarly in nature, but accessible to the general reader, too. A large percentage of the books listed in Mark Twain’s Literary Resources invite further and fuller investigations by young scholars regarding their connections to Twain and his era.

Can you give us a hint of what’s to come in the next volumes?

The forthcoming Volumes Two and Three of Mark Twain’s Literary Resources: A Reconstruction of His Library and Reading (NewSouth Books, 2019) contain the annotated catalog. Here in alphabetical order is the heart of my almost half-century of research. These volumes will be a greatly expanded version of my 1980 Mark Twain’s Library: A Reconstruction, which was based on my 1974 doctoral dissertation of 2,370 pages.

I had imagined a new type of reference work for my dissertation. Instead of the accepted form of simply listing the surviving books from a writer’s personal library or attempting to deduce his or her reading from textual evidence, I combined all of the known information about book titles, inscriptions, marginalia, scholarly commentaries and other facts and conveniently assembled them in one location. In addition, I added my own commentary about various authors. The new 2019 edition will conclude with a vast index covering all of the titles, editors, illustrators, co-authors and co-editors, pseudonyms, and even subjects such as colonialism, slavery, women’s rights, art history, the Roman empire, cookbooks, gardening, natural history, and many other topics.