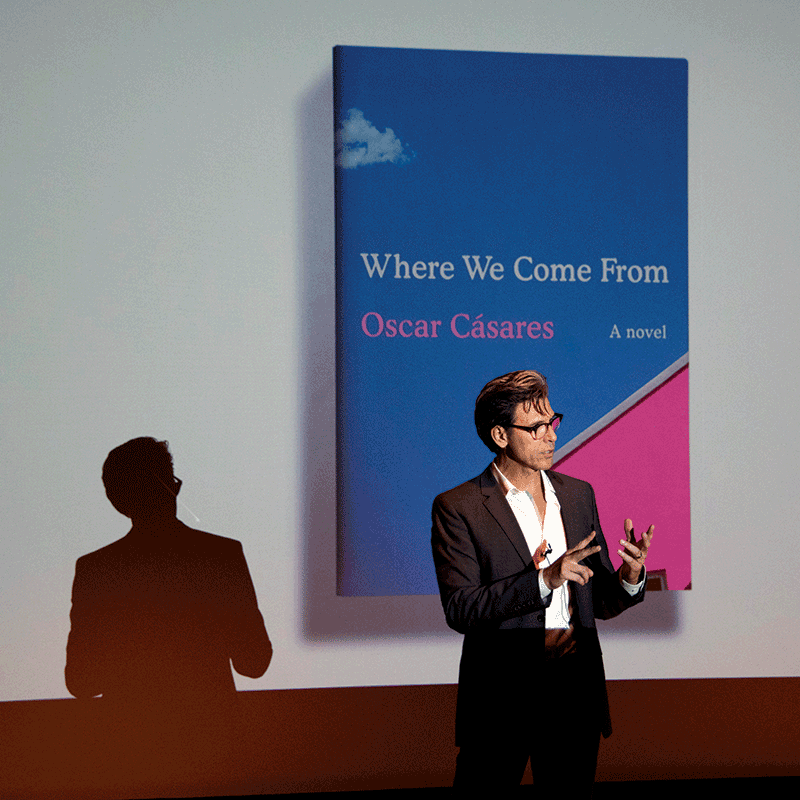 The papers of Oscar Cásares—a Creative Writing Professor at The University of Texas at Austin and author of the award-winning books Brownsville: Stories (2003), Amigoland (2009), and Where We Come From (2019)—are now housed at the Ransom Center.

Cásares grew up in a house with no books, but he was surrounded by gifted storytellers who told him about life along the U.S.–Mexico border. This oral tradition was an important influence for the writer he would become, one who enriches the strong tradition of writers from the Rio Grande Valley, including Jovita González, Américo Paredes, and Rolando Hinojosa.

“The brilliant work of Oscar Cásares continues and markedly enlarges this distinguished tradition,” says José E. Limón, Professor Emeritus of American Literature at The University of Texas at Austin. “Any future literary history of this tradition would be seriously deficient without consulting this new and wonderful acquisition.”

Cásares is the recipient of numerous honors, including fellowships from the National Endowment for the Arts and the Guggenheim Foundation.

The archive includes notebooks, annotated drafts, early writings, and other materials. It offers intriguing possibilities for exploring the creative process behind works inspired by the borderlands, where cultures come together.

In 2019 you published your third book, Where We Come From, and you clearly have many more stories to tell. What led you to place your papers at the Ransom Center at this point in your career?

Oscar Cásares: A few years ago, I was approached by another archive about my papers, but it felt premature, given the modest number of books I’ve written and the fact that I am still mid-career. It also felt distracting, like something that I should wait until much later to do, if ever. On the other hand, the truth was that since I started teaching at UT, in 2004, just about every semester I’ve been asked to speak to literature classes, Latina/o Studies classes, and Plan II classes. So when the Ransom Center became interested in my papers, it felt like this might be a way to make my materials accessible. I actually learned to write by writing Brownsville, and so if some of this material can help a student take the first steps of their own journey, especially someone with a similar background, then this seems like a good thing to me.

Before becoming the writer you are, you worked in advertising. What led you to advertising? And what moved you away from it and toward writing?

Oscar Cásares: What led me to advertising was the same thing that leads young people down so many other paths, which is essentially not knowing what else to pursue. But I did enjoy working in that industry, and it gave me the time to figure out what I really wanted to do. The great irony of my papers being placed at the Ransom Center is that I grew up in a house with no books. None. I wasn’t read to as a kid, nor did I pick up the habit in school, or even as an adult. If anything, I did my best to avoid books. The only thing that saved me was that I had been born into a family of storytellers. It was an oral tradition taking the place of any literary influence. My father’s younger brother, my tío Nico, would tell stories that dated back to our family arriving in Texas in the mid-1800s, the abuses committed by the Texas Rangers in South Texas during the early 1900s, and the time my father’s family spent traveling as farmworkers during the Great Depression. Books came into my life only when I started writing, already in my early 30s. After spending about ten years working in advertising and media, I realized how little the lives of Mexican Americans, and Latinos in general, were being reflected in the larger culture. I thought, if only for myself and people with a similar background, maybe I could change that.

You have been a student of creative writing, you are a writer, and you lead creative writing workshops. How has your journey as a writer affected the way you teach and mentor students?

Oscar Cásares: It all goes back to the living rooms and backyards where my tío told me those stories. At some point, I understood it wasn’t simply the stories but also how the stories were delivered and the immediacy he experienced when his listeners connected with the story, or didn’t. That sense of connection was something that interested me from the beginning, the idea that a reader’s presence and connection with what you have written is not a given but something that needs to be cultivated and maintained, no different than if you, the writer, were literally sitting there telling them the story.

In your archive, you’ve saved admission letters to writing programs and letters about fellowships and grants you were awarded, but you also kept letters of rejection from publishers or magazines. Why did you save these letters, and how did you cope with these setbacks?

Oscar Cásares: I try not to dwell on those setbacks, but I do believe that once we get beyond our frustration and bruised ego, some of these disappointments offer us a chance to see things more clearly. That sometimes what one person sees as a problem isn’t actually the real problem but only what’s most apparent and easiest to articulate, and the path forward isn’t about “fixing x problem” and instead something entirely different that time only reveals to us later.

Your archive includes notecards outlining scenes in your novels, research materials, notebooks, and many edited drafts. How do you approach your writing, and what can you tell us about your creative process?

Oscar Cásares: For me, regardless of what I’m writing—novel, story, essay—it begins with the voice. I have to “hear,” at least in my mind, what that narrative voice sounds like, what it may be trying to tell me, and ultimately my reader, but that maybe the character isn’t ready to say out loud. That first utterance is key and essentially directs the rest of the piece. In my papers, that searching can go on for what feels like an eternity. With Amigoland, I had been working on it for over a year and had more than 300 pages when, over dinner, my wife asked me how my day had gone. “Great,” I said. “Today I wrote the first line of the novel.” I was still able to use most of the earlier material, but it was only then that I understood where the source of that material was coming from and where it needed to go moving forward.

I started using notecards on that book as a way of storyboarding the narrative, which was a holdover from my days working on TV commercials. While the process is entirely different, the storyboard in this case gives me some sense of control over the rhythm and structure of the story. Laying it out in this manner, I’m able to step back from the writing and experience it as a reader.

The hybrid culture in Brownsville, where you grew up, is important to your writing. When did you realize that you wanted to explore that culture?

Oscar Cásares: When I left Brownsville, though I didn’t realize it at the time, there was part of that experience that got compartmentalized and shut off from the larger world I was entering. Part of my decision to start writing involved reclaiming that other part of myself. As for the hybridity, I don’t know if that’s something you’re aware of when you’re living in it or, for me, writing about it. It was simply part of the experience, and there was no writing about Brownsville, about the border, without that being central to the stories I wanted to tell. At first, what I read from other Mexican American writers had to do with being an oppressed minority, being on the outside looking in, but that simply wasn’t what it was like for me growing up in the 1970s and 1980s. I was writing about Brownsville, Texas, where Mexican Americans make up over 90% of the population. And then it dawned on me, I wasn’t writing about a minority; I was writing about the mainstream. Which isn’t to suggest that we didn’t have pressing issues, but only that our experience as Mexican Americans was specific to the region and its particular history.

In your papers, there’s a handwritten first draft of your story “Domingo.” You wrote the story in Spanish and then translated it word by word into English to, I think, help you feel the voice of a character. How did this approach affect your writing process, and what challenges do you face when capturing the voices of characters in border towns?

Oscar Cásares: Yes, I originally wrote the story in my pocho Spanish. At the time, still early into the process of learning to write fiction, I found it a little weird when I read a story with dialogue and interiority written in English for a character that clearly didn’t speak the language. In this case, Domingo, the protagonist, is a Mexican immigrant navigating a bilingual world, and I had a sense that writing it even with my crude Spanish would bring me closer to telling his story. So when he thinks of wealthy people as “gente de dinero,” as my parents would describe them, the line in my literal translation came out as “people of money.” It sounds a bit stiff, but I felt that awkwardness was part of his experience. Later, I would get more comfortable writing dialogue in English when my characters were actually speaking in Spanish, which is something that happens with many of my characters. I hear them in Spanish, but somewhere in my brain, between understanding what the characters need to say and getting it on paper, the words translate to another form of English, one that tries to bridge the two languages, echoing the cadence of the original language, at least in my mind, while staying true to the character’s perspective.

Is storytelling still as important in your household as it was when you heard your uncles telling stories as a child, stories that helped inspire your own writing?

Oscar Cásares: Absolutely. Storytelling is how we stay connected; it’s how our children learn about our journeys and maybe figure out their own. Years ago, when my kids were still little, I started a tradition of setting up a Día de los Muertos altar, which is something I hadn’t grown up with but that I realized was an opportunity for me to remind my children of those who came before them, of how we got here, what our struggles were as well as our achievements. 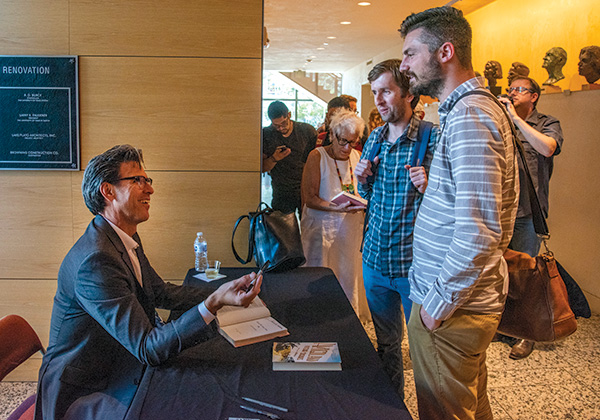 What do you hope students, researchers, or readers might learn from your papers?

Oscar Cásares: I would hope for my papers to tell a deeper, more nuanced story of the border, of its people and culture. These are folks whose lives have been routinely marginalized or misrepresented. My aim has always been to tell as honest an account of the borderlands as possible, as it was handed down to me, and ideally these papers will help people gain a better understanding of my process in writing about these two worlds and languages that exist as one.

Ricardo Castro Agudelo is a PhD Career Pathways Fellow and Curatorial Assistant at the Ransom Center.