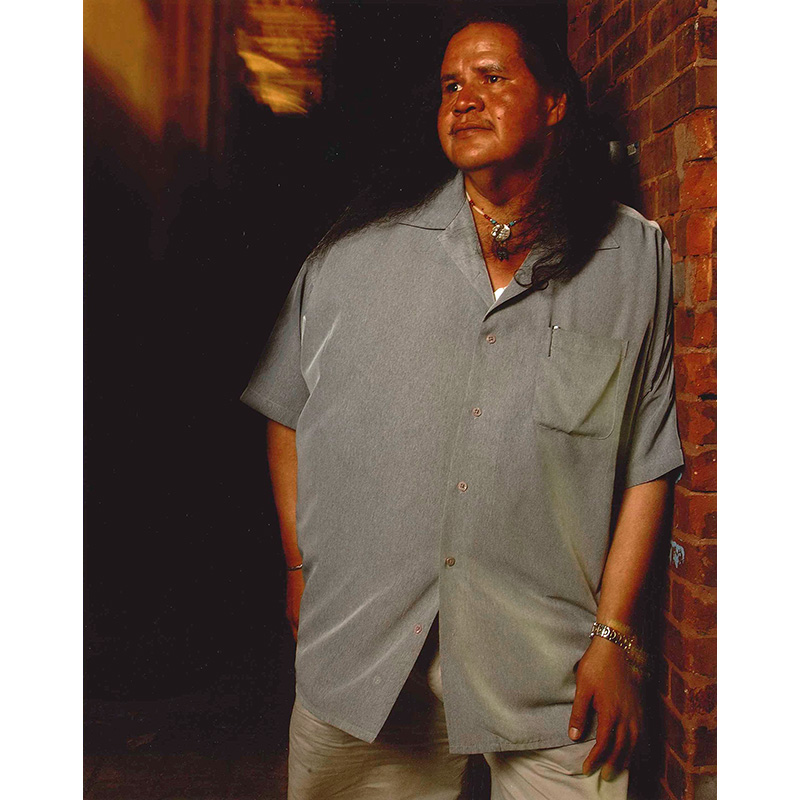 The Harry Ransom Center is proud to hold the papers of playwright and poet William S. Yellow Robe, Jr. A member of the Assiniboine Tribe, Yellow Robe was a lecturer at the University of Maine and the award-winning author of Grandchildren of the Buffalo Soldiers, Wood Bones, and Better-n-Indins. He died in 2021 at the age of 61. The papers, a recent gift from Yellow Robe’s wife, Jeanne, include drafts, rehearsal scripts, letters, photographs, publicity material, critical reviews, digital files, notebooks and more. We are grateful to Jeanne Domek Yellow Robe and Deborah Murad at DGCM, who is managing the licensing of Yellow Robe’s work.

The following tribute to William Yellow Robe is written by his friend Jace Weaver, founding director of the Institute of Native American Studies at the University of Georgia. Dr. Weaver edited and introduced an anthology of Yellow Robe’s plays, Restless Spirits, with SUNY Press in 2020.

Sometimes you meet someone and you know immediately you’ve met a friend for life. Though I had known Bill Yellow Robe’s work for two decades, we had never met until I went on Facebook about six years ago. I ran across Bill, and we instantly bonded as we improvised a scene in the comments to one of his posts in real time. Bill was trying to bring twenty-four cans of SPAM onto an airliner. I was a TSA agent explaining to him that he couldn’t because the gelatin around the pink meat qualified as liquid.

Shortly after that random encounter, I invited him to come and read from his work at the University of Georgia. He was gentle and genuine, and he was one of the funniest people I’d ever met. Within a day, we hatched the plan for the book that became Restless Spirits, the third anthology of his plays, which I edited.

Thereafter, we talked on the phone regularly and saw each other when we could. In October, 2017, at the Returning the Gift festival at the University of Oklahoma, I had the privilege of introducing Bill. For the first and only time, I got to see him work. He dragooned volunteers into doing staged readings of some of his work as he directed. One of those short works was his one-act One Step In, its only public performance. I chose that play to close out Restless Spirits. I had long heard that, as an actor himself, Bill was an “actor’s director.” In a brief couple of hours, I got to glimpse that.

Not long after that, on another trip to Georgia, I sat with Bill at an early staging of Choctaw playwright LeAnne Howe’s powerful Savage Conversations. His comments afterwards were some of the most generous I have ever heard offered by a dramaturg.

During the nineteenth century, it was a common colonialist lament, “Where is the African Proust?” Albert Schweitzer famously called Nobel laureate Rabindranath Tagore the “Indian Goethe.” In every instance in which a colonial author was compared to a canonical writer, there was the clear implication that he or she was lesser and inferior to the real Proust, the real Goethe, the real Shakespeare.

Once over lunch, as we were formulating Restless Spirits, Bill and I discussed this phenomenon. I told him that to call him a great Native American playwright was too limiting, pigeonholing him as Schweitzer had Tagore. A simultaneous twinkle and tear came to his eye. “Would you call me a great American playwright?” he asked.

Bill wrote more than sixty plays. Less than a third of them have been published. It is still my hope that more of these will be anthologized. His archive at the Ransom Center will permit scholars, students, and, I hope, the public to engage first-hand with this warm and creative individual, a brilliant mind, and a theatrical genius.

Bill maintained that he wrote for Native people. Whenever he read in Native communities, he carried photocopies of his work to distribute to those who asked, and he provided copies of his plays to tribal libraries. He always gave immeasurably more than he got. One of the things of which he was most proud was that his play Sneaky had been staged by water protectors at Oceti Sakowin Camp during the standoff at Standing Rock over the Dakota Access Pipeline.

I am grateful Bill lived long enough to see Restless Spirits in print. I had the privilege to offer a few too brief words at Bill’s memorial held at the Public Theater in New York. Sometimes you meet someone, and you just know you have met a friend for life. In the case of Bill and I, we just didn’t know that time would be so short.

The William S. Yellow Robe Papers are open for research in the Harry Ransom Center’s Reading and Viewing Room.