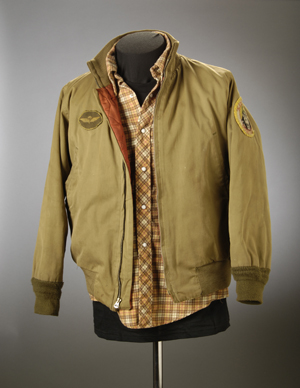 Over 30 years of teaching, I can remember many occasions where students were excited and interested, but my Plan II Honors Signature class’s visit to the Ransom Center on October 4 marks the first time that I have heard audible gasps of astonishment. The class arrived with high expectations, knowing that even among the “gems of the university,” the Ransom Center is unique. They had ordered an eclectic collection of treasures to view: the original manuscript of Arthur Conan Doyle’s “A Scandal in Bohemia,” a Shakespeare first folio, Robert De Niro’s jacket from Taxi Driver, Volume 1 of the 1609 Douay Old Testament, original notes from a Woodward and Bernstein interview with Deep Throat, Abraham Ortelius’s 500-year-old map of the New World, a set of original architectural drawings by Frank Lloyd Wright, and various other rare items. The students came expecting that those exhibits would be the highlight of the day; what they did not expect was that the real magic would be a talk by Director Tom Staley followed by a personal tour of the closed, nonpublic sections of the building.

These freshmen students knew what they experiencing. As one student wrote afterwards: “Walking through rooms filled with original movie posters, books filled with presidential autographs, and other priceless historical artifacts spread casually along shelves was incredible in and of itself, but the places and people Dr. Staley took us to were even more remarkable. Seemingly without ever planning to do so, he showed us the full scope of the Ransom Center’s activities and their significance, everything from the meticulous preservation of the cover from a first edition of The Great Gatsby to colorful sketches of Macy’s parade floats from 40 or 50 years ago.”

Another student was as struck by the excitement of the Center as fully as he was by the items: “Having a backstage pass with Director Tom Staley as guide was a spectacular experience. Simply observing his reactions to the artifacts we saw being restored revealed to me the passion that goes into maintaining this Center.”

And: “Around a corner, we encountered an original poster for the 1962 film adaptation of To Kill a Mockingbird—you just don’t find this sort of thing anywhere else. Sometime later in the trip, we were taken to a room where an ancient map a dozen-and-a-half feet long was undergoing a preservation process. You see this sort of artifact on the Discovery Channel and think, ‘Oh, that’s neat!’ but it is only when you see it first-hand that you get a true appreciation for the talent, dedication, and effort that goes into it all.”

These students had never seen anything like the Ransom Center, and I am pleased that they were wise enough to understand how rare an opportunity they were given. I understood that opportunity as well, and I am not embarrassed to admit that my own jaw dropped more than once during the visit. What an astounding afternoon.