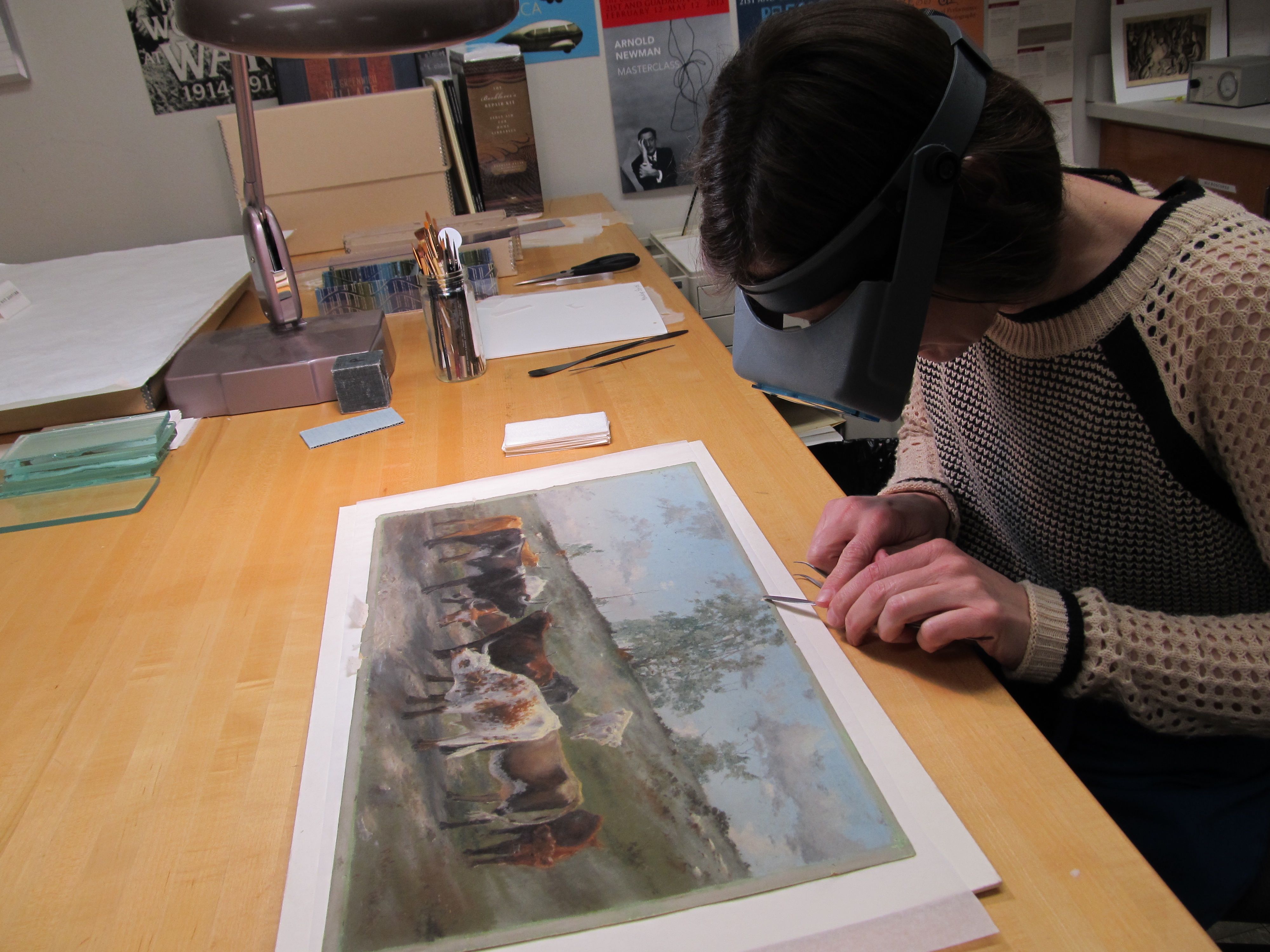 I spoke with Ken Grant, the Ransom Center’s Exhibitions Conservator, about the journey Reaugh’s works have taken to be prepared for the current exhibition. First they had to be rid of some tiny invaders: mold.

“They’re mostly field sketches, and you can imagine somebody driving around in 1919 West Texas [as Reaugh did], with no climate control at all,” Grant explained, noting that pastel sticks and pastel paper both contain organic material attractive to mold. “It’s a very dry climate, but there’s rain, there’s humidity, so the paintings were exposed to the elements.”

The artwork now resides in carefully controlled temperature and humidity conditions, although that just means that existing mold goes dormant. “It doesn’t disappear,” Grant said. “If you were to take the Reaugh pastels outside on a hot, humid day, it would start growing.”

Paper conservator Heather Hamilton examined the Reaugh artworks under a microscope prior to the exhibition. She gave a number of the artworks mold mitigation treatments, which somewhat lightened areas that had become darkened and discolored.

Once conservation and preservation work was complete, the exhibition services team planned how to best present the artwork. This involved many people and meticulous attention to detail to help Reaugh’s artwork shine.

Their efforts included new glazing—what we normally think of as glass, though today it’s usually more high tech than that—as well as new frames and mats for some of the pieces, and reinforcement of the original frames for those works that came already framed.

In 1937, the University received Reaugh’s works, most framed and glazed in Reaugh’s own materials. “He wasn’t a wealthy guy,” Grant shared. “He worked on a shoestring budget, and he assembled these framing structures with whatever he had to hand.” Reaugh glazed his pastels with nineteenth-century window glass. “It has a lot of flaws in it,” Grant explained. “It has bubbles, it has wavy portions to it, and it’s often of uneven thickness across the sheet.”

To prepare for the exhibition, conservator Hamilton supervised the reglazing of all the pastels with a material called Optium. This coated Plexiglas is less fragile than glass, reduces glare, and has a coating to reduce the buildup of static electricity.

“Uncoated Plexiglas is prone to generating a static charge,” Grant explained. “Around a friable [easily crumbled] medium like pastel, that’s very, very bad, because it can pull the particles—which are basically a colored powder—right off the surface.”

The frames were another matter. Some of the works had been fitted with unattractive utilitarian frames for an exhibition on campus decades ago. Grant set out to acquire new frames to match Reaugh’s original frames and mats and ensure a harmonious presentation in the show.

Exhibition services collaborated with Curator of Art Peter Mears to select one of Reaugh’s original frame styles to copy, and then hired Austin frame maker David Gentry of Gentry Custom Frames to craft a reproduction. Gentry then hired a wood mill to make the molding for the frames. Reaugh painted his frames a very distinctive metallic green with an aged patina. Just painting it in a flat matching paint would not do; the paint had to be layered. Gentry figured out a way to layer these paints to achieve a good reproduction of Reaugh’s color and metallic sheen.

“If you didn’t know, right off hand, and you were standing just a little away from the wall, you would not be able to really tell the difference,” Grant said. “It visually integrated whole sections of the exhibition. Between the period and reproduction frames, everything looks unified.”

Reaugh also painted his mats a similar metallic, patinated green, which became another idiosyncratic step that the exhibition preparators needed to reproduce.

With no information on what colors or paint-mixing techniques Reaugh used for his frames or his mats, “It all had to be done by eye,” Grant said, “and we are fortunate to have Rob Hay on staff.  Rob is an accomplished painter and he was able to reproduce the color of Reaugh’s painted mats with modern colors.”It’s really quite wonderful.”