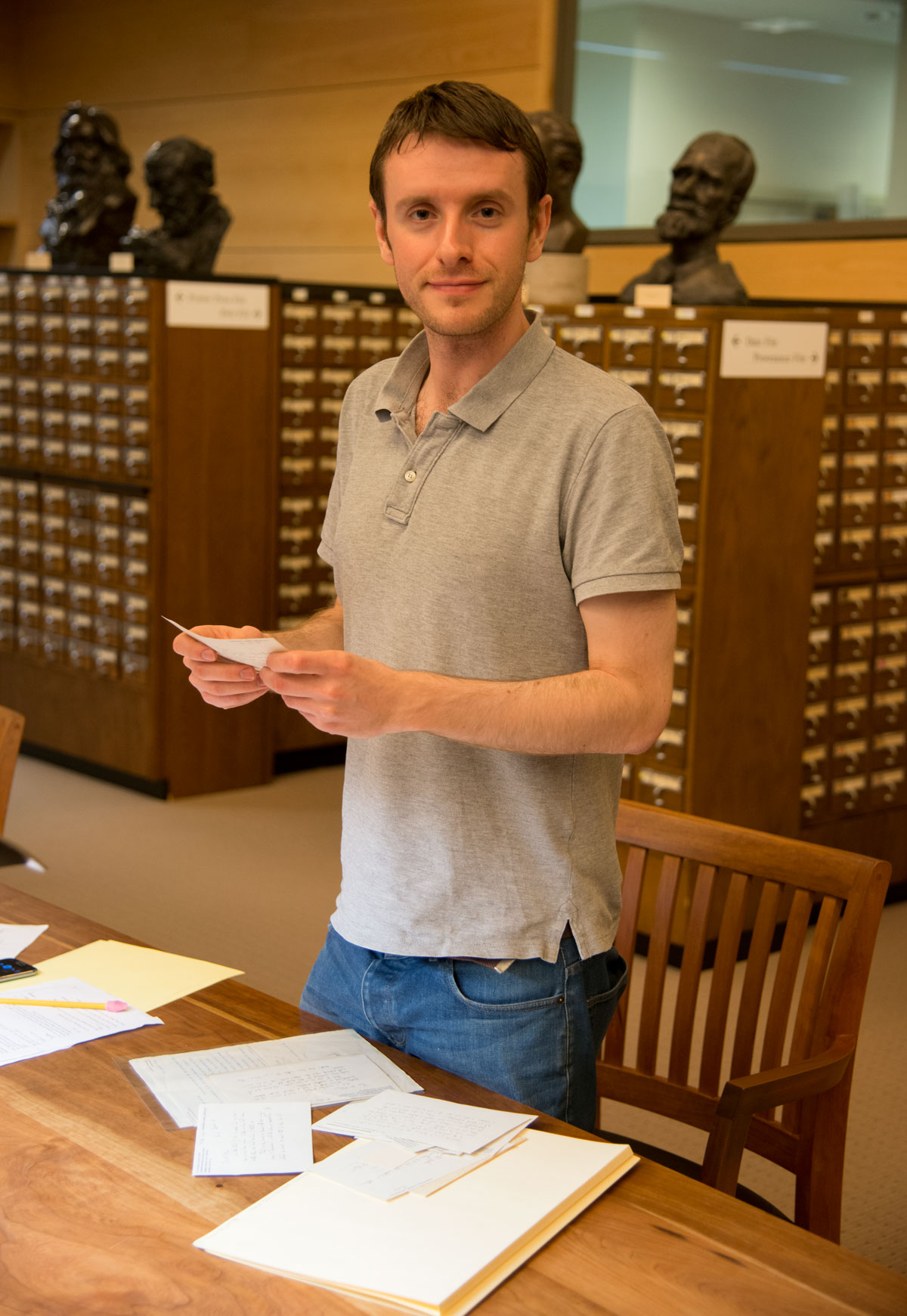 I visited the Harry Ransom Center for two weeks to access the collection of St. John Ervine (1883–1971), an enigmatic, occasionally-forgotten figure who nonetheless casts a spell over a select band of Irish scholars and historians. His personal story fuses both the culture and politics of his Ireland.

As a playwright, manager of the Abbey Theatre during the Easter Rising of 1916, wounded World War One veteran (he lost a leg in Flanders in 1918), and in his later incarnation as a fierce polemicist and acerbic journalist, he ruffled many feathers and lived a turbulent life!

Ervine was born in a working class Protestant home in east Belfast. His father died when he was an infant, so he was raised by his grandmother and then by his deaf mother who ran a boarding house for others with hearing impairments. Ervine was bright but restless, being expelled from six schools. Finally settling down at a Presbyterian-run institution, he missed out on a place at Trinity College Dublin because his family lacked the finances. He worked as a clerk and left for London in the early-1900s, joining the Fabian Society and striking up a friendship with the influential playwright George Bernard Shaw. Ervine eventually wrote a biography of the latter which was published in 1956, winning the James Tait Black Memorial Prize (it remains a standard Shaw biography and a benchmark in Shavian criticism). He returned to Ireland to manage the Abbey Theatre in November 1915, but left shortly after the Easter Rising following furious rows with the Abbey’s “undisciplined” actors. 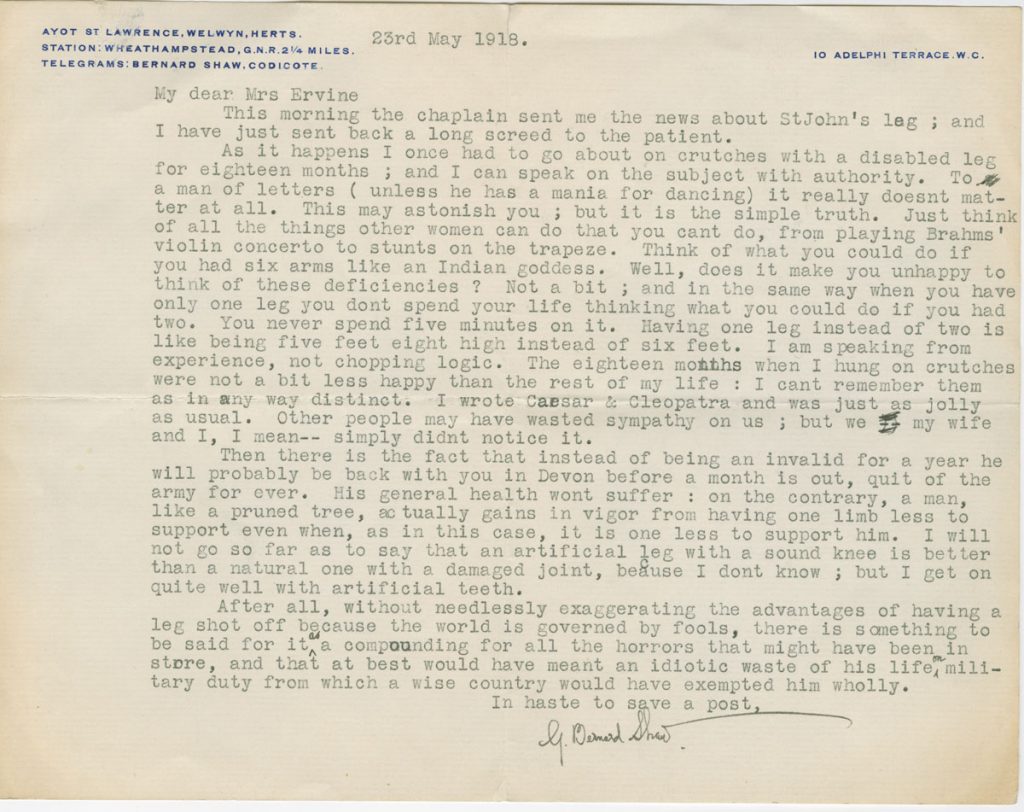 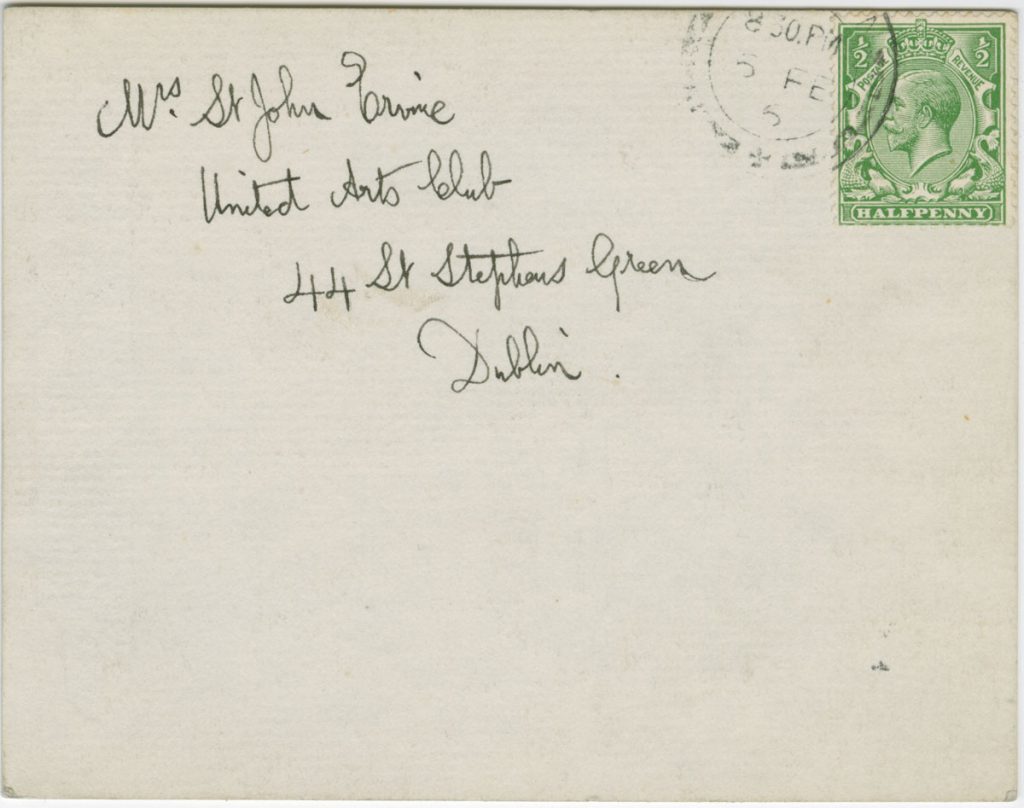 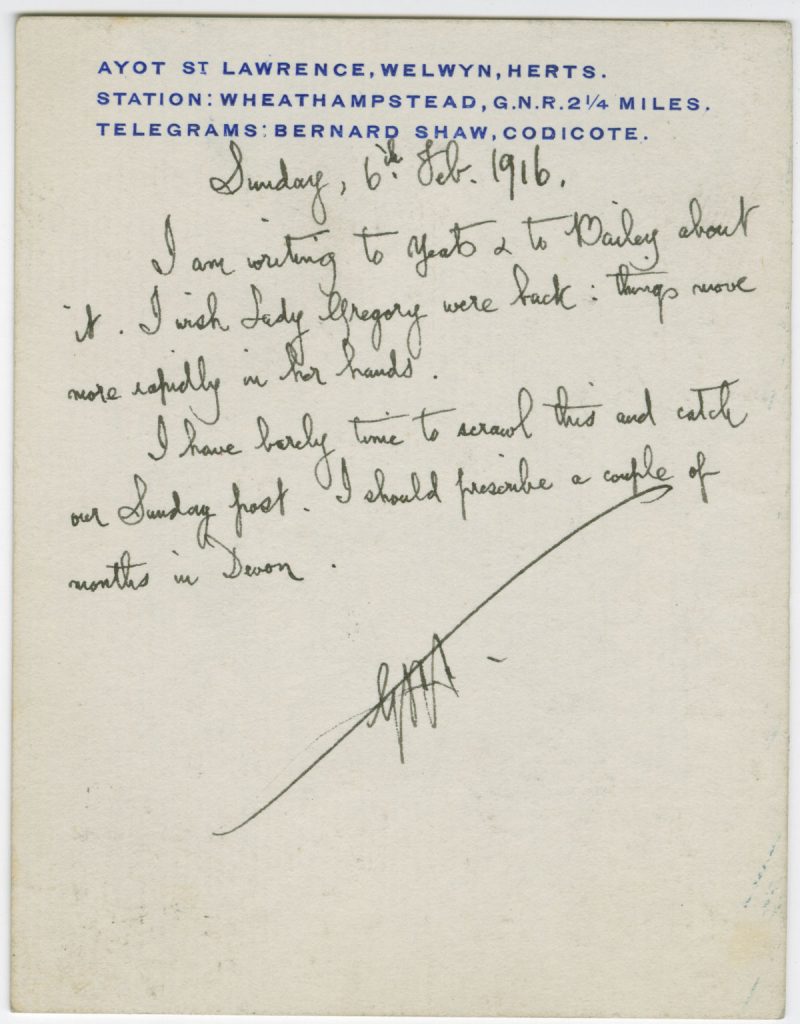 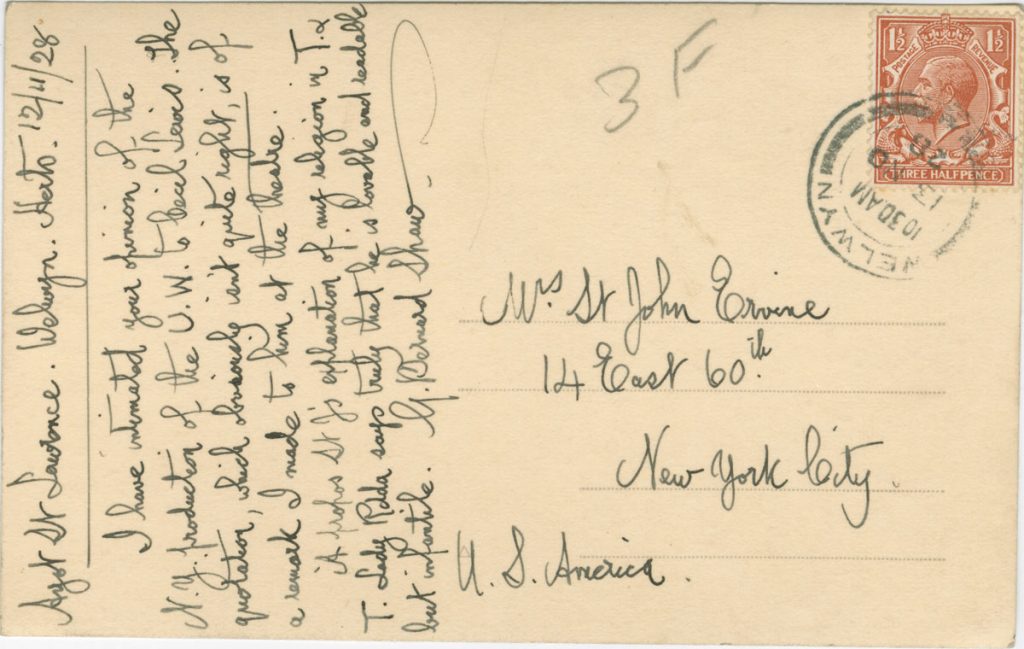 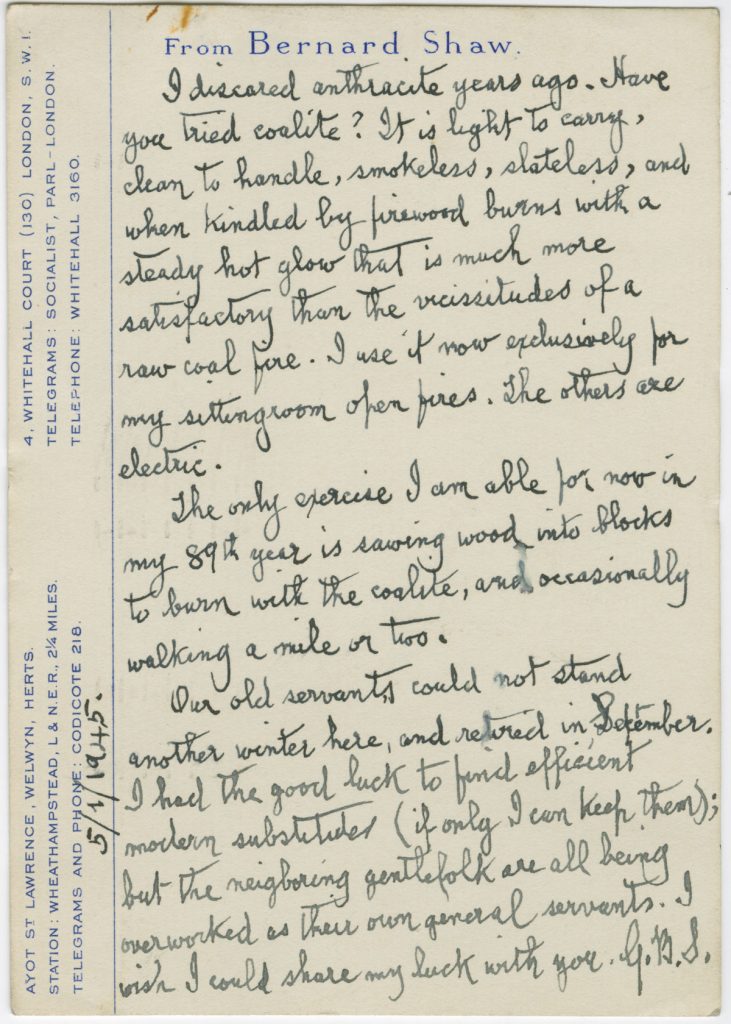 Some of Shaw’s letters to Ervine are held in the British Library in London, but the Ransom Center holds a vast array. They throw much light on Ervine himself and the nature of the “master/upstart pupil” relationship the two shared. While I did encounter some new names, the best and most useful correspondence revealingly came from the “big” names in the collection: Lady Gregory, Shaw, and Yeats. They were the ones having conversations about what was going on in a grand, societal sense. They were the ones who offered, as we might expect, the most original reflections on an extremely tumultuous phase of Irish life.

After losing his leg in March 1918 Ervine was in enormous pain for the rest of his life. He faced this loss at a time when concepts of prosthetic limbs were still quite basic, and so one can only imagine Ervine’s physical suffering. It is probable that this may have contributed to his vituperative manner and explosive temper, which played out—often quite entertainingly—in many newspapers and columns. For example, in a public letter to The London Times dated February 18, 1950, Ervine takes issue with people referring to Winston Churchill as an “old man,” and ends by writing: “There are young men in some Cabinets who would have done good to the world if they had died long ago.” And in a private letter dated October 30, 1948, to fellow Ulster Protestant playwright and BBC producer John Boyd, Ervine refers to the esteemed Irish writer Sean Ó Faoláin. He describes buying Ó Faoláin’s book The Irish (1947) though he found it “a verbose and flatulent work, with almost no meaning in it. O’Faolain is a gasbag, using words at times as if he did not know their meaning and he fancies he is a man of style when he is merely an industrious clerk. Years ago, he wrote a play for the Abbey. It was the damnedest silliest play I’ve ever read by a man with pretensions to quality. You’re waiting (sic) your air on these Eirean (Irish) fellows. They’re no good, and they spend their lives cadging and sponging on the English whom they simultaneously denounce and deride.”

The resident drama critic of the national Sunday newspaper The Observer, Ervine was not completely immobile and traveled regularly, but the vast network of correspondence was clearly a by-product of his injury, which is why it is scattered not just in Austin but also in Indiana, New York, London, and several other British cities. (I enjoyed, incidentally, explaining to Austinites who asked me what I was working on during my stay there that Ervine’s first name is pronounced “Sin-Jin”!)

Though Ervine specialized in a waspish and aggressive coat-trailing, locking horns with many via his sharp reviews and angry spats, the letters in the Center’s collections reveal a different man—flashes of the older Ervine, perhaps. A considerate but still passionate figure with time for people and the humanity that characterized his early and still-performed plays. In January 2013, Ervine’s Mixed Marriage—first performed in 1911—played at the Lyric Theatre in Belfast and won strong audiences and plaudits for its power and relevance. The same play and his extraordinary John Ferguson (1915) played at London’s Finborough Theatre in 2011 and 2014 respectively. 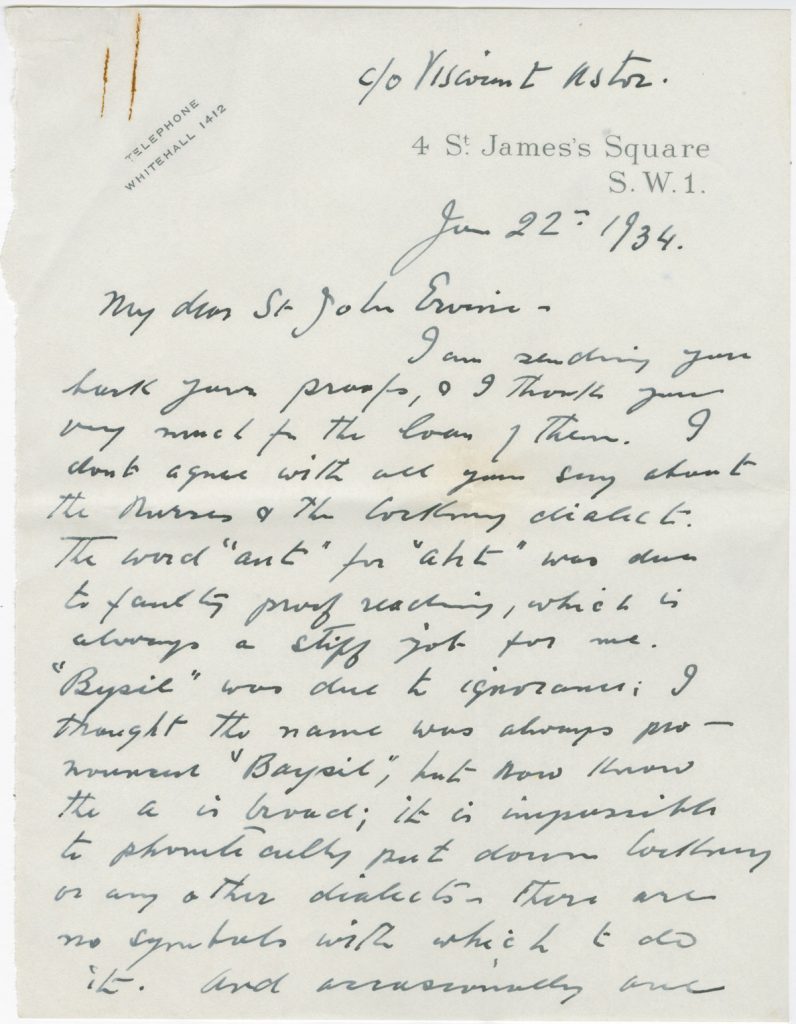 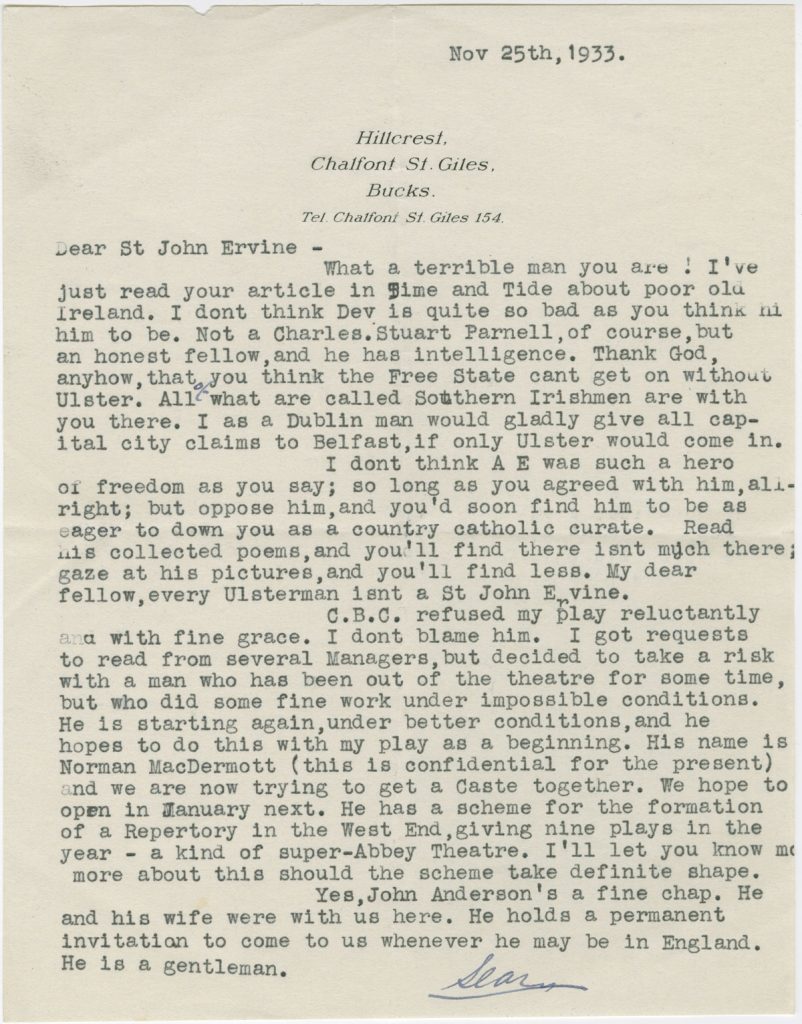 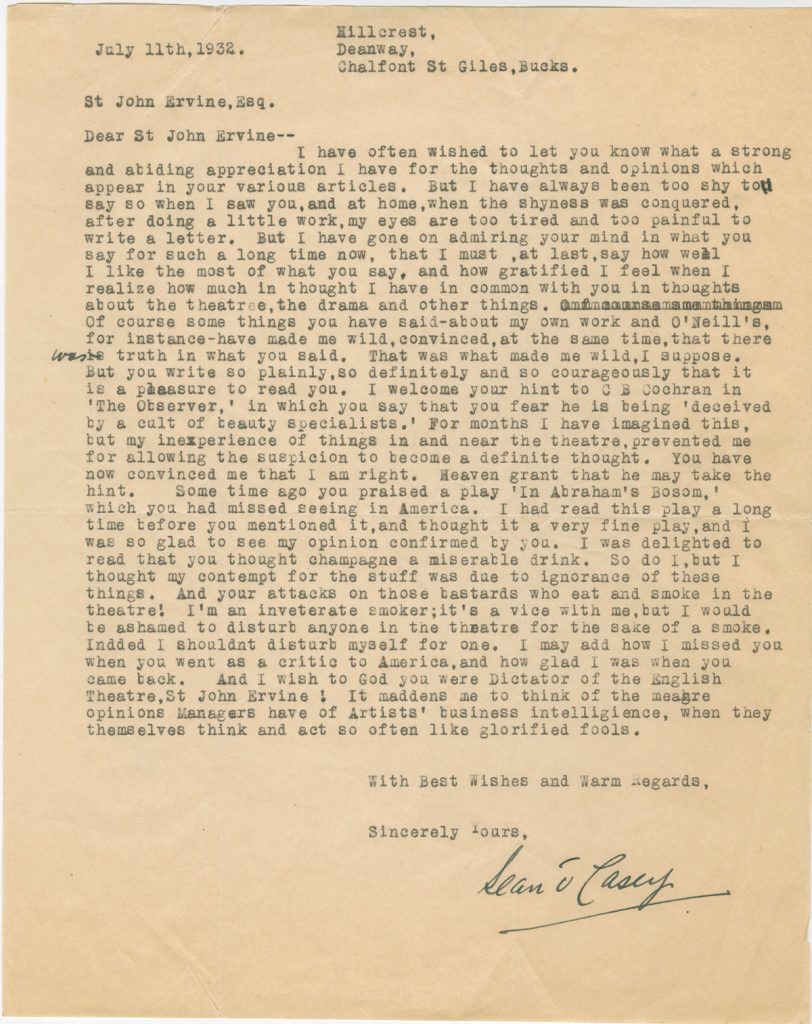 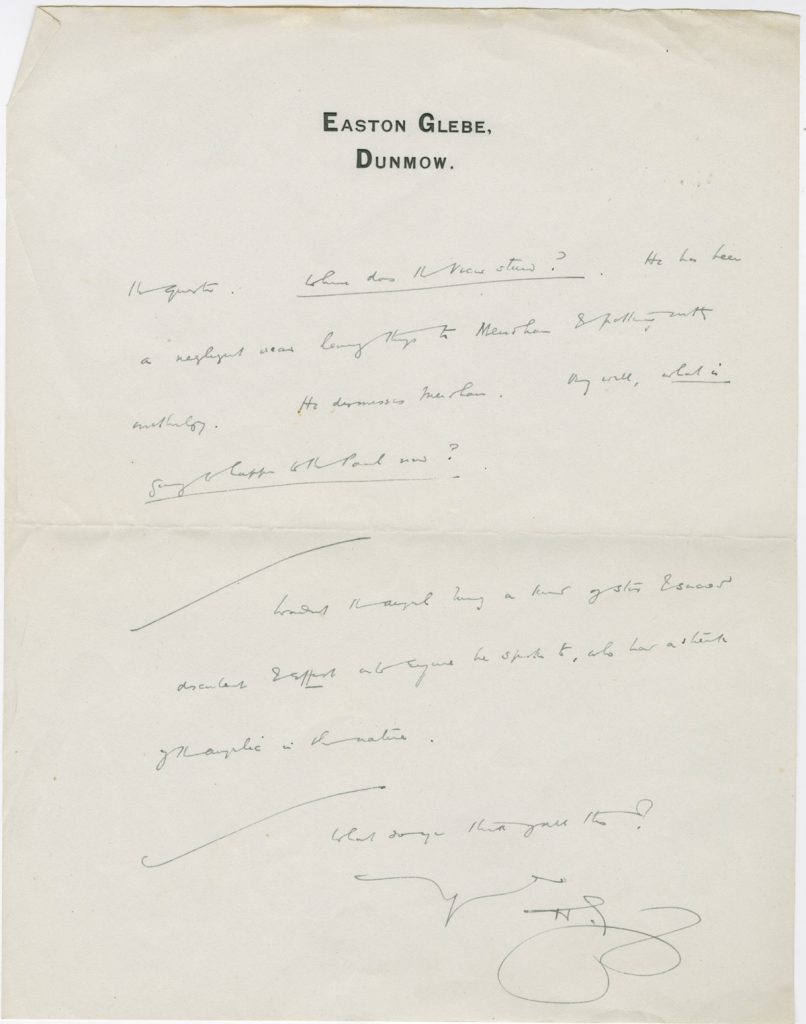 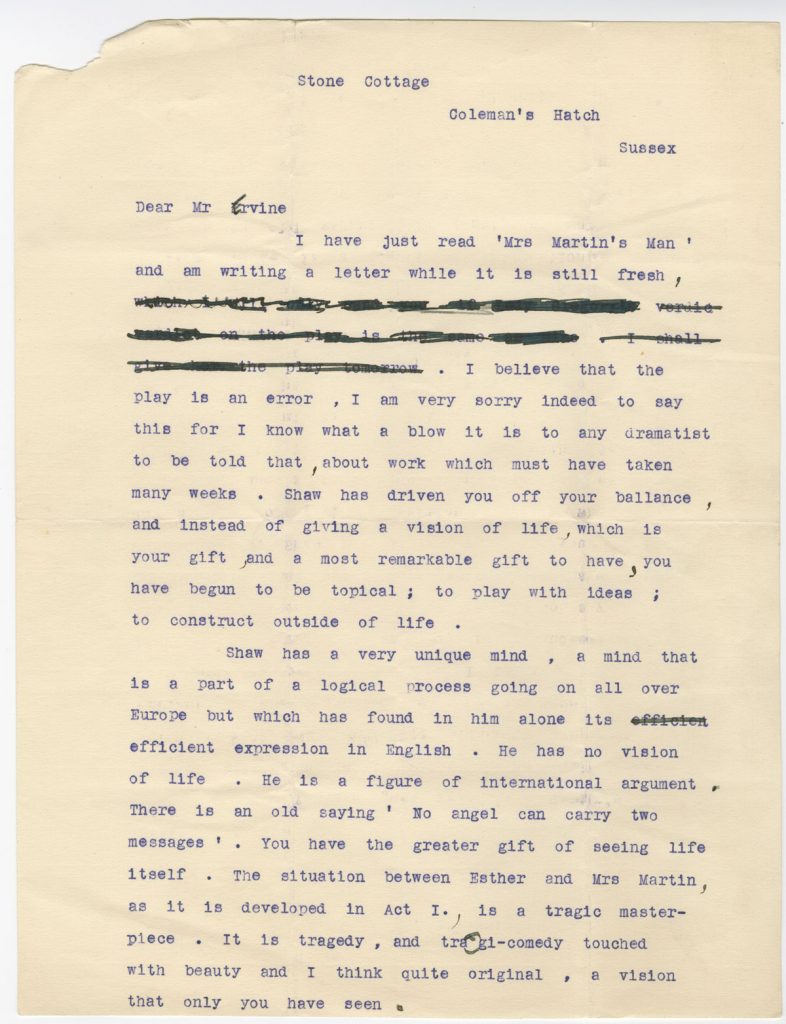 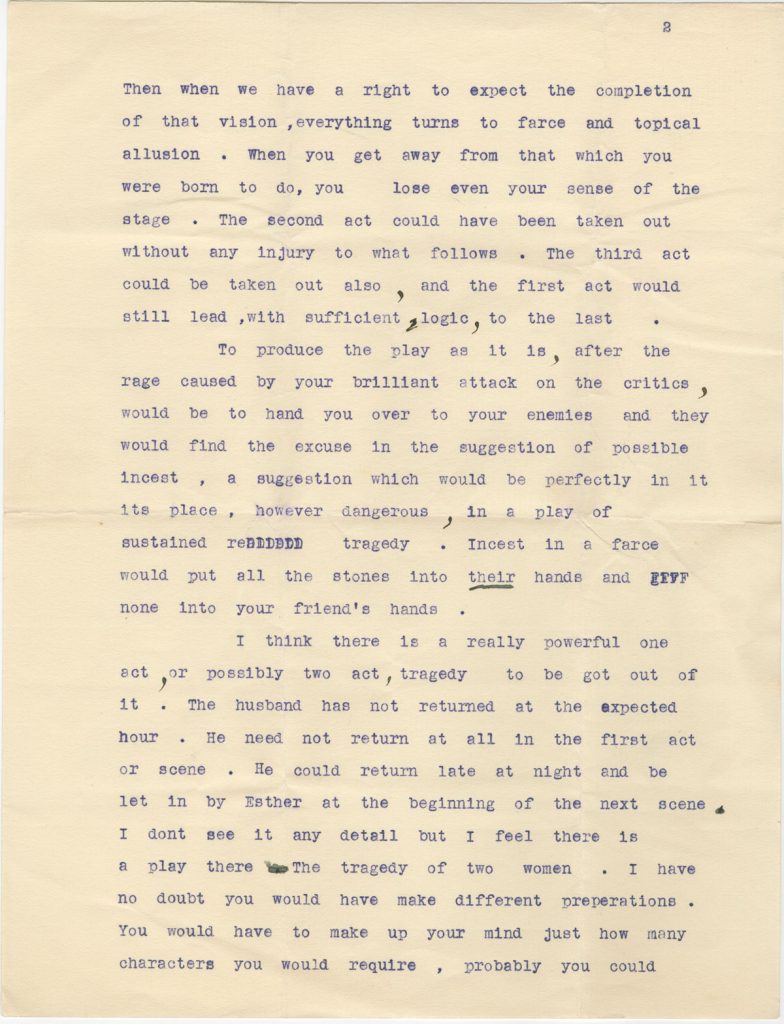 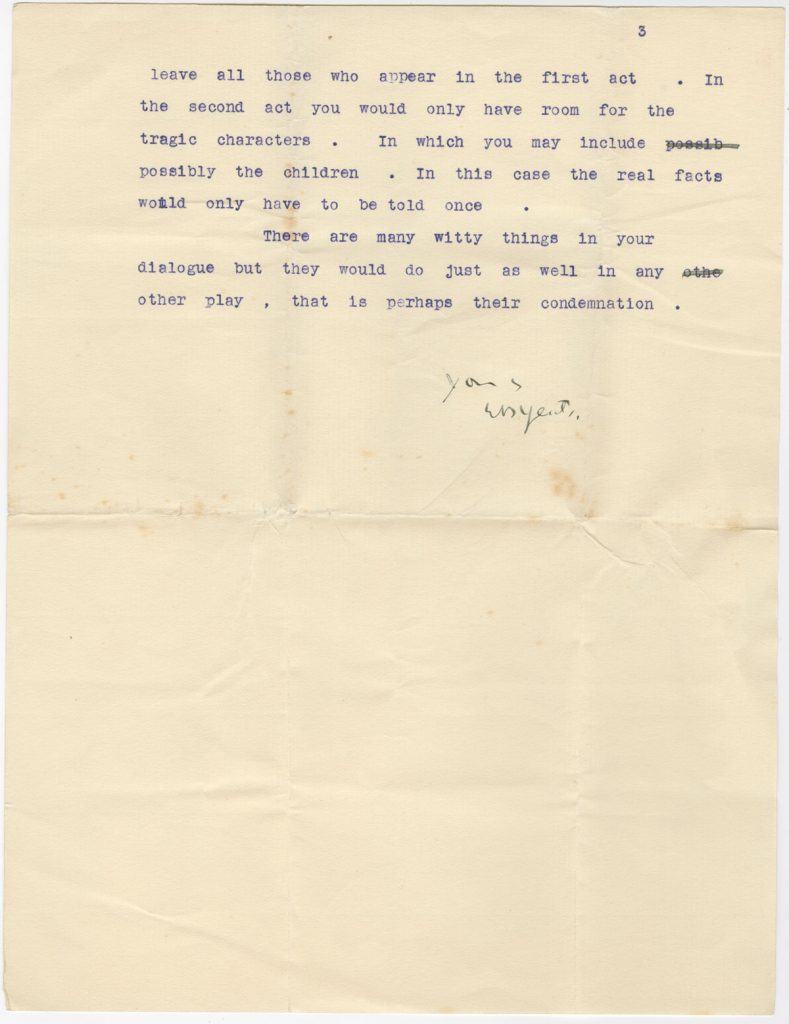 Toward the end of my time at the Center I came across a letter Ervine received from the estate of Horace Plunkett. Plunkett is a sometimes-forgotten but culturally important figure who served in the first Irish Senate as a Unionist and was a pioneer of agricultural cooperatives. During the agitation and land disputes which marked Ireland in the decade from the outbreak of World War One in 1914 until the end of the Irish Civil War in 1923, Plunkett’s home Kilteragh, in the Dublin suburb of Foxrock, was burned down by the Irish Republican Army while he was abroad. This was a famous house—Plunkett had invited Ervine to recuperate in it after the loss of his leg—which contained an enormous, famous library and a trove of papers and records.

The letter was from a man called M. Digby, secretary of the Horace Plunkett Foundation. He lamented to Ervine that the records and papers which were lost in the destruction of the house “may be the only expression of opinion on some aspects of Irish affairs.” Ervine himself seems characteristic of a rich but dwindling vein of thought, but it strikes me that the Center also contains such expressions of opinion on this key era in Irish history. And we have it.

Dr. Connal Parr is a Vice-Chancellor’s Research Fellow in the Humanities at Northumbria University. His first book on Ulster Protestant politics and culture is forthcoming with Oxford University Press. His research at the Ransom Center was supported by the Andrew W. Mellon Foundation Research Fellowship Endowment.