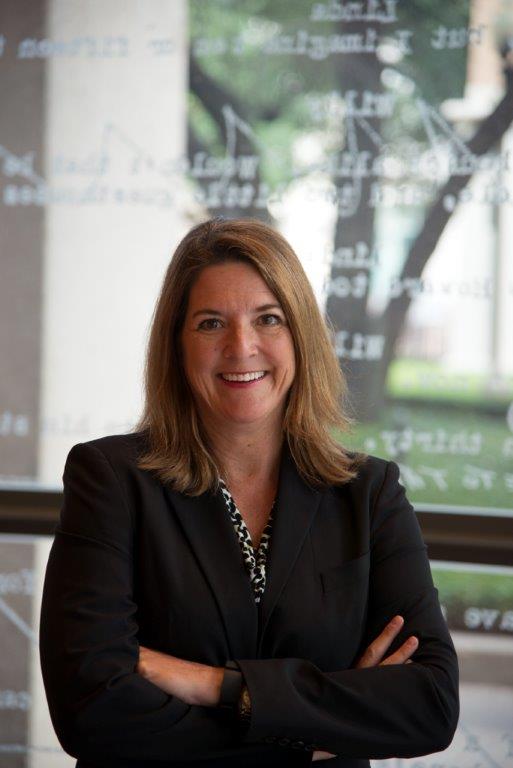 Since coming to the Ransom Center in 2008, Margie Rine has significantly contributed to the Center’s development efforts.

Rine’s duties range from working with individual donors such as the Ransom Center’s Advisory Council members to securing grants from foundations and governmental agencies. She also supports the Center’s director in advancing the institution’s strategic goals. Rine received her B.A. and her M.A. in English Literature from the University of Nebraska and was head of the marketing, development, and sales departments of the University of Nebraska Press prior to her coming to The University of Texas at Austin.

Rine sat down with Cultural Compass to talk about her work at the Ransom Center, exciting upcoming events, and her philosophies on philanthropy.

Tell me about your job at the Ransom Center. What all does being the director of development entail?

My work here is different every day. The charge of the development office is to raise charitable gifts, and we do that in a variety of ways. One way is through our Advisory Council, which is about 45 of our major donors who support the institution financially as well as serving as ambassadors for the Center around the world. It’s a wonderful group of people dedicated to the arts and humanities. We hope to align their passions with the goals of the Ransom Center so their investment of time and money is a rewarding experience for them. We work continually to reach out and broaden our base of support. We also work with numerous foundations and granting agencies. For example, we are in the middle of a National Endowment for the Humanities Challenge Grant. If successful, we will ultimately have a $2 million endowment for our exhibition program, which will produce a steady stream of support to make our program even better. I also raise money through fundraising events, such as our forthcoming gala in April. It involves a lot of logistics, and I am fortunate to have talented colleagues, a gala committee, a host of volunteers, and the assistance of the Advisory Council.

You started off in a literary field—as an English undergraduate and master’s student as well as working with the University of Nebraska Press and editing a literary journal. How did your degrees prepare you for an impressive career that spans so many functions?

My degrees prepared me quite well for my job, and I think they gave me a lot of latitude with career choices. For graduate students in English, many start with the goal of becoming a tenure-track professor, but there is so much they can do with that degree if they really hone a variety of skills. For example, my friend and former U.S. Poet Laureate Ted Kooser worked in the insurance business for a long time. When he retired he started teaching at the University of Nebraska, and told me that he preferred to hire liberal arts students at his insurance company because they could think critically. That’s something that sticks with me. There is so much anxiety around pursuing degrees in fields like English and history, but it served me incredibly well. Reading broadly gives you a look into the human soul that makes you a better listener and observer. In terms of fundraising, those skills are paramount. With a donor, you have to really listen to where they want to make their investment and listen to what is important to them. Writing skills also come in handy. There are many bright people who aren’t good communicators, and that lack of interpersonal skills can prevent them from being successful. Whether you’re writing proposals or talking to someone, having the ability to be persuasive and to make a case is invaluable. Those are skills I learned during my master’s program. I believe I would be a much less rounded person without it.

What are the most rewarding parts of your job?

To be successful in advancing our mission, we have to make strategic investments. We recently endowed our undergraduate internship program and that was exciting because we now have perpetual funding for those internships. And that means we’ll continue to be able to bring in bright, smart students, and then they go out in the world and use the skills they learned during their time here. Giving my colleagues the resources they need to thrive in their positions is rewarding. Several years ago we had an online campaign to conserve costumes from Gone With The Wind that went viral, and to see interest like that yield tangible results is gratifying and just plain fun.

What is taking up the majority of your time these days?

I’m currently organizing the World of Wonders fundraising gala taking place April 22. We have two wonderful honorary chairs, Sally Quinn, who is a journalist and writer, whose late husband, Ben Bradlee’s, archive is here, and Matthew Weiner, the series creator, executive producer, writer, and director of Mad Men. We also have some other special guests coming, like Michael Ondaatje (author of The English Patient), Kate O’Toole (Peter O’Toole’s daughter), Colm Tóibín (author of Brooklyn), and poet Billy Collins. We’re showcasing ten wonderful items from our collections—some of our masterpieces. We’re auctioning off eight packages including original artwork by Ed Ruscha and a Tribeca Film Festival package donated by Robert De Niro and two wonderful photographs by Maggie Taylor and Laura Wilson. We’ll have a VIP reception and a general cocktail hour here at the Ransom Center followed by a dinner by the University’s Tower with performances and music. We are hoping this celebration of the Center’s 60th anniversary will introduce new people to the Harry Ransom Center and engage them in our work.

What do you enjoy doing outside of your work at the Ransom Center?

I’m an avid reader. I particularly enjoy fiction. I recently read A Little Life by Hanya Yanagihara, and I liked it quite a bit. I tend to read more women-focused literature and women writers—Alice Munro is one of my favorites—and the Yanagihara novel is written by a woman about four male characters. I think Yanagihara demonstrates an amazing ability to embrace male characters that I found fascinating. It wasn’t always a pleasant story to read as it involves physical abuse, but it’s a book that has stayed with me. In the last couple of years, I’ve also gone back to novels that I read in my 20s and 30s, and it’s fascinating to have come to a point in my life where I see these books and these characters in much different ways. As I mature, I have a deeper understanding of the relationships people have and am much less critical of some of the characters than I was when I was younger.

I also love to cook and entertain. The conservators here would not likely be pleased to look at my cookbook collection. Many of their bindings are broken and they’re doused with wine, red sauce, and olive oil. There are a lot of good memories within those cookbook pages. My idea of a perfect evening is cooking a wonderful meal for my friends and sitting around and talking.

You must see numerous examples of philanthropy in your line of work. Has giving changed over the years?

I think we’re seeing some changes in that more people feel comfortable participating in online campaigns, but it’s rare that those lead to large gifts. There are some fundamentals about fundraising that will never change; it requires being transparent with donors, matching their interests to priorities of your organization, making them understand that their investment in the organization is important to its success, and then letting them know how meaningful that gift is. For me, when they write the check, that’s just the beginning of the relationship. I don’t think these basics change. Donors want to be involved in the organizations they support; they want to see what their contributions are doing and whom they are affecting.

How do you share the value and importance of being philanthropic?

I’m such a passionate supporter of the arts and humanities that I have little trouble making that case. There are so many worthy organizations that a donor can invest in, whether they be health, education, social, or environmental causes. The thing I always come back to about the importance of the arts and humanities is that they add that texture that we so desperately need. They teach people how to be creative and have empathy. It’s so valuable. Unfortunately, some problems are so severe that it’s difficult to point to tangible change. But here at the Ransom Center, funding an endowment can range from supporting internships and research fellowships to acquiring important collection materials.

One of the most impressive things I witnessed here was during the run of our Alice in Wonderland exhibition—it was so wonderful to see all those young people in the galleries. Getting that next generation involved in the humanities and the arts is critical. It was amazing to see the sense of awe and wonder and the power of literature, photography, or film to provide that sense. Those mediums are so indelibly imprinted on our brains, and without them we’re impoverished in many ways.