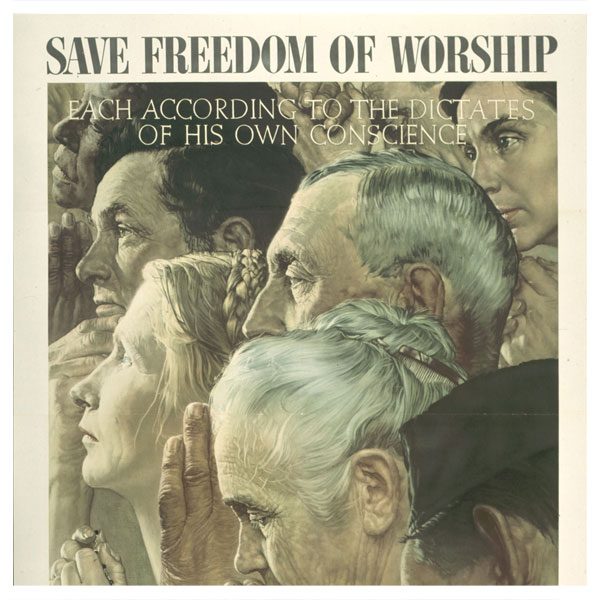 On January 6, 1941, Franklin Delano Roosevelt delivered a powerful State of the Union address. In it the president explained his decision to supply arms and materials to the Allied war effort. Occurring 11 months prior to U.S. entry into World War II, Roosevelt’s speech described the support as a crucial reaction against the threat of a “new order of tyranny that seeks to spread over every continent today”—one that “the American people have set their faces unalterably against.”

Towards the close of the speech and in support of his broader view, Roosevelt outlined what he deemed four essential human freedoms: the freedom of speech and expression, the freedom to worship as one chooses, the freedom from want, and the freedom from fear. The president presented his Four Freedoms as foundations for a world attainable not in the distant future but in his generation, a goal that would require “cooperation of free countries, working together in a friendly, civilized society.”

Roosevelt’s words—and particularly his outline of the Four Freedoms—served as powerful inspiration in the war years to follow, and visual and literary artists explored and drew upon them during World War II.

Norman Rockwell’s series of posters, part of the Harry Ransom Center’s Texas War Records Poster Collection, illustrates the Freedoms as mundane but precious domestic and community vignettes: a working-class man stands to voice his opinion in a town hall meeting; a group of worshipers clasp their hands and bow their heads in prayer; an eager multi-generational family eyes a roasted Thanksgiving turkey; a mother and father tuck their two boys into bed.

Based on his series of oil paintings (today in the collection of the Norman Rockwell Museum), Rockwell’s images were reproduced in four consecutive issues of the Saturday Evening Post beginning on February 20, 1943. Each image was published with an accompanying essay: Booth Tarkington on freedom of speech, Will Durant on freedom of worship, Carlos Bulosan on freedom from want, and Stephen Vincent Benét on freedom from fear. The concept of the Four Freedoms was not without certain controversy, as an editorial in the September 25, 1943, issue of the Saturday Evening Post makes clear (“The Four Freedoms Are an Ideal,” p. 112). But as poignant, straightforward visualizations of the more abstract notions Roosevelt outlined in his speech, Rockwell’s images became ready material for the era’s war-bond posters.

While Rockwell conceptualized the Four Freedoms in quintessential small-town settings, Elmer Rice’s unpublished, undated essay “The Four Freedoms,” part of the Ransom Center’s Elmer Rice papers, paints a slightly different picture. Rice described a varied landscape of individuals who, although from vastly different backgrounds, are united as Americans by the intrinsic value they place on the Four Freedoms. Emphasizing Roosevelt’s assertion that the Four Freedoms were fundamental not only for Americans but “everywhere in the world,” Rice insisted that the path forward is inherently an anti-isolationist one.

The Four Freedoms were reflected upon in musical form as well. Composer George Lessner’s musical sketches for the 1943 Four Freedoms Prudential Radio Program include riffs on “The Battle Hymn of the Republic” and the “Star-Spangled Banner,” demonstrating another form that Roosevelt’s words inspired.

Works by Norman Rockwell, Elmer Rice, and George Lessner are highlighted here in honor of Veterans Day, November 11. This December marks the 76th anniversary of U.S. entry into World War II. Researchers can view these materials and related collections in the Ransom Center’s Reading and Viewing Room.