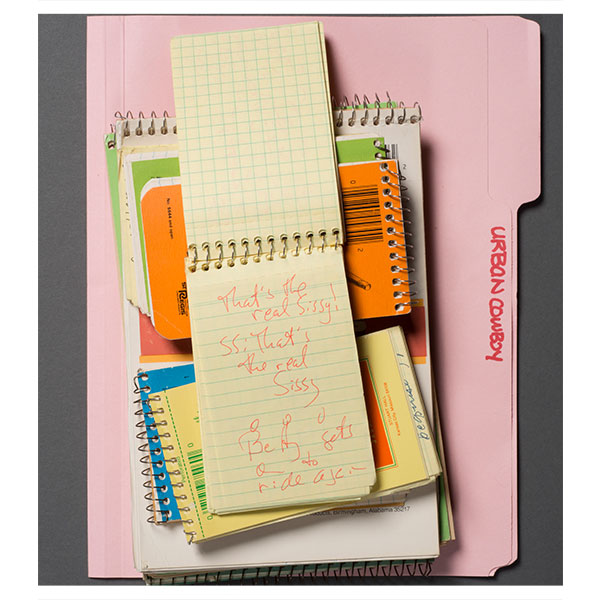 As a native Texan, Aaron Latham knows a thing or two about swagger. The journalist wrote 1978’s Esquire magazine article “The Ballad of the Urban Cowboy: America’s Search for True Grit” and the screenplay of the movie it inspired, Urban Cowboy (1980). Set at the Houston-area honky-tonk Gilly’s, the story is, he says, “of an unusual love triangle: a girl, a boy, and a mechanical bull.” Here, he describes some notes about the character Bud (played by John Travolta in the film) for the Broadway production Urban Cowboy: The Musical (2003). His archive is held at the Ransom Center.

Sometimes it’s time to write a song. Even if you’re not a songwriter. Even if you couldn’t carry a tune in a ten gallon hat. You do it just as a different way of hearing your characters.
Sometimes it’s good to try.
To compress the whole plot into a single song. That tells you a lot about what’s important and what’s not, what you can live without and what you can’t.
Or you can write a small song about one character or even one thing. Take for instance these notes I took for this tune never finished: THE BULL’S SONG Gotta ride that machine Like nothin’ you never seen It may be mean But I’m meaner
That gives you Bud’s unsteady swagger which is who he really is. That’s worth realizing.