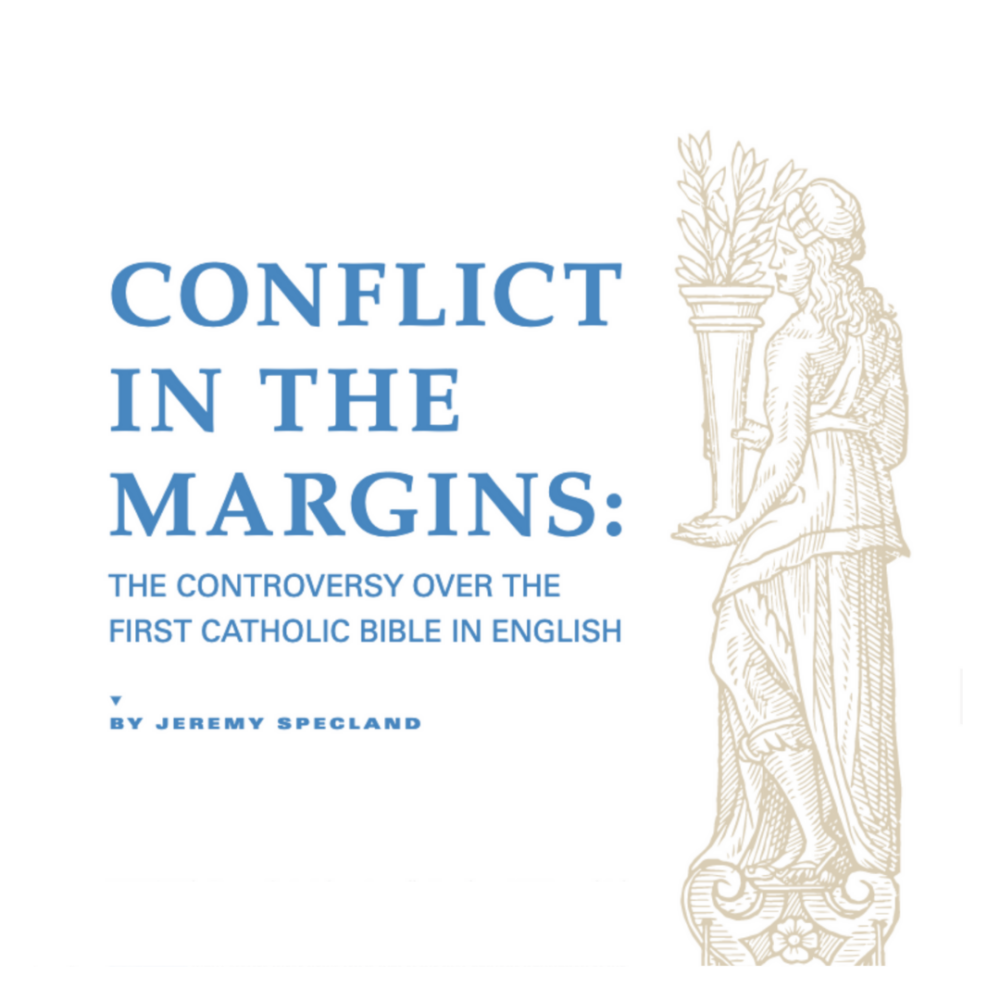 The Ransom Center is home to a collection of over 4,000 items related to a persecuted religious minority: the “recusants,” English Catholics who refused to participate in the Church of England, as mandated by English law from the sixteenth to the nineteenth century.

Among the many stories these items tell is that of the first Catholic translation of the bible into English. Protestant translations had been in print for over 50 years by 1582, when a group of English Catholics living in exile in France brought out the Rheims New Testament, a translation overtly Catholic in nature and complete with printed notes aimed at refuting Protestant doctrine. These exiles then covertly shipped their work northward to England, where all Catholic books were banned, hoping it would support and spread their beleaguered faith. Though the Rheims New Testament did not reconvert England to Catholicism, it did leave an indelible mark on English bible translation, even influencing the famous King James Version of 1611.

It also garnered numerous printed rebuttals by English Protestants. The most extensive was a 1589 dual-columned bible, largely the work of English puritan William Fulke, which reproduced the entirety of the Catholic text alongside the translation from the Bishops’ Bible, then the accepted version of the English church. This large folio volume included Fulke’s point-by-point refutations of the Catholic notes, the intention being that the reader could compare every aspect of the Rheims text with a Protestant counterpoint and observe the flaws in Catholic scholarship. If the Rheims translation aimed at refuting Protestant versions, Fulke’s bible refuted the Rheims translation in turn.

While working on an article entitled “The Elizabethan Catholic Bible and Its Readers,” I was fortunate to have access to the Ransom Center’s extensive holdings in these rare bibles. Among these, I discovered a remarkable 1589 Fulke bible featuring marginalia in a seventeenth-century hand. The markings reveal the bible’s reader to be not a Protestant committed to debunking Catholic doctrine—Fulke’s intended audience—but a Catholic as hostile to Fulke as Fulke is to the Catholic text. Such hostility appears in a series of handwritten ad hominem attacks. “No Fulkes: But the Church,” the reader writes in the margins, “is to teach us the true sense of scripture.” Fulke’s interpretations are “wretched railing stuff and abominable lies,” “against all Christians of all ages,” “simple malice,” and just plain “silly.” The reader’s sympathies appear in frequent accolades of the Roman church, which “ever was and is and shall be the City upon a hill, the visible society of true believers; into which all nations have visibly entered.” One revealing marginal note sums up the reader’s attitude towards Fulke’s refutation: “I suppose we must take his interpretation along with us, or he will not allow us our reading.
Tho[ugh] I fancy we may rely on better authority then his or any of his fellow Gospellers for the true sense of the Scriptures.” That is, grappling with Fulke’s anti-Catholic polemic is the price of access to a version of the biblical text that maintains the authority of the Catholic Church. At a time in England when punishment for mere possession of Catholic books could include torture and death, Fulke’s publication—contrary to his intentions—allowed this reader to peruse the Catholic translation in relative safety, from pages the Protestant majority had printed themselves. The evidence of this rebellious reading now resides safely among the Ransom Center’s collection, where it offers a contemporary window into the religious controversies of the past.

Jeremy Specland, a Ransom Center fellow in 2019, is a PhD candidate in English literature at Rutgers University.