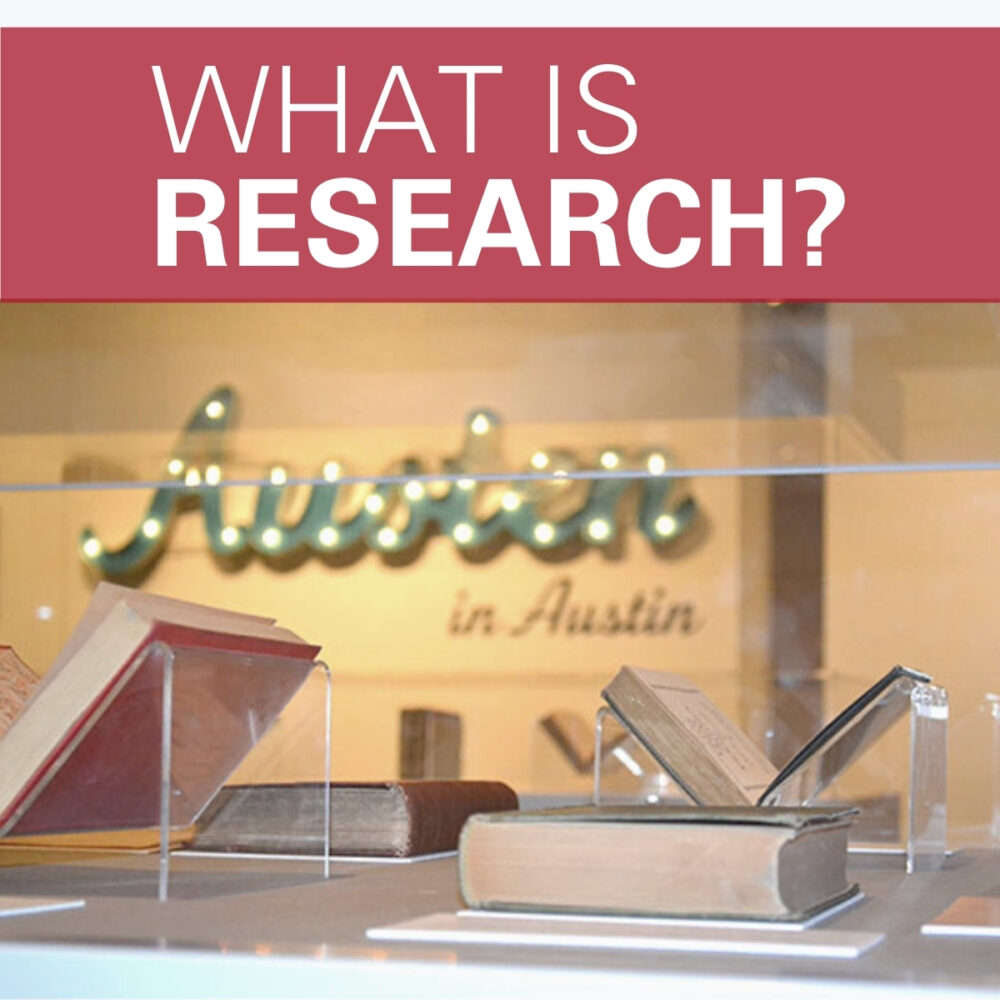 by JANINE BARCHAS
This essay is part of a slow research series, What is Research? Learn about the series and click here to add your voice to the conversation.

On the 18th of November in 1945, Arthur Miller’s radio adaptation of Jane Austen’s Pride & Prejudice could be heard nationwide as part of a special Thanksgiving program. Listeners in New York heard it at 10 p.m. on ABC station WJZ. The show made the list of “Today’s Leading Events” in The New York Times and was the Theater Guild’s most highly rated program that quarter, capturing a 19.4 percent share of the national radio audience. The original recording is worth a listen not only as a TARDIS to 1945 but as the most unlikely comic mashup of two great writers:

Source: Theatre Guild on the Air via the InternetArchive.org

Today, Miller’s role as popular adapter of Austen has been all but forgotten.

If you never suspected that the would-be king of the gritty American stage, Arthur Miller, took a crack at adapting that quiet paragon of Britishness, Jane Austen, you are not alone. I learned of Miller’s 1945 adaptation only when a curator at the Harry Ransom Center, knowing of my research interest in Jane Austen, casually mentioned the existence of a Pride and Prejudice script by Arthur Miller. At first, I mistook his remark for dry literary wit. But the very next day I saw the real thing: the original 1945 playscript is part of the Theatre Guild Archive at the Ransom Center and preserves the one-hour radio play as a typescript marked “as broadcast.” The script was created during young Miller’s early jobbing work for radio. His Pride and Prejudice embodies the type of writing that paid the rent before he had a stage hit of his own—which may explain the lack of critical interest by Miller scholars. Last year, I was able to help bring it back into view as an unsung Austen adaptation (see LARB).

Miller’s radio play, starring Joan Fontaine as Elizabeth Bennet, aired on the celebratory Sunday that was the first American Thanksgiving weekend in the wake of World War II, warranting special programming and reflection. Although America’s recent losses during the pandemic differ profoundly from those suffered during that war, Thanksgiving this year might throw us back to the 1940s in contemplative huddles at home akin to fireside chats.

Research among archives thus enables time travelling into the past. Moving a project forward, however, is a far slower process—one that remains grounded by material realities and constraints. COVID-19 has changed our research access and disappointed those Miller scholars eager to research in, ironically, the newly-opened Arthur Miller archive. When I first leafed carefully through the Theatre Guild script last year, I had taken study photos of all the pages of the original typescript (about 70 pages of central text plus the material it was boxed with, totaling about 100 photos). That time-consuming process is my hard-won habit in any archive that I visit.

Far from a natural inclination, slowing down to photograph every page of an exciting find is always an exercise in uncharacteristic self-restraint, because it interrupts the turning over of materials that a researcher greedily wants to read and devour. And, at the close of a research session, that day’s photos have to be downloaded, edited, and organized while memory of the original remains fresh so that the images do not disappear in the cloud cover of an iPhone. This methodical plodding only pays dividends later, and sometimes not at all – for I have photographed many an item to which I never find a reason to return.

The process makes sense for a far-flung archival research trip. Less so, perhaps, for a peek at a text that lives a few hundred feet from my own university office. However, and as you have already guessed, my photographs have proven a boon during the COVID-19 closures of the reading room. Since a modest audio re-recording project still seemed attainable even with pandemic restrictions in place, I typed up the manuscript from my study photos for a planned anniversary revival of the radio play.

That slow process revealed new data. Accurately transcribing (by retyping) something that substantial is slow going, and in my case made worse by the repetitive strain injury in my “mouse hand” that was my reward for a summer spent building two synchronous online classes on the Canvas platform. (Talk about a slow and numbing process.) But I digress. The halting pace of toggling between the original and my transcription and of retyping each word carefully allowed me to notice things that even close reading overlooks.

Miller’s punctuation, for example, is worth a mention. He peppers the prose of this script with an abundance of exclamation marks. He does not appear to reserve that mark for the idiolects of particular characters or even for scenes of heightened emotion. I’m no Miller expert and do not know whether his youthful exclamatory habit continues in his mature works, but since each of the exclamation points required a two-handed move by my pained typing hands (Shift + 1), I soon groaned at the rate of three per page. Mr. Bennet’s second line: “Elizabeth! You’re not reading this book, are you?!” gives an inkling of how these marks seem far from essential, although they do visually tap out a rapid-fire comic pace that characterizes the 1945 production. The marks seem gratuitous because the radio script was never intended for print and copious stage directions in capital letters already instruct the actors in tone: “(PERTURBED)”, “(HOPEFULLY),” and “(THE GIRLS AD LIB EXCITEDLY OFF MIKE).” I knew I was in trouble when I saw the following line looming on what was only page five: “Goodbye! Goodbye! Goodbye! (MUSIC: UP INTO HUNTING HORN MOTIF, DOWN AND OUT).”

In an effort to speed things up and spare my hands, I trialed the computer dictation software that is part of the standard Word Microsoft suite and which had sat on my computer unused for the last five years. Although it did make things a bit easier on my hands, the technology was not a great time-saver—and yet it proved a surprisingly accurate gauge of how even Miller’s update of a Regency story has now become historically distant. The voice-recognition software seemed unfamiliar with Regency terms and nomenclatures. I did a double take when it created:

And I must talk to you, Mrs. Bennet. Unless I mistook my hearing, when we let the two gentlemen out of the house you invited them to a bar, did you not?

Although I strongly favor the idea of a hard-boiled Mrs. Bennet who invites Bingley and Darcy to a local tavern to become better acquainted with her daughters, I reluctantly corrected that line to the original “ball.” The modern software’s algorithm similarly struggled with throwback terms of address such as “Reverend,” “Lady,” and “Miss.” And when the voice recognition software turned “Miss Bennet” into “my spinach,” it created one of the best lines for Mr. Darcy that neither Jane Austen nor Arthur Miller ever wrote. I was tempted to leave it in.

There were many of these minor distractions and editorial temptations in the three-day transcription process (including an accidental profanity that I cannot share in print), and I suppose those small missteps and anachronisms of diction kept me going as I mimicked a member of the typing pool in 1945. Lest this triggers the thought that the exclamation marks were perhaps not Miller’s own, the text of all the commercial breaks by U.S. Steel Corporation remain blissfully free of his telltale exclamatory marks. I transcribed that text, too, for the sake of visceral authenticity and historical context for the actors. In for a penny in for a pound.

Research among archives thus enables time travelling into the past. Moving a project forward, however, is a far slower process—one that remains grounded by material realities and constraints. COVID-19 has changed our research access.
—JANINE BARCHAS

Sadly, the quick, quick, slow of research tripped over the red tape of copyright permission for performance, which is distinct from permission to publish. As the moment of this writing, permission to re-perform as a new podcast has, after nearly a year of requests to various entities, not yet been attained. When a writer such as Miller is contracted by a third party, ownership to performance rights are made more complex and permission can be slow to sort. COVID-19 has certainly not helped speed things up. One crux confirmed by a new production might be how differently Miller’s adaptation reads on the page than it sounds in the 1945 audio recording. The Theatre Guild radio production muffles Miller’s slightly hokey and standout Americanisms with a mid-Atlantic accent—that linguistic betweenity of Hollywood’s Golden Age that allowed American and British actors to mingle seamlessly in movies and radio.

As a result of the artificial accent, Joan Fontaine, best-known as the star of Hitchcock’s Rebecca (1940), makes for a Lizzie Bennet who sounds as American as she does British. That neutrality was the whole point of the prestigious pronunciation quirk popular with studios. At a time when Britain and America had just fought a war as allies, the familiar mid-Atlantic accent glues together this odd American comic mashup made from pieces of a British classic via the stage play by Helen Jerome that, in its turn, had already inspired the 1940 film with Greer Garson and Laurence Olivier (more mid-Atlantic accents there). Even so, the actual lines that Miller writes for Lizzie are as American as apple pie. I was hoping to hear Lizzie talk in a modern American accent about her mother tracking rich men across “county lines” and about buying her sister Lydia “a harpoon” for hunting men at the ball. In the paper script, the American idioms leap off the page. This, too, will have to wait.

JANINE BARCHAS
Janine Barchas is the Louann and Larry Temple Centennial Professor of English Literature at The University of Texas at Austin. She is the author of The Lost Books of Jane Austen, which led to an exhibition entitled “Austen in Austin” at the Ransom Center in the fall of 2019. She has also contributed to The New York Times, The Washington Post, Los Angeles Review of Books, The Chronicle of Higher Education, and Lit Hub.