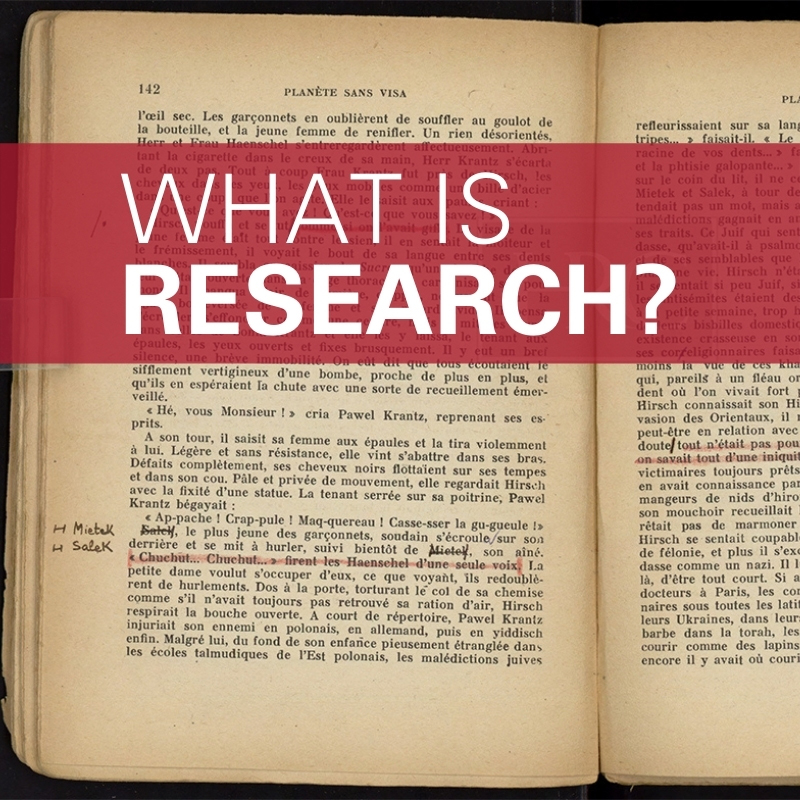 by JULIA ELSKY
This essay is part of a slow research series, What is Research? Learn about the series and click here to add your voice to the conversation.

Researching the life of a novel means uncovering the traces of how it was written—not only the edits, corrections, and additions made to a manuscript, but also the conversations in letters or in diaries that show how these decisions were made. Finding and bringing together these traces reveal what cannot be known when reading the published novel alone. By teasing out these connections, the researcher can be in dialogue with the novel itself in new ways.

When I began to write about the novelist Jean Malaquais (1908-1998), my research took me on a path to archives in France and the United States that mirrored Malaquais’s own trajectory from Europe to the Americas. Malaquais was a Polish-born Jewish writer who immigrated to France in the interwar period via Israel, Senegal, and elsewhere. He wrote about the experience of Jewish refugees in Marseille during the Second World War in his novel Planète sans visa (1947, published in translation in 1948 as World without Visa) as he himself lived it. Like many other Jewish émigré writers, the war did not silence him—rather, it became a crucial period during which he reconsidered what it meant to be a Jewish immigrant and a French author.

This reevaluation appears not only in his novel, but also in his correspondence about the novel—and in a very special copy of the published edition of Planète sans visa held in the Jean Malaquais Collection at the Harry Ransom Center that includes the author’s handwritten revisions. His edits were incorporated into the 1999 edition of the novel in French, which has never been retranslated into English.

The first archival holdings of Malaquais’s writing that I encountered were at the Bibliothèque littéraire Jacques Doucet in Paris. These archives are actually held in the reserves of the Bibliothèque Sainte-Geneviève, a series of wood-paneled rooms nestled away in the imposing Sainte-Geneviève library building. The archive holds letters he wrote to other French authors from the 1930s to the 1960s. During summer of 2015, it was amazing to sit in the Sainte-Geneviève library, where I knew from the only biography of Malaquais that he had spent time.[1] During winter evenings of 1935, he often read at the Bibliothèque Sainte-Geneviève; it was one of the few places with free heat that were open late into the night. In 1935, he was working as a stock clerk at Les Halles, the central food market of Paris. But at night, he was educating himself and becoming a novelist.

In fact, he discovered André Gide’s writings at the library and actually began correspondence with this famous writer. He found in Gide a mentor who gave him the financial and professional support to become a published author himself. One document from the archive that I consulted was a letter that Malaquais sent to the author Henri Calet in May 1942, just before he left France for Mexico, saying that he had begun a novel but knew he could not publish it in France. He did not explicitly state why, but it would have been obvious to Calet that a Jewish, stateless, Trotskyist writer could not appear in print in France in 1942.

When he wrote that letter, Malaquais was trying to leave Nazi occupied France through the port of Marseille, like so many other refugees. He was able to do so through the help of Varian Fry of the Emergency Rescue Committee, with the support of André Gide and Justin O’Brien (a French professor at Columbia University, better known as Albert Camus’s translator). He finished Planète sans visa in 1947 in San Miguel de Allende, Mexico. Shortly after finishing the novel, he moved to the United States where he became a citizen and even taught literature courses at The University of Texas at Austin in 1959. Malaquais’s archives, like his literary career, started in France and continued in America.

The bulk of Malaquais’s archives are located at the Ransom Center and include his professional correspondence. I was lucky to find a significant number of letters exchanged between Malaquais and William Granger Ryan, the American translator of his novel for Doubleday, Doran & Co. Some of the letters were quite exciting: one includes the reader’s report from Doubleday, Doran & Co. that got Malaquais his contract. It gives a sense of how the press first responded to his approach to telling a story about the Nazi Occupation from the point of view of refugees.

One of the pleasures of archival research is coming across a letter that you wouldn’t have expected to be crucial but that turns out to shed new light on the novel. Some of the letters that Malaquais and Ryan exchanged seem on the surface to be fairly banal, as they contain lists of Malaquais’s small edits to Ryan’s translation. One of these letters, dated August 13, 1945, contains such a list of corrections. Among five long pages of edits and questions, Malaquais makes a seemingly small correction—he asks Ryan to change the name of a character.

Translation: Page 10, line 13 from the top: same thing as on page 7: with vehemence [in English in the letter], instead of: distractedly [in English in the letter]. Agreed for: choo-choo. Same page, line 11 from the bottom; Hirsch, instead of Goldmacher. I find myself obliged to change the name of this character, for “metaphysical” reasons. I had intended to have him perish during the course of his escape to Spain; but, although I intended to do so, he firmly clung to life, and I could not execute him; he literally refused to die. So, he took on an appearance that I didn’t recognize as his: continuing to live, he could no longer bear the name Goldmacher, which was a bit contrived, and I had to rebaptize him. Also, throughout the book he will now be called Hirsch. Same page, line 9 from the bottom; the text reads: à partir de demain, that is to say, the very next day.

In this long note, buried among smaller corrections, we learn that Malaquais made a major decision about the character formerly known as Goldmacher. He was still writing the original French version of the novel as it was being prepared for translation. Without this letter, there would be no trace of the edit. Goldmacher, a French Jew temporarily residing in Marseille, who leaves on foot with the help of the American Rescue Service (Malaquais’s fictionalized version of the Emergency Rescue Committee) to travel to Spain to get to Portugal and eventually to the Americas, was originally meant to die. His path is similar to the one taken by other Jewish refugees who fled Marseille, most notably Walter Benjamin who tragically did not make it on this route. But Malaquais had Goldmacher live, now with the name Hirsch. When we meet Hirsch, he sees himself as the last of the line of French Hirschs. He had lost a son at Dunkirk; another son was taken prisoner by the Nazis. His father is interned in the Drancy transit camp outside of Paris. If he had perished as Goldmacher, the French Jewish line would be dead. But as Hirsch, his line lives on.

Researching the life of a novel means uncovering the traces of how it was written—not only the edits, corrections, and additions made to a manuscript, but also the conversations in letters or in diaries that show how these decisions were made. Finding and bringing together these traces reveal what cannot be known when reading the published novel alone.
—JULIA ELSKY

Through this seemingly small edit, we learn something about Malaquais’s writing process: the characters seem to have a proverbial life of their own, an existence of their own that makes demands on the author. This letter, and others like it, underscore another aspect of Malaquais’s history: he was an amazingly talented polyglot—he spoke French, Polish, German, and Russian fluently and read Spanish; he not only wrote his novel in his adopted language of French but also showed his skills in English when corresponding with his American translator. His letters with Ryan are a wonderful mix of French and English.

The story of the novel Planète sans visa does not end at its publication date in French in 1947 and in English in 1948. He revised the novel for its reedition in French, which was published in 1999 just after his death. No new English translation has appeared, so these changes are only available in French. In the 1947 French edition, for example, we see small changes made to a scene in which Hirsch speaks with Polish refugees in Marseille:

Hirsch is expressing his contempt for the recently arrived Jewish refugees who he fears stoke the fires of antisemitic fervor in France. It is an important moment in the text where Malaquais reflects on the different experiences of French Jews and of Jewish refugees in France during the Holocaust, and the fears each group had. On the next page, Hirsch will come to understand that he does really not hate the refugees at all—rather, he is simply terrified by his situation. We see that Malaquais was still editing Hirsch’s speech over fifty years after he began to write it. In addition to some smaller edits, he actually casts a harsher light on Hirsch’s thoughts about the refugees by removing certain lines. This makes Hirsch’s realization of his delusion all the more powerful and his fear all the more intense.

Malaquais’s edits in ink and in red pencil throughout the copy of the novel at the Ransom Center draw out his thought process as he composed this central scene. This copy of Planète sans visa shows Malaquais in dialogue with himself, as he had been with William Granger Ryan. The novel was an ever-evolving creation for the author, and not a static text. Through my research, I was able to find this life of the novel, a life that like Hirsch’s, persists.

Julia Elsky is Assistant Professor of French at Loyola University Chicago. A chapter of her book, Writing Occupation: Jewish Émigré Voices in Wartime France (Stanford University Press, 2020), focuses on Jean Malaquais and is based on her research at the Harry Ransom Center.