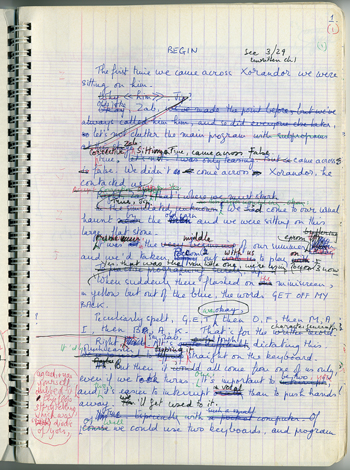 A writer known for her unorthodox and experimental style, Christine Brooke-Rose died on March 21. Her archive is housed at the Ransom Center.

Christine Frances Evelyn Brooke-Rose was born in Geneva, Switzerland, on January 16, 1923. She was the youngest of two daughters of Alfred Northbrook Rose and Evelyn Brooke Rose. After the dissolution of their marriage while Brooke-Rose was quite young, both became Anglican Benedictine monastics.

During World War II, Brooke-Rose served as an intelligence officer in the British Women’s Auxiliary Air Force, where she met her first husband, Rodney Ian Shirley Bax. They married in May 1944 and divorced four years later. In February 1948, she married Polish poet and novelist Jerzy Pietrkiewicz. When Pietrkiewicz became ill in 1956, Brooke-Rose began to write novels after publishing Gold (1955), a metaphysical religious poem based on the anonymous fourteenth-century English poem Pearl.

After her own illness in 1962, Brooke-Rose’s fiction changed dramatically. Her next novel, Out (1964), discarded the traditional ideals of character and plot and began the play with language and form that has marked her work ever since. Some of her more famous works include Between (1968), which centers around the experiences of a professional translator and is written without the use of the verb “to be” in all its forms. Another, Xorandor (1986), is a science-fiction story about the discovery by two children of a silicon-based civilization that feeds on nuclear radiation. The story is written in the form of dialog and computer printouts by the children, who use an invented technological slang.

“As she herself pointed out, Christine Brooke-Rose escaped most would-be canonic labels,” said Lawrence. “She was a narrative theorist, literary critic, and novelist for whom new fictional techniques were necessary to represent the increased ‘unreality’ of the twentieth and twenty-first centuries. Her fictions are rehearsals for living under the constraints of a new world, yet with comedy, nuance, and toughness, they draw creative vitality and moral inspiration out of the very limitations they evoke.

“In different modes, Brooke-Rose’s overtly valedictory last books (Invisible Author: Last Essays and Life, End of), as well as her brilliant novel Textermination, dramatize the ‘death of the author’ and the fragility and tenacity of the connection between language and being. In doing so, they offer what she has called ‘techniques for living,’ new forms for telling the human story within the unreality of contemporary life.”