‘Ain Ghazal is a Neolithic site located near Amman, Jordan. It was excavated between 1982 and 1998 by an American-Jordanian team directed by Gary O. Rollefson, Whitman College, Walla Walla, Wa. and Zeidan Kafafi, the University of Yarmouk at Irbid, Jordan.

‘Ain Ghazal was first settled about 7250 B.C., during the so-called Pre-Pottery Neolithic B (PPNB) period. In a matter of a few centuries the village of stone houses had spread over 30 acres along the Zarqa River. During a prosperous period when the mixed economy increasingly relied on farming, ca. 7250-6000 B.C., ‘Ain Ghazal witnessed what can be termed an explosion of symbolism. The site was abandoned in the Yarmoukian period ca. 5000 BC. The volume deals with the uniquely rich and varied ‘Ain Ghazal assemblage of symbols including tokens of many shapes, animal and human figurines, modeled human skulls, plaster statues and, mural and floor paintings.

The following articles were published in: 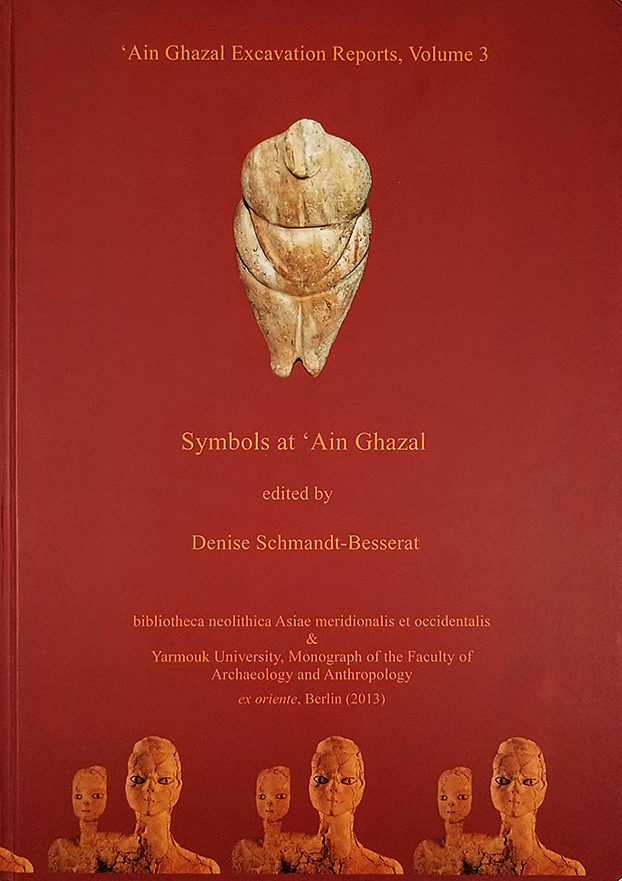 Tokens and Writing: The Cognitive Development

D. Schmandt-Besserat
Abstract: The paper analyses the development of the power of abstraction as illustrated by the evolution of counting in the ancient Near East. Tokens indicate that counting was first done concretely in one-to-one correspondence. The clay tokens, which were used at ‘Ain Ghazal about 7250-6500 bc, abstracted the goods they represented. For example, a cone abstracted a measure of grain. About 3300 bc, when tokens were kept in envelopes, markings on envelopes abstracted the tokens held inside. Abstract numbers are the culmination of the process, following the invention of writing. (p. 56-61)

Harry Iceland
Abstract: A collection of 137 clay and stone tokens from the Neolithic site of ‘Ain Ghazal in Jordan was studied in terms of formal and technological characteristics. The assemblage includes spheres, cones, and other shapes that are well known from Near Eastern token collections. A visual technological classification based on surface and fabric characteristics was supplemented by petrographic and XRD studies of smaller samples of artifacts and local clay and stone raw materials. Results show some correlations between shapes and technological processes and close technological similarities among tokens recovered as groups, suggesting single episode production, use and discard. (p. 31-50)

D. Schmandt-Besserat
Abstract: The excavations at ‘Ain Ghazal generated an assemblage of 151 animal figurines, most of which depict horned animals such as bulls, goats, rams, and gazelles. The artifacts were cursorily made of coarse clay in a style that combined stylized withers and legs with highly naturalistic horns. The disposal of some figurines under house floors or in domestic hearths and their repetitious style suggest that the objects were not simply whimsical representations, but that they instead had a specific function. This chapter reviews how later Mesopotamian magical texts may provide an insight into the ritual use of these prehistoric figurines. (p. 63-111)

The Human Clay Figurines and Ancient Near Eastern Magic

D. Schmandt-Besserat
Abstract: The chapter analyses the forty-nine Pre-Pottery Neolithic B and Yarmoukian anthropomorphic clay figurines.The first part of the study documents the collection: the number of artifacts, their types, style, material, manufacture,surface treatment, and firing. The figurines are then related to their context: their spatial distribution and place in the stratigraphy, their relation to the remainder of the assemblage, and their parallels elsewhere in the Near East. The second part addresses the possible function of the figurines. The objects are shown to match the criteria denoting the perennial ancient Near Eastern magical practices, as described in the cuneiform literature. (p. 113-167)

A Stone Metaphor of Creation

D. Schmandt-Besserat
Abstract: A unique stone statuette, 14 cm high, glorifies pregnancy. The sophisticated geometric composition of the sculpture, based on triangular and circular arrangements, exalts a woman and her bulging stomach, while the material, a pink limestone, celebrates her nudity. The statuette was found in situ, face down, at the end of a stone path, where it might have been displayed for worship in a small shrine of perishable material. The context in which the statuette was recovered suggests that, like their Bronze Age descendants, the early farmers used pregnancy as a metaphor for origin mysteries or the bounty of nature. (p. 169-182)

D. Schmandt-Besserat
Abstract: The chapter analyzes Skull 88-1, the most spectacular plastered skull from ‘Ain Ghazal, placing it in the PPNBplastered skulls tradition by comparing and contrasting it to parallel evidence from ever-larger contexts: (1) the fourteen decapitated heads at ‘Ain Ghazal, including five plain, three painted, and six plastered skulls; (2) the assemblages of plastered skulls in seven other Levantine sites including Jericho, Beisamoun, Kfar HaHoresh, Yiftahel, Tell Aswad, TellRamad, and one Turkish site, Kösk Höyük. Lastly, skull removal and plastering are considered in light of ancient NearEastern iconography and early historical texts presenting decapitation as an abomination. (p. 215-245)

D. Schmandt-Besserat
Abstract: This final part of the chapter devoted to the ‘Ain Ghazal plaster statuary excavated in 1983 and 1985focuses on the style. The analysis includes: (1) a definition of the genre, (2) its evolution between 6750-6500 bc, (3) a comparison with other anthropomorphic representations at the site, (4) a comparison with similar contemporaneous assemblages in the Levant, (5) a review of the possible origin of the PPNB statuary. The paper also assesses the three common interpretations of the statues—ancestors, ghosts, or deities. Finally, the conclusion evaluates the significance of monumental plastic art. (p. 319-336)

D. Schmandt-Besserat
Abstract: Painting on interior walls and floors of houses was a common practice at ‘Ain Ghazal. The chapter describes the panels of flat white or red color and the few red-on-yellow, or red-on-white linear compositions. The colorants are discussed, in particular lime for white, ochre for red, and limonite for yellow, as well as the techniques involved. The ‘Ain Ghazal assemblage is then compared to those of contemporaneous sites before reviewing the traditional ancient Near East color symbolism as revealed by the Bronze Age cuneiform texts. Finally the paintings are shown to reflect the cognitive skills of a Neolithic community. (p. 337-353)

D. Schmandt-Besserat
Abstract: The excavations at ‘Ain Ghazal produced a collection of eight types of symbols including tokens, animal and human figurines, statuettes, statues, modeled skulls, standing stones, and paintings. The rich assemblage is significant in three major ways: 1. It sheds light on Neolithic communication; 2. The evolution of symbolism can be studied in relation to the site extensive stratigraphy; 3. It brings attention to the dominance of anthropomorphic symbolism. (p. 361-366)