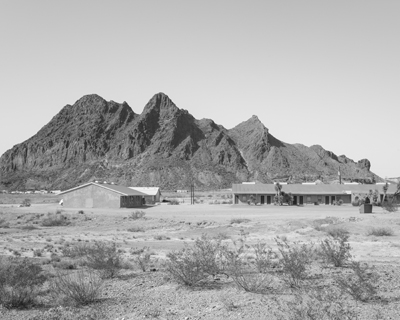 As photographer Jason Reed sat in the reading room of the Ransom Center, awaiting a box of Walker Evans photographs, he noticed a binder on the reference shelf nearby. In what he calls a “moment of coincidence,” he picked it up and discovered notes and captions describing photographs of West Texas—both the place he grew up and the area he has spent his life exploring through video and photography.

The binder contained a finding aid to the work of early-twentieth-century photographer W. D. Smithers, whose archive is held by the Ransom Center. Although 80 years separate the two artists, their work shares an uncanny similarity—take Reed’s Motel, Terlingua (2011) and Smithers’s View of Study Butte, Texas (1932) as an example.

The relationship between archives and the work of modern-day artists is the subject of the Ransom Center’s current exhibition Contemporary Photographic Practice and the Archive. Created in conjunction with the Lakes Were Rivers collective, an Austin-based group of artists working in photography and video, the exhibition highlights members’ works that were influenced in some way by the Ransom Center. Approximately 50 new works are displayed alongside Ransom Center collection materials chosen by the artists.

Smithers began his career in commercial photography when he was 15 years old, eventually working as an aerial photographer for the U.S. Army Aviation Service during World War I. Between 1935 and 1939, under a contract with the International Boundary and Water Commission, Smithers photographed the entire U.S.-Mexican Border from Brownsville to San Diego.

Reed, too, focuses on the interplay between culture and land in the Texas-Mexico borderland. By pairing his and Smithers’s works, he said, “I work to elicit historical comparison and dialogue with the past while also creating space to reflect on photography’s role as an index of place and time, its inherent limitations in telling histories, and the archive as a catalyst in forming new ways of seeing.”

Motel, Terlingua and View of Study Butte, Texas are on display in the Ransom Center until August 4. On July 18, the artists of Lakes Were Rivers will discuss their work at 7 p.m. in the galleries.