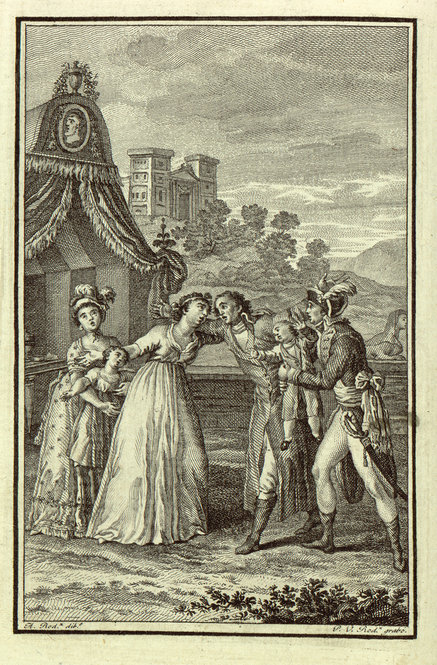 The Texas collection of comedias sueltas at the Ransom Center contains over 14,000 titles that provide valuable insight into Spanish literature from the second half of the seventeenth century through the nineteenth and early twentieth centuries. Thanks to a grant from the Council on Library and Information Resources, Cataloging Hidden Special Collections and Archives program, the cataloging work on this collection continues and is expected to be completed by February 2014. The cataloging of these items has revealed numerous interesting titles and phenomena, including illustrated sueltas.

A scene illustration is often an engraving of the characters in a moment of action. The actors are shown in costume, and the viewer can see the emotions on the faces of the actors. These illustrations are perhaps the most informative about the actual conception of a play. They are also, however, the rarest type of illustration. Images of the following scene illustrations can be seen in the slideshow.

The earliest illustrated suelta dates from 1775. The sueltas at this time generally consisted of text alone. One illustrated suelta includes a fairly crude scene illustration of a child being bathed and a woman ironing. The suelta, titled Letra a la tonadilla de la planchadora, was bound with a manuscript suelta called Sacristan y la viuda. Both items have received significant conservation work to separate and repair them. Ransom Center conservators also removed a sheet of tissue mounted onto the illustration.

The suelta Misantropía y arreptentimiento features a scene illustration unique for a number of reasons. First, the item is dated 1800, which is early in the suelta publishing phenomenon and even earlier in terms of suelta illustration. Furthermore, it pictures an artist’s elegant conceptualization of a dramatic moment in the play outside the confines of the theater. This engraving shows the moment taking place in “real life,” rather than on the stage.  This illustration is far more artistic in nature than typical scene illustrations.

The illustration in Roberto el Diablo is more typical in style of the scene illustrations found in the sueltas. For instance, note the stylized, almost cartoonish, faces and bodies of the characters and their exaggerated body language. The action is being emphasized, while the scenery lacks detail.  The presence of illustrations printed on the wrapper is also uncommon. It was not until later in the century that illustrated wrappers and the use of colored ink became more wide spread.

Boquerón and Nina are both exceedingly flamboyant characters and the namesakes of the respective plays in which they are featured. Boquerón is a female actress dressed as a ridiculous male character. Note also that an enterprising reader has added a mustache and beard to Boquerón’s face. Nina is a scantily clad woman warrior. She is later featured in a sequel called Seña Manuela in which her costumery may be noted to be equally spectacular, but certainly less risqué.

Stage diagrams are particularly illustrative of the mechanics of the Spanish theater.  A diagram shows how the stage was designed and where certain important props or scenery were placed. In an adaptation of Victor Hugo’s last novel Ninety-three, the stage diagram shows how a stage is altered after a set change. Particularly interesting is the presence of the “puerta secreta,” or secret door. Furthermore, this diagram helps the reader understand how the stage blocking would have looked to a theatergoer.