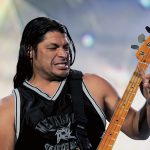 BY LUIS ZAPATA When the mode of the music changes, the walls of the city shake. —Allen Ginsberg, paraphrasing Plato ROCK ’N’ ROLL has been the soundtrack of youth rebellion for almost eight decades. It is one of the United States’ most powerful cultural exports to the world. It may seem cliché to … END_OF_DOCUMENT_TOKEN_TO_BE_REPLACED