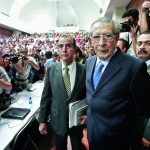 BY IRMA ALICIA VELÁSQUEZ NIMATUJ Transitional justice refers to measures both judicial and non-judicial that are intended to redress large-scale human rights abuses. In this article, I focus on two recent cases of transitional justice in Guatemala. The first is the 2013 trial against General and … END_OF_DOCUMENT_TOKEN_TO_BE_REPLACED