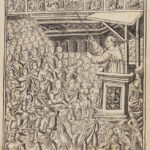 BY ALBERT A. PALACIOS THE VICEROYALTY OF NEW SPAIN was a royal territory in the Spanish Empire formed soon after the invasion and conquest of the Aztec Empire in 1521. Even though the viceroyalty was not formally founded until 1535, the Spanish Crown set its administrative bedrock the year after … END_OF_DOCUMENT_TOKEN_TO_BE_REPLACED