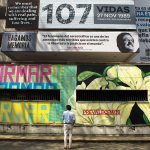 BY RICARDO CASTRO AGUDELO COUNT TO FOUR. One number per second. One . . . Two . . . Three . . . Fo . . . Nearly four seconds. That’s how long it took for the Monaco building to collapse amidst a slow-rising cloud of gray dust on February 22, 2019, in Medellín, Colombia. The Monaco, an … END_OF_DOCUMENT_TOKEN_TO_BE_REPLACED