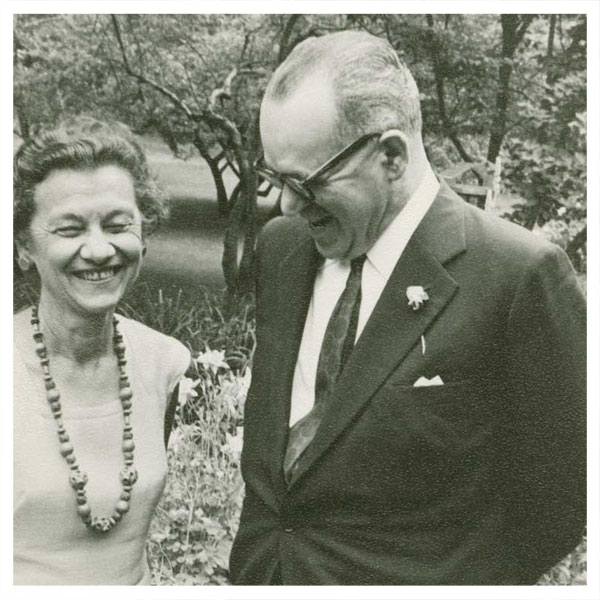 Harriet de Onís was one of the most influential translators of Latin American literature and foresaw its mid-century boom.

In December of 1948, The New York Times ran an article on translator Harriet de Onís titled “Mrs. de Onís puts Latins’ Lore in Book, but Their Cuisine Goes Into Her Kitchen.” The article began by briefly mentioning The Golden Land: An Anthology of Latin American Folklore in Literature, edited by de Onís and published by Alfred A. Knopf just two months earlier, but then went on to reduce her accomplishments to domestic work. The journalist described what the translator cooked for her husband Federico de Onís, a renowned scholar of Hispanic literature, and quoted Carl Ackerman, then the dean of Columbia’s School of Journalism, who said that an “apple pie lesson” that de Onís gave in Venezuela “would do more to cement relations between North and South America than all her literature lectures.” Yet Harriet de Onís was one of the most influential translators of Latin American literature during the mid-twentieth century. In addition to translating approximately 40 books from Spanish and Brazilian Portuguese to English, she edited two anthologies, mentored other translators, wrote reviews, gave lectures, and acted as an editorial advisor for Alfred A. Knopf.

Born Harriet Wishnieff, she grew up in Sheldon, Illinois, and moved to New York to study foreign languages at Barnard College, graduating in 1916. After working for a time as a secretary for dancer Isadora Duncan, she decided to pursue graduate work in Spanish at Columbia University. She then managed the Spanish department at Doubleday, Page & Co. and edited an anthology titled Today’s Best Stories From All The World (1922), a volume associated with her work as editor at World Fiction magazine. While at Columbia, Harriet met Federico de Onís, a professor from Spain who had founded Columbia’s Instituto de las Españas, later renamed the Hispanic Institute. The couple married in 1924. Through Federico and the Hispanic Institute, the translator met most of the leading Latin American authors of the time. These contacts certainly boosted her career, but she was an influential figure in her own right.

De Onís’s first book translation was an abridged edition of Martin Luis Guzman’s El águila y la serpiente, a semi-fictional memoir of the Mexican Revolution translated as The Eagle and the Serpent. The translation was published by Alfred A. Knopf in 1930, a time of increased U.S. interest in Latin America. Before the beginning of the twentieth century, there was very little Latin American prose available in English translation. As the first truly prolific translator of Spanish and Portuguese into English, de Onís helped establish the canon of translated Latin American literature in the U.S. For a number of the works she translated, including The Eagle and the Serpent, she also acted as an editor and abridged texts to conform to Knopf’s specifications. In addition, she promoted some writers so effectively that one of them, Colombian author Germán Arciniegas, asked her to represent him as a sort of unofficial literary agent (she declined, though she maintained a close relationship with him). De Onís translated books by Alejo Carpentier, Ernesto Sabato, Ricardo Güiraldes, Jorge Amado, Alfonso Reyes, Fernando Ortiz, João Guimarães Rosa, Gilberto Freyre, and other Latin American authors. The majority of her translations were published by Alfred A. Knopf. 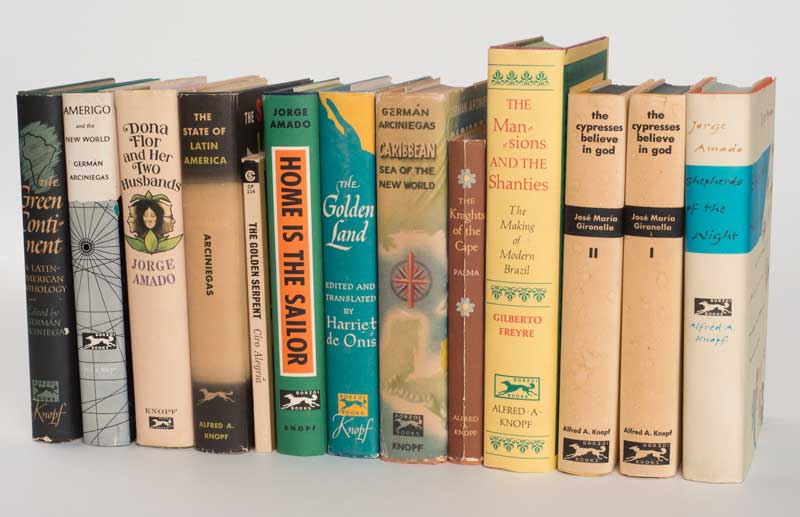 De Onís maintained regular correspondence with Alfred and Blanche Knopf, editors such as Herbert Weinstock, and many of the writers whose work she translated. These letters, which are archived in the Alfred A. Knopf, Inc. collection at the Ransom Center, offer insight into the ways in which her choices as a translator were shaped by her biography, political contexts, and market forces. Her Golden Land anthology, for instance, was published during a time when Good Neighbor policy sentiment still lingered, and the book was marketed and reviewed accordingly. Later, she recommended the publication of books that examined themes relevant to McCarthyism and the Cuban Revolution. She also seemed to foresee the Latin American Boom, the publishing phenomenon that saw writers such as Gabriel García Márquez rise to international prominence. In 1956, she wrote to Blanche Knopf saying, “As Charles Poore once said to me, whenever we run into international difficulties we start loving Latin America again, and I think such a moment has come in view of the Russian overtures in those areas. There will probably be a big upswing of at least official interest.”

The correspondence in the Knopf collection also reveals that de Onís’s influence extended beyond her work as a translator. At a time when Knopf had few editors who could read Spanish and even fewer who knew Portuguese, the publishing house relied heavily on de Onís to evaluate Hispanic and Brazilian texts. Her reports on the books she received often determined whether or not Knopf would publish an English translation of the work. A self-described “glutton for books,” de Onís read, for Knopf and for pleasure, at an incredible pace. In July of 1967, late in her career and just two years before her death, she told Bill Koshland at Knopf, “I have read about eight books in the last three weeks.” At the time she wrote that letter, she was coping with her husband’s death, managing his estate, taking care of her sick mother, and translating Brazilian writer Jorge Amado’s Dona Flor and Her Two Husbands: A Moral and Amorous Tale.

Despite the constant flow of books awaiting her assessments, de Onís often requested that Knopf pay her reading fees in literature. Instead of money, she requested other titles published by Knopf, including works by Alexis de Tocqueville, H. L. Mencken, Albert Camus, and André Gide. However, even if she had consistently requested financial compensation for her work as a reader, her fees would have been low. A 1964 agreement with Knopf shows that they paid her $500 a year to read, evaluate, and report on books in Spanish, Portuguese, and Italian. Translation fees were similarly low. For her translation of Fernando Ortiz’s Cuban Counterpoint: Tobacco and Sugar, published by Knopf in 1947, she was paid a total of $725 for nearly 105,000 words, less than a penny per word. De Onís could afford to devote herself fully to a low-paying career. At home, she had domestic help and never worried about paying the rent. Yet the privilege she enjoyed does not discount the fact that she was a hard-working, dedicated translator. In 1962, she wrote to Alfred Knopf saying that she never needed the money she earned as a translator, but was “intensely interested in helping to bring to the attention of the American public the work of Latin American authors.”

De Onís had a good sense of books that deserved to be translated. In addition to reporting on books Knopf sent her, she pitched authors to them, though not always successfully. In 1952, she sent her editors a volume of stories by Jorge Luis Borges, accompanied by a letter in which she called his work “superb.” She continued, “I am sure there is no more finished writer, or one who knows his craft better in Latin America than Borges.” Editor Herbert Weinstock responded saying, “There is no doubt that the stories of Jorge Luis Borges are remarkable. There is every doubt, however, that a book of them in translation could be sold to the American public. I cannot urge such a book on Alfred and Blanche in view of the uniformly bad sale of Latin American fiction here.” In many cases, however, the editors at Knopf followed her advice. In 1960, they asked her to report on Amado’s Gabriela, Cravo e Canela (later translated as Gabriela, Clove and Cinnamon). After evaluating the book, de Onís told Alfred Knopf that the publishing house “ought to proceed to nail down [Gabriela] before someone else snaps it up… It is absolutely Brazilian and at the same time universal.” Knopf followed her advice and secured translation rights quickly. In 1962, Knopf wrote to de Onís saying, “I purr with pride every time I see Gabriela move up a notch on the best-seller list. You were right about this one breaking the sound barrier.”

At her urging, Knopf also published translations of work by Brazilian writer João Guimarães Rosa. Although she understood the challenges of translating the work of an author often compared to James Joyce for his difficult syntax and use of invented, regional, and archaic vocabulary, de Onís convinced Knopf to publish an English translation of the author’s masterpiece, Grande Sertão: Veredas, which de Onís co-translated (with James L. Taylor) as The Devil to Pay in the Backlands in 1963. De Onís and Knopf did not expect the book to circulate widely, and in fact it was a commercial failure in the U.S. Despite the difficulties Guimarães Rosa’s work presented, de Onis felt that it was important to introduce his books to English-speaking readers. In 1966, she translated the author’s collection of short stories, Sagarana, its title a neologism that remained unchanged in the translation.

For her rendering of Sagarana, de Onís received the 1967 PEN translation prize. In her acceptance speech, she emphasized the importance of translation: “[I]t is not my intention to paint us translators as altruistic souls whose objective or incentive is merely to share with others or bring to their knowledge works of which they would otherwise remain ignorant. I know of nothing that so enriches the spirit and the awareness of one’s own culture as acquaintance with others.” De Onís’s apple pie lessons may have contributed to mutual understanding, but her literary contributions were far more significant and her influence extended well beyond the kitchen.

Livingstone is a Visiting Assistant Professor at Moravian College and an assistant editor at Asymptote. She received an Alfred A. and Blanche W. Knopf Fellowship from the Ransom Center.