The 3D Capstone course in the GDAD Program at The University of Texas at Austin occurs each spring and challenges students to utilize all their new skills to create a final project. Undergraduates from the Departments of Arts and Entertainment Technologies and Computer Science, as well as other departments across campus, were assigned to one of four teams, each of which developed their own unique 3D video game.

Below are the results of the capstone. In Mrs. Fantastic’s Freaky Figurine Shop, 3 children find themselves turned into toys by the owner herself! They must work together to solve various puzzles and find a way to escape Mrs. Fantastic’s magical clutch! 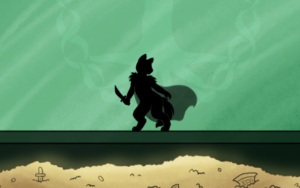 Play as Loki, shapeshifter and infamous trickster, to steal legendary Norse artifacts and gain the upper hand against the Aesir.  Use your cat form to sneak and steal your way through epic landscapes to save yourself from the destructive events of Ragnarok. You’ve lost your twin sister and a mysterious artifact has granted you the ability to cross between the real and spirit worlds. An even more mysterious spirit promises you can use your newfound ability to see her again — but beware the cost to the world around you. Is it one you’re willing to pay? A western odyssey following the attempts of a dead cowboy trying to escape limbo by traversing the desolate halfway place. Unravel the mysteries of your surroundings without losing your grip on your soul, and find your way home.